Blairo Maggi was born on May 29, 1956 in Brazil. Blairo Maggi is the son of late Brazilian agribusiness mogul Andre Maggi, who founded Andre Maggi Group, the world's largest private soybean producer. When Blairo's father died in 2001, his mother, Lucia, also a billionaire, took over as the head of the group, which reported sales of $3 billion (R$6.8 billion) in 2012. The Andre Maggi Group is now headed by Lucia, Blairo, Lucia's daughter Marli Pissollo and Lucia's son-in-law Itamar Locks, also billionaires. Blairo owns slightly more than 16% of the group, which has interests in energy, fertilizers, transportation and rubber extraction. In September 2013 the group acquired control of Denofa, a Norwegian soybean-crushing company, in which it had bought a majority stake in 2009. Blairo's cousin Erai Maggi Scheffer also operates in the soy production business through his Bom Futuro Group, a direct competitor of the Andre Maggi Group. In 2002 Blairo was elected governor of Mato Grosso state, a haven for soybean production. Three years later, after being accused of tearing down rain forests to plant more soybeans, he won Greenpeace's Golden Chainsaw Award, given to the Brazilian most responsible for destruction of the Amazon. Today he is a senator representing the state of Matto Grosso. Recently Blairo has been courting environmentalists by working to dramatically slow deforestation rates, taking on loggers and lobbying hard for the carbon compensation market to keep farmers from cutting down forests while reaping tax revenue for his home state.
Blairo Maggi is a member of Food and Beverage 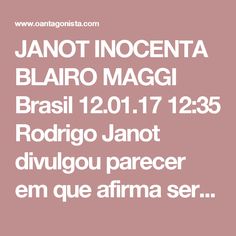 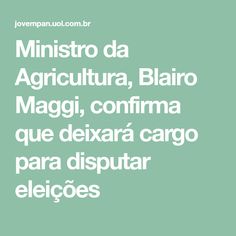 Maggi received the Golden Chainsaw Award in 2006 from Greenpeace for being the Brazilian who most contributed to the destruction of the Amazon Rainforest.

In 2014, Maggi’s net worth is estimated by American magazine Forbes at $960 million, based on his 17% stake in Grupo Andre Maggi.

In November 2017 an investigation conducted by the International Consortium of Investigative Journalism cited his name in the list of politicians named in "Paradise Papers" allegations.

Maggi is the world’s largest soyabean Producer. His accusers hold him responsible for the destruction of the Amazon rainforest. His defenders say he is taking Brazil forward. In this respect he is unapologetic, telling the New York Times in 2003: "To me, a 40 percent increase in deforestation doesn't mean anything at all, and I don't feel the slightest guilt over what we are doing here [...] We're talking about an area larger than Europe that has barely been touched, so there is nothing at all to get worried about".