Yvon Chouinard was born on November 09, 1938 in Ventura, California, United States. Chouinard is founder of outdoor wear maker Patagonia, based in Ventura, California. An avid climber, Chouinard taught himself blacksmithing in 1957 to make reusable climbing tools that wouldn't pollute the environment. His apparel business took off in the 1970s when Chouinard imported rugby shirts from England and sold them to climbers. Since 1985, Patagonia has set aside 1% of sales to finance grassroots environmental groups in the U.S. and abroad. Revenues hit $750 million in 2015.
Yvon Chouinard is a member of Fashion & Retail 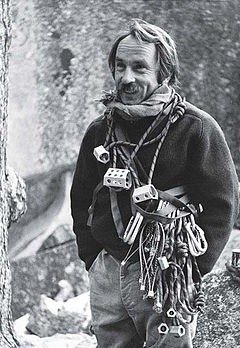 If you want to understand the entrepreneur, study the juvenile delinquent. The delinquent is saying with his actions, "This sucks. I'm going to do my own thing."

Chouinard's Father was a French-Canadian handyman, mechanic, and plumber. In 1947, he and his family moved from Maine to Southern California. His early climbing partners included Royal Robbins and Tom Frost. A Sierra Club member, in his youth he founded the Southern California Falconry Club, and it was his investigations of falcon aeries that led him to rock climbing. To save money, and make adaptations for the way he was climbing, he decided to make his own climbing tools, teaching himself blacksmithing, and eventually started a Business.

In 1957, he bought a second-hand coal-fired forge, and started making hardened steel pitons for use in Yosemite Valley. Between time spent surfing and climbing, he sold pitons out of the back of his car to support himself. The improved pitons were a big factor in the birth of big-wall climbing from 1957 to 1960 in Yosemite. The success of his pitons caused him to found Chouinard Equipment, Ltd.

In the latter 1960s, Chouinard attempted a number of significant technological and technique changes to ice climbing after trips to the Alps in Europe and Sierra Nevada ice gullies in autumn. He removed the flex from crampons, making them more rigid for front-pointing. He drew the taper of a rock hammer into a point for better ice purchase. He increased the cross section of ice screws while also using lighter materials. He experimented with pick and blade issues with ice axes. Prior to this, much of ice climbing was seen as mere step cutting. He attempted to replace hand ice picks (climbing type) with a small ice axe head called a Climaxe.

In 1961, he visited Western Canada with Fred Beckey, and made several important first ascents, including the North Face of Mount Edith Cavell (Rockies), the Beckey-Chouinard Route on South Howser Tower in the Bugaboos (Purcell Mountains), and the North Face of Mount Sir Donald (Selkirk Mountains). These climbs opened his eyes to the idea of applying Yosemite big-wall climbing techniques to mountain climbing, and his advocacy was important to modern, high-grade alpinism. Also in 1961, he visited Shawangunk Ridge for the first time, freeclimbing the first pitch of Matinee (the hardest free climb done at Shawangunk Ridge at the time); and introducing chrome-molybdenum steel pitons to the area, which revolutionized climbing protection. In 1968, he climbed Cerro Fitzroy in Patagonia by a new route (The Californian Route, 3rd overall ascent of the mountain) with Dick Dorworth, Chris Jones, Lito Tejada-Flores and Douglas Tompkins.

Chouinard was one of the leading climbers of the "Golden Age of Yosemite Climbing." He was one of the protagonists of the film made about this era: Valley Uprising. He participated in the first ascent of the North America Wall in 1964 (with Royal Robbins, Tom Frost and Chuck Pratt), using no fixed ropes. The next year, his and TM Herbert's ascent of the Muir Wall on El Capitan improved the style of previous first ascents. Chouinard became the most articulate advocate of the importance of style, the basis of modern rock climbing.

Chouinard is most known for founding the clothing and gear company, Patagonia. In 1970 on a trip to Scotland, he purchased some rugby shirts and sold them with great success. From this small start, the Patagonia company developed a wide selection of rugged technical clothing.

In 1971, Chouinard met and married his wife, Malinda Pennoyer, who was an art and home economics student at California State University, Fresno. They have a son (Fletcher) and a daughter (Claire).

They applied for a U.S. patent on Hexentrics in 1974, and it was granted on April 6, 1976. These are still manufactured by Black Diamond Equipment.

Recognizing that the financial success of the company provided the opportunity to also achieve personal goals, Chouinard committed the company to being an outstanding place to work, and to be an important resource for environmental activism. In 1984, Patagonia opened an on-site cafeteria offering "healthy, mostly vegetarian food," and started providing on-site child care. In 1986, Chouinard committed the company to "tithing" for environmental activism, committing one percent of sales or ten percent of profits, whichever is the greater. The commitment included paying employees working on local environmental projects so they could commit their efforts full-time.

In the early 1990s, an environmental audit of Patagonia revealed the surprising result that cotton was the worst product for the environment. In 1996, Chouinard committed the company to using all organic cotton.

In 2014, Patagonia supported the advocacy documentary film DamNation, which is about changing attitudes in America towards its dams. Chouinard was the executive Producer of the film, and he was also featured in the film commenting about dams.