Richard Scaife was born on July 03, 1932 in United States. Richard Mellon Scaife, a conservative activist and wealthiest living heir of the Mellon family, died in July 2014. Scaife as a young man inherited more than $200 million from the banking fortune built by his grandfather, Richard Beatty Mellon, and uncle, R. K. Mellon. While other contemporary Mellons concentrated on giving money to museums, art collections and education, Scaife became best known for using his fortune to influence politics. He gave $1 million for Richard Nixon's reelection campaign, and reportedly funded groups to dig up dirt on President Clinton. As a businessman, he could have been called Citizen Scaife. He built a media company that included Pittsburgh's Tribune-Review, other small weekly newspapers and a majority stake in the conservative online newsmagazine Newsmax. But Scaife remained reclusive, rarely granting an interview throughout his entire life. He did engage in a highly public feud with his sister Cordelia (a Forbes 400 member until her death in 2005) and two nasty divorces. Scaife was estranged from his son David, according to a relative. He is also survived by a daughter, a daughter-in-law and two grandchildren. The bulk of his fortune will likely go to his right-wing-leaning foundations (The Sarah Scaife and Carthage foundations) and to keeping his newspapers alive.
Richard Scaife is a member of Investments 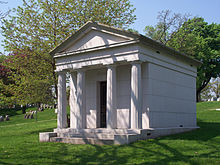 In June 1991, he married his longtime companion Margaret "Ritchie" Battle (born February 15, 1947), who had made the couple active in the social and cultural life of Pittsburgh. The couple subsequently separated, and, on December 27, 2005, the Pittsburgh Police responded to a call placed by Richard Scaife reporting trespassing at Scaife's residence in the prestigious Shadyside section of Pittsburgh. They arrived to find his estranged wife, pounding on doors and peeking in windows of the couple's mansion. Mrs. Scaife refused to leave the property, and was arrested and charged with defiant trespass.

Scaife attended high school at Deerfield Academy in Deerfield, Massachusetts. He was expelled from Yale University in the aftermath of a drunken party and later attended the University of Pittsburgh where his Father was chairman of the board of trustees. Scaife graduated with a bachelor's degree in English in 1957.

Scaife inherited positions on several corporate boards in 1958, when his Father Alan died unexpectedly. However, his family had become estranged from his uncle, R. K. Scaife, who retained control of the companies. His mother encouraged him to get involved in the family's philanthropic foundations, and he did so. (See management of Scaife family foundations.) He inherited much of the Mellon fortune when his mother died in 1972.

As early as 1968, Scaife was actively involved at the highest levels of the Nixon campaign. He was appointed to lead the United Citizens for Nixon-Agnew during the fall of 1968.

However, Scaife supported certain policy research groups which are not explicitly conservative, such as the Center for Strategic and International Studies (CSIS), the National Endowment for Democracy (NED), and the Foreign Policy Research Institute (FPRI), at the University of Pennsylvania, among others. He was also a major donor to abortion rights advocates, including Planned Parenthood, giving "millions" to the organization, although most of the donations ended in the 1970s, according to The Washington Post.

Scaife gained notoriety for evading weak campaign Finance laws to donate US$990,000 to the 1972 re-election campaign of U.S. President Richard M. Nixon. Scaife was not charged with a crime, but about $45,000 went to a fund linked to the Watergate scandal. Scaife later said he was repulsed by the scandal and refused to speak with Nixon after 1973. Following Robert Duggan's suicide and then Watergate, he shifted his political giving from politicians' campaigns to anti-communist research groups, legal defense funds, and publications.

Scaife made headlines in the fall of 1973, when a Tribune-Review reporter was fired for making the remark "one down and one to go" during the Watergate era when Vice President Spiro T. Agnew resigned over corruption charges dating back to his days as governor of Maryland. In the controversy that followed nearly half the paper's 24 person newsroom staff resigned. In 1992, the two main newspapers in Pittsburgh were embroiled in a lengthy labor dispute that ultimately led the larger paper, the Pittsburgh Press, to cease operations, and for the remaining paper, the Pittsburgh Post-Gazette, to suspend publication for nearly six months until the Post-Gazette acquired the Press late that year.

A portion of the fortune was placed in trust funds and the rest in foundations. The trusts expired in 1985 and, per tax law, the foundations must give away 5% of their assets per year. Disbursements from each foundation are done through boards of Directors.

In the late 1990s, during the height of the Clinton scandals, Scaife nevertheless continued to provide more than $1 million to the Corporation for Public Broadcasting, the prime benefactor of the Public Broadcasting Service (PBS). His donations to restore and beautify the White House led to an invitation by Hillary Clinton for a black-tie celebration. She warmly received him and posed for a photograph on the same day her husband's sex scandal hit the press. Scaife told the New York Post that he appreciated Mrs. Clinton's invitation. "I'm honored", he said, "Lord knows, it's more than I got from [the first] George Bush".

Scaife owned a majority interest in Pittsburgh-based all-news radio station KQV. Scaife was prior to 1994 an influential board member of the former Sacramento Union newspaper in the state capital of Sacramento, California.

Scaife also endowed a new school of public policy at Pepperdine University. Independent Counsel Kenneth Starr was named the first dean of this school. Pepperdine has denied any connection between Scaife and the selection of Starr. Starr accepted the post in 1996, but in the ensuing controversy, he gave up the appointment in 1998 before ever having started at Pepperdine. After the investigation, Starr was appointed to head Pepperdine's law school in 2004, and became President of Baylor University in 2010.

On February 8, 1999 former military intelligence specialist and progressive Writer Steve Kangas was found dead less than 60 feet (18 m) from Scaife's office door inside One Oxford Centre in Pittsburgh. He had been an outspoken critic of Scaife and believed that Scaife-funded initiatives posed a danger to the nation. Scaife hired Rex Armistead and a reporter from the Tribune-Review to investigate whether or not Kangas had been out to kill Scaife.

During his life, Scaife was known for his financial support of conservative public policy organizations over the past four decades. He provided support for conservative and libertarian causes in the United States, mostly through the private, nonprofit foundations he controlled: the Sarah Scaife Foundation, Carthage Foundation, and Allegheny Foundation, and until 2001, the Scaife Family Foundation, now controlled by his daughter Jennie and son David.

He was named to the PoliticsPA list of "Sy Snyder's Power 50" list of influential individuals in Pennsylvania politics in 2002 and 2003.

In 2004, Scaife was reported to own 7.2 percent of Newsmax Media, a news-based Web site with conservative political content founded by Ruddy in 1998. In 2009, Scaife reportedly controlled 42% of NewsMax, with Ruddy the 58% majority owner, CEO and Editor.

In 2005, the Pittsburgh Tribune-Review announced that operations of its suburban editions would be consolidated, with "staff reductions" in the newsrooms, Business, and circulation departments. Two managers were laid off immediately along with several other staff members later in 2005.

On April 8, 2006, the Tribune-Review published an article describing a fight between Scaife's estranged wife and three of his servants over a dog that Scaife told the New York Daily News his wife had given him. Both newspapers reported that Scaife's servants went to the hospital for scrapes and bruises after the fracas. Scaife later hung a sign on his lawn: "Wife and dog missing - reward for dog". Three days later, on April 11, Scaife confided to a gossip columnist that he and Margaret Scaife planned to divorce and that their marriage began without a prenuptial agreement. The New York Daily News column estimated his vulnerable assets at half of $1.2 billion.

In September 2007, the Post-Gazette and reporter Dennis Roddy found that the Scaife divorce papers, which had been under seal, were available to the public on the Web site of the Allegheny County Prothonotary's office. The Post-Gazette made the divorce papers available in full on its site. The papers include a full list of the possessions Margaret Scaife alleged her husband had taken and was keeping from her.

Scaife died after a battle with cancer on the morning of July 4, 2014 at his home, one day after his 82nd birthday. Reported by some media incorrectly as "in Squirrel Hill, Pittsburgh," his residence was on Westminster Place, in the Shadyside section of Pittsburgh. He also owned homes in Pebble Beach, California; Nantucket, Massachusetts; and Ligonier, Pennsylvania.