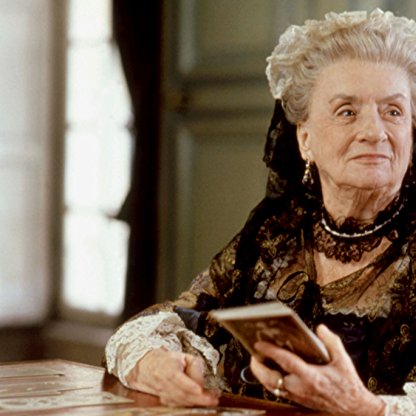 Mildred Natwick was born on June 19, 1905 in  Baltimore, Maryland, United States, is Actress, Soundtrack. A disarming character lady quite capable of scene-stealing, Mildred Natwick was a well-rounded talent with distinctively dowdy features and idiosyncratic tendencies who, over a six-decade period, assembled together a number of unforgettable matrons on stage and (eventually) film and TV. Whimsical, feisty, loony, stern, impish, shrewish, quizzical, scheming -- she greatly enhanced both comedies and dramas and, thankfully, her off-centered greatness was captured perfectly on occasion by such film directors as John Ford, Alfred Hitchcock and Neil Simon.A short, plumpish, oval-eyed figure with a unique flowery, honey-glazed voice, Natwick was born on June 19, 1905 (some sources list 1908) to Joseph (a businessman) and and Mildred Marion Dawes Natwick. The Baltimore native graduated from both the Bryn Mawr School (in Baltimore) and also from Bennett College in Dutchess County, N.Y., where she majored in drama. Breaking into the professional field touring on stage, Miss Natwick joined the Vagabonds in the late 1920s, a non-professional group from Baltimore. She later became part of the renowned University Players at Cape Cod, Massachusetts, whose rising performers at the time included Henry Fonda, Margaret Sullavan and James Stewart.Natwick made her Broadway bow in the 1932 melodrama "Carry Nation," directed by Blanche Yurka with Esther Dale in the title role. In the cast was Joshua Logan, whom she befriended and later corroborated with when he turned director. She then continued her momentum on 1930s Broadway with "Amourette" (1933), "Spring in Autumn" (1933), "The Wind and the Rain" (1934), "The Distaff Side" (1934) "End of Summer" (1936), "Love from a Stranger" (1936), "The Star-Wagon" (1937), "Missouri Legend" (1938), "Stars in Your Eyes" (1939) (directed by Logan), and "Christmas Eve" (1939).Natwick did not come to films until middle age (35) with the John Ford classic The Long Voyage Home (1940), in which she played a Cockney floozie. Despite her fine work in this minor part, she did not make another film until her landlady role five years later in The Enchanted Cottage (1945) supporting Dorothy McGuire and Robert Young. Not a great beauty by Hollywood standards, Natwick learned quickly in Hollywood that if she were to succeed, it would be as a character performer. Ford himself picked up on her versatility and used her repeatedly in several of his post-war classics -- 3 Godfathers (1948), She Wore a Yellow Ribbon (1949), and The Quiet Man (1952).Never abandoning the theater for long, Natwick excelled as Miss Garnett in George Bernard Shaw's "Candida" and as the buoyant medium in Noël Coward's "Blithe Spirit". As for the big screen, she was sporadically seen in such films as Yolanda and the Thief (1945), The Late George Apley (1947), A Woman's Vengeance (1948), The Kissing Bandit (1948), Cheaper by the Dozen (1950) and Against All Flags (1952). Making use of even the tiniest of roles, none of them did much to improve her stature in Hollywood. With her delicious turn, however, in Hitchcock's eccentric black comedy The Trouble with Harry (1955), which starred Shirley MacLaine (in her film debut), John Forsythe, Kris Kringle's Edmund Gwenn, little Jerry Mathers (of "Leave It to Beaver"), and another famous Mildred, Mildred Dunnock, Natwick enjoyed one of her best roles ever on film. This was followed by her scheming and furtive sorceress in the Danny Kaye vehicle The Court Jester (1955) in which she, Kaye and Glynis Johns participate in the memorable tongue-twisting "The pellet with the poison's in the vessel with the pestle..." comedy routine. This, in turn, led to a couple of more, albeit lesser, films, including Teenage Rebel (1956) and Tammy and the Bachelor (1957).Preferring the theatre to movies, MIldred received her first Tony nomination for her sharp, astute work in Jean Anouilh's "Waltz of the Toredors" in 1957 and recreated her character in a TV special. She seemed to move effortlessly from the classics ("Medea," "Coriolanus") to chic comedy ("Ladies in Retirement," "The Importance of Being Earnest"). Receiving great applause as the beleaguered, overly-winded mother in Neil Simon's "Barefoot in the Park" on Broadway in 1963, she transferred the role to film four years later. The cinematic Barefoot in the Park (1967) earned Mildred a well-deserved Oscar nomination for "best supporting actress". She switched things up again with Harold Pinter's theatrical "Landscape," and then again in 1971 when she made her debut in a singing role in the John Kander-Fred Ebb musical, "70, Girls, 70" (1971) in which she earned a second Tony nomination. Her last Broadway show came as a replacement in "Bedroom Farce" in 1979.With only the slightest of gesture, look or tone of voice, Mildred's characters could speak volumes and she became an essential character player during the 1970s as an offbeat friend, relative or elderly on TV and film. She was awarded the Emmy for her playing of one of The Snoop Sisters (1972)_ alongside the equally delightful Helen Hayes in the short-lived TV series. Both played impish Jessica Fletcher-type mystery writers who solve real crimes on the sly. She also played Rock Hudson's quirky mother in McMillan & Wife (1971) and a notable dying grandmother in a guest appearance of the critically-lauded TV series drama Family (1976). Her final film came with a small regal role as Madame de Rosemonde in Dangerous Liaisons (1988) with Glenn Close, John Malkovich and Michelle Pfeiffer.Never married, Mildred was called "Milly" by close friends and family and was the first cousin of Myron 'Grim' Natwick, the creator of Betty Boop for the Max Fleischer cartoon studio and prime animator for Disney's Snow White character. She died of cancer at age 89 in New York City.
Mildred Natwick is a member of Actress 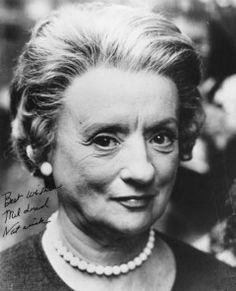 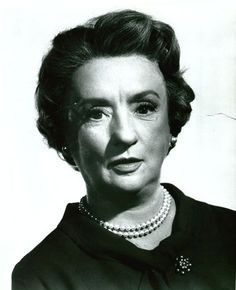 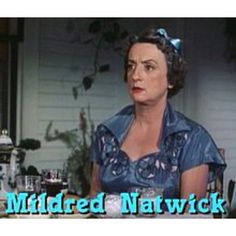 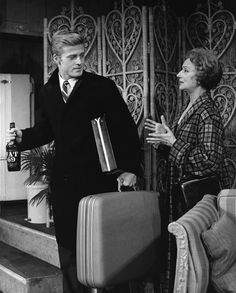 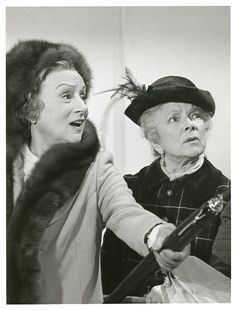 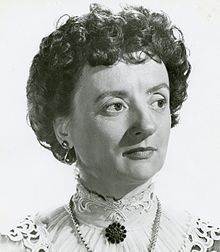 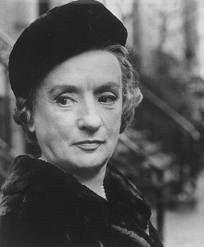 Natwick was born in Baltimore, Maryland, the daughter of Joseph and Mildred Marion Natwick (née Dawes). Her grandfather, Ole Natwick, was one of the earliest Norwegian immigrants to the United States, arriving in Wisconsin in 1847. Her first cousin was Animator and Cartoonist Myron "Grim" Natwick.

Natwick began performing on the stage at age 21 with "The Vagabonds", a nonprofessional theatre group in Baltimore. She soon joined the University Players on Cape Cod. Natwick made her Broadway debut in 1932 playing Mrs. Noble in Frank McGrath’s play Carry Nation, about the famous temperance crusader Carrie Nation. Throughout the 1930s she starred in a number of plays, frequently collaborating with friend and actor-director-playwright Joshua Logan. On Broadway, she played "Prossy" in Katharine Cornell's production of Candida. She made her film debut in John Ford's The Long Voyage Home as a Cockney slattern, and portrayed the landlady in The Enchanted Cottage (1945).

Natwick is remembered for small but memorable roles in several John Ford film classics, including 3 Godfathers (1948), She Wore a Yellow Ribbon (1949), and The Quiet Man (1952). She played Miss Ivy Gravely, in Alfred Hitchcock's Trouble with Harry (1955), and a sorceress in The Court Jester (1956).

She continued to appear onstage, and made regular guest appearances in television series. She was twice nominated for Tony Awards: in 1957 for The Waltz of the Toreadors, the same year she also starred in Tammy and the Bachelor with Debbie Reynolds and Leslie Nielsen and in 1972 for the musical 70 Girls 70. She returned to film in Barefoot in the Park (1967) as the mother of the character played by Jane Fonda. The role earned Natwick her only Academy Award nomination for Best Supporting Actress. One of Natwick's memorable roles was in The House Without a Christmas Tree (1972), which starred Jason Robards and Lisa Lucas. The program's success spawned three sequels: The Thanksgiving Treasure, The Easter Promise, and Addie and The King of Hearts.

In 1971, Natwick co-starred with Helen Hayes in the ABC Movie of the Week, Do Not Fold, Spindle, or Mutilate, in which their characters worked together as amateur sleuths. The success of that telefilm resulted in a 1973-74 series, also called The Snoop Sisters, which was part of The NBC Wednesday Mystery Movie. For her performance, Natwick won the Primetime Emmy Award for Outstanding Lead Actress in a Miniseries or a Movie. In 1981, Natwick joined Hayes as the first members of the Board of Advisors to the Riverside Shakespeare Company. Both attended and supported several fund raisers for that off-Broadway theatre company.

She guest-starred on such television series as McMillan & Wife, Family, Alice, The Love Boat, Hawaii Five-O, The Bob Newhart Show, and Murder, She Wrote. She made her final film appearance at the age of 83 in the 1988 historical drama Dangerous Liaisons.

On October 25, 1994, Natwick died of cancer at her home in Manhattan at the age of 89. She is interred at Lorraine Park Cemetery in Baltimore.