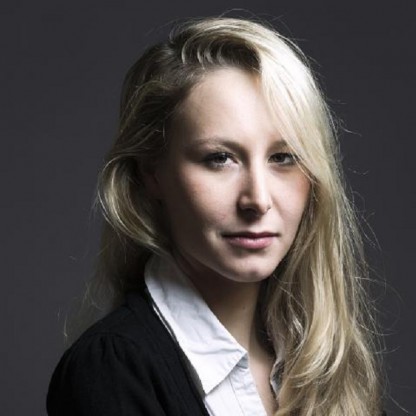 Marion Maréchal-Le Pen was born on December 10, 1989 in Saint-Germain-en-Laye, French, is Politician. Marion Jeanne Caroline Maréchal-Le Pen is a French politician who served as an MP for Vaucluse's 3rd constituency from 2012 to 2017. A granddaughter of Front National (FN) party founder Jean-Marie Le Pen, and niece of presidential contender Marine Le Pen, she became a member of FN at the age of 22—France's youngest MP in modern political history—and quickly became the face of FN. Marechal-Le Pen, a hard-line politician seen more as a political firebrand than her aunt, had made efforts to attract a broader range of voters with focus on social policies. Marechal-Le Pen clashed with her aunt Le Pen on issues like the euro, abortion rights, and economic protectionism. Le Pen had also stated that if she had won the presidential elections, she would not have given Marechal-Le Pen a position in her government, as she was "too young." Marechal-Le Pen was considered to be a leader of the traditionalist and Catholic party faction. She defended the French culture—their Christian roots, Latin roots and Greek roots. She was extremely popular in the country's southeast, and among the young voters. Stephen K. Bannon, US President Trump's chief strategist, had described her a “rising star.” Although she was seen as a future leader of the FN, she quit politics in May 2017, and refused to renew her mandate as a deputy or a regional councilor of Provence-Alpes-Côte d’Azur. She also expressed her desire to gain experience in business.
Marion Maréchal-Le Pen is a member of Political Leaders 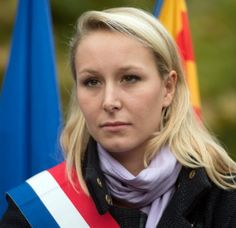 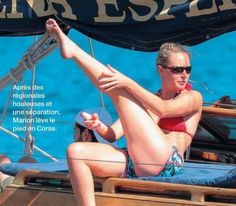 Her grandfather, Jean-Marie Le Pen, founded the Front National party on 5 October 1972. Her aunt Marine Le Pen has been FN President since 16 January 2011, with Jean-Marie Le Pen first becoming honorary chairman and later excluded in August 2015. Her mother Yann Le Pen, Jean-Marie Le Pen's second daughter, does not carry out any official duties within the FN. Her father Samuel Maréchal had been the leader of the Front National Youth movement (FNJ) for seven years (1992–1999). She featured with her grandfather in a campaign poster at the age of two.

She was born on 10 December 1989 in Saint-Germain-en-Laye, Yvelines, Île-de-France.

She was a candidate in seventh position on the FN list in Saint-Cloud, Hauts-de-Seine, in the 2008 municipal elections. She was not elected, for the FN list only got 6.29% with one municipal councillor elected from the first round.

In the 2010 regional elections, she figured in second position on the FN departmental list in the Yvelines, Île-de-France. Marie-Christine Arnautu's FN list, which polled 9.29% in the whole of Île-de-France in the first round, could not take part in the run-off, given that a list must cross a threshold of 10% of the valid votes at a regional level. Because of the process of elimination, she was not elected in the Île-de-France's regional council.

One of the six youngest members of the new Assembly, Maréchal-Le Pen served on 26 June 2012 as a secretary during the opening of the fourteenth legislature presided over by the most senior member François Scellier.

In the first round on 23 March 2014, the FN list led by Gérard Gérent, which was defeated by the one of the UMP incumbent mayor Thierry Lagneau, came second with 33.80% (2,861 votes) with the election of five municipal councillors and two community councillors. Consequently, she was not elected as a municipal councillor at Sorgues.

In April 2015, because of his intense anti-FN campaign in the departmental elections, Maréchal-Le Pen criticized the "cretinous contempt" ("mépris crétin") of Socialist Prime Minister Manuel Valls in parliament. Valls responded with a trembling hand and an apparent fury. After it had become a viral video, Maréchal-Le Pen explained it was a reference to Michel Onfray, who has also called Valls a "crétin" when the Prime Minister has accused him of "losing his landmarks".

After retiring from politics in 2017, Marion Marechal-Le Pen enrolled in a Master of Business Administration (MBA) at EMLYON Business School.

Maréchal-Le Pen believes that Muslims can only be French if they follow the Christianity-shaped culture, saying that "In our country, we don’t wear djellaba clothing, we don’t wear a veil and we don’t impose cathedral-sized mosques".