Steve King was born on May 28, 1949 in torm Lake, Iowa, United States, United States, is United States Representative. Steven Arnold “Steve” King is a Congressman who has been serving as the U.S. Representative for Iowa’s 4th congressional district since 2003. He was a businessman before he entered the world of politics and had built an earth moving company, King Construction, starting with just one bulldozer. He was a very hardworking man with astute business acumen which enabled him to build a highly successful business. Because of the nature of his business he was closely involved with the Iowa Land Improvement Contractors' Association and was disillusioned with the way government officials behaved whenever he had to interact with them on business issues. This kindled in him an interest in public policy and governance. He forayed into politics and served in the Iowa Senate for six years and was also a member of the Appropriations Committee, Judiciary Committee and the Commerce Committee. His experience as a businessman proved to be very beneficial in his political career as he could review policies from the perspective of not just a politician, but also from the angle of the common man. The outspoken politician is a social conservative and a strong pro-life advocate who believes in the sanctity of the life of the unborn. He is also a frequent contributor to several newspapers, magazines and radio.
Steve King is a member of Political Leaders 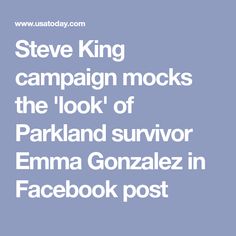 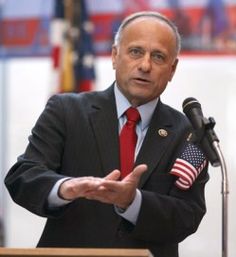 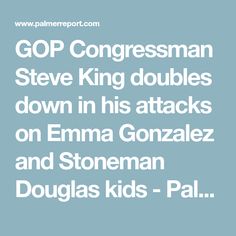 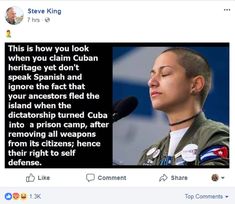 I don't want to disparage anyone because of their race, their ethnicity, their name—whatever their religion their father might have been, I'll just say this: When you think about the optics of a Barack Obama potentially getting elected President of the United States – I mean, what does this look like to the rest of the world? What does it look like to the world of Islam? I will tell you that, if he is elected president, then the radical Islamists, the al-Qaida, the radical Islamists and their supporters, will be dancing in the streets in greater numbers than they did on September 11.

King was born on May 28, 1949, in Storm Lake, Iowa, the son of Mildred Lila (née Culler), a homemaker, and Emmett A. King, a state police dispatcher. His father has Irish and German ancestry, and his mother has Welsh roots, as well as American ancestry going back to the colonial era. King graduated in 1967 from Denison Community High School. He is married to Marilyn, with whom he has three children. Raised a Methodist, King attended his wife's Catholic church, converting 17 years after marrying her. His son Jeff King (consultant) has been active in his political campaigns.

King attended North West Missouri State University from 1967 to 1970, and was a member of the Alpha Kappa Lambda fraternity, majoring in math and biology, but did not graduate. While in college, King received "2S" deferments in 1967, 1968 and 1969.

In 1975, he founded King Construction, an earth-moving company. King founded the Kiron Business Association in the 1980s. His involvement with the Iowa Land Improvement Contractors' Association led to regional and national offices in that organization and a growing interest in public policy.

From 1996 to 2002, King served as an Iowa state senator, representing the 6th district. He assisted in eliminating the inheritance tax, authored and passed into law workplace drug testing, worked for strengthening parental rights, passing tax cuts for working residents of Iowa, and passing a law that made English the official language in Iowa. In May 2001, King visited Cuba.

King is considered an outspoken fiscal and social conservative. After winning the 2002 Republican nomination, he said that he intended to use his seat in Congress to "move the political center of gravity in Congress to the right."

In April 2006, conservative members of Congress proposed strengthening law enforcement against illegal immigration to the United States. When asked if "the US economy simply couldn't function without" the presence of illegal immigrants, King said that he rejected that position "categorically". He said the 77.5 million people between the ages of sixteen and sixty-five in the United States who are not part of the workforce "could be put to work and we could invent machines to replace the rest."

On March 7, 2008, during his press engagements to announce his reelection campaign, King made remarks about then U.S. senator and Democratic presidential candidate Barack Obama and his middle name "Hussein", saying:

In mid-January 2009, King acknowledged that terrorists were not dancing in the streets, and in fact "They have made statements against Obama." But he also claimed that he found Obama's decision to use his middle name "Hussein" when he was to be sworn in as the 44th President of the United States on January 20, 2009, to be "bizarre" and "a double-standard".

King said on a radio show on June 14, 2010, that President Barack Obama's policies favored black people. On G. Gordon Liddy's radio program, He said, "The President has demonstrated that he has a default mechanism in him that breaks down the side of race—on the side that favors the black person in the case of Prof. Gates and officer Crowley."

During the 110th Congress, King voted with the majority of the Republican Party 90.9% of the time. King has continuously voted for Iraq War legislation, and has supported surge efforts and opposed a time table for troop withdrawals. During the 112th United States Congress King was one of 40 "staunch" members of the Republican Study Committee who frequently voted against Republican party leadership and vocally expressed displeasure with House bills.

In July 2012, King introduced an amendment to the House Farm Bill that would legalize previously banned animal agriculture practices such as tail-docking, putting arsenic in chicken feed, and keeping impregnated pigs in small crates. "My language wipes out everything they’ve done with pork and veal," King said of his amendment. The Humane Society of the United States (HSUS) President Wayne Pacelle said the measure could nullify "any laws to protect animals, and perhaps ... laws to protect the environment, workers, or public safety."

In July 2013, speaking about proposed immigration legislation, King said of undocumented immigrants, "For every one who's a valedictorian, there's another 100 out there who weigh 130 pounds—and they've got calves the size of cantaloupes because they're hauling 75 pounds of marijuana across the desert." Despite strong rebukes from Democrats and King's fellow Republicans alike, with blunt rebukes from House speaker John Boehner, who called his statements "ignorant" and "hateful" and House majority leader Eric Cantor, who called the comments "inexcusable"; King continued to defend his comments, asserting he got the description from the border patrol.

On October 7, 2014, King was one of 19 members of Congress inducted into the LGBT civil rights advocacy group Human Rights Campaign's "Hall of Shame" for his opposition to LGBT equality.

Referencing HUD secretary Julian Castro's remarks on how poorly the Republican Party was doing with Hispanic voters, King responded in a July 2015 tweet "What does Julian Castro know? Does he know that I'm as Hispanic and Latino as he?" King is neither Hispanic nor Latino by either family history or ethnic definition.

King strongly endorsed Ted Cruz during the 2016 Republican primaries for President of the United States.

King voted in favor of the Tax Cuts and Jobs Act of 2017. He calls it a "welcome gift" and says that Iowa will benefit from job and income growth.

King opposes affirmative action. King has stated: “There’s been legislation that’s been brought through this House that sets aside benefits for women and minorities. The only people that it excludes are white men...Pretty soon, white men are going to notice they are the ones being excluded.”