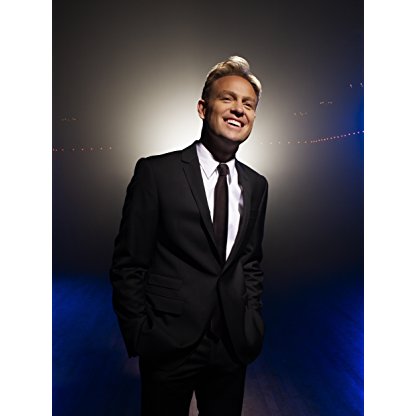 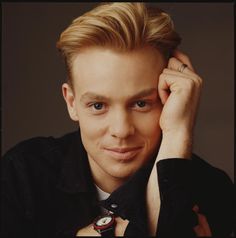 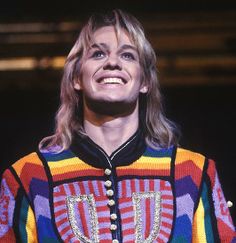 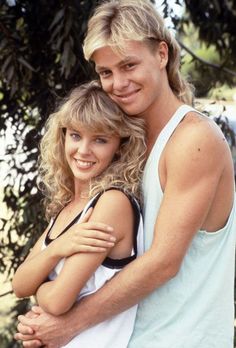 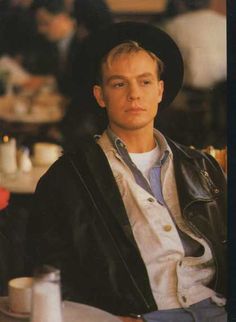 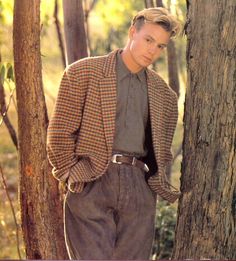 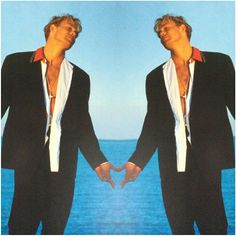 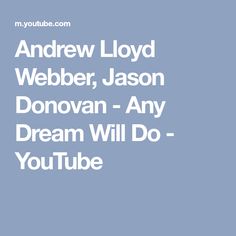 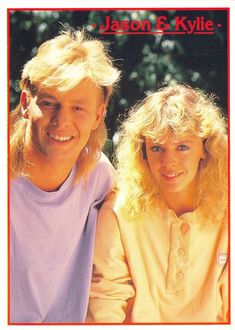 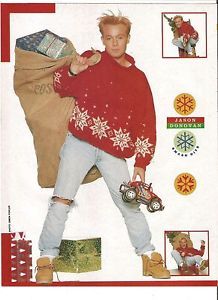 Jason Donovan was born in Malvern, Victoria, and is the son of Australian Sue McIntosh and British-born veteran stage and television actor Terence Donovan (who also appeared in Neighbours) who has English and Irish heritage. Following his parents' separation and divorce, his father was awarded full custody of him in 1972 and brought him up on his own. Donovan has had no contact with his mother since the divorce. His half-sister is former Neighbours star Stephanie McIntosh. He attended De La Salle College Malvern.

Donovan made his first television appearance at age 11 in a guest role on the Australian series Skyways in 1980. In the episode, his on-screen sister was played by Future Neighbours co-star Kylie Minogue. He also appeared in the series I Can Jump Puddles (1981) and Golden Pennies (1985) before entering the cast of Neighbours in 1986 as Scott Robinson (replacing actor Darius Perkins, who had played the role for the first year of the series). His character's story arcs included an onscreen romance and wedding to Charlene Mitchell (played by Minogue), and helped boost the show's popularity with British as well as Australian audiences.

He won his first Logie Award for "Best New Talent" in 1987 and received a commendation in the category "Performance by a Male Actor In a Series" from the Television Society of Australia's Penguin Awards. In 1988 he was awarded the Silver Logie for the "Most Popular Actor" on Australian television.

In December 1989, he took part in Band Aid II's version of "Do They Know it's Christmas", which also included Minogue, whose exit from Neighbours had by now been shown on screen in both Australia and the UK. His own exit from the show had by this stage been shown on Australian television, although it was not aired on British television until several months later.

Donovan continued to act alongside his pop career, and in 1990 he appeared in his first feature film, Blood Oath (released in some countries as Prisoners of the Sun).

In 1991, Donovan accepted the lead role in the restaged London Palladium version of Joseph and the Amazing Technicolor Dreamcoat, directed by Steven Pimlott. Donovan had his third solo UK No. 1 single with one of its songs, "Any Dream Will Do". Donovan left the production in early 1992.

In 1992, Donovan launched a libel action against The Face magazine which had published allegations that he was homosexual. Donovan won £200,000 in damages and the magazine had to pay a further £100,000 in costs, but the lawsuit created a backlash with people accusing him of being homophobic. Although he had been a mild drug user who had smoked cannabis joints up until this point, in the months after his libel action Donovan began using cocaine. In a 2007 interview in the magazine Marie Claire and also in his 2007 autobiography Between The Lines: My Story Uncut, Donovan stated that suing The Face was the biggest mistake of his life.

Donovan moved to Polydor Records and released his third album, All Around The World (1993).

Later in 1995, Donovan starred in the Australian TV film The Last Bullet with Koji Tamaki, directed by Michael Pattison, which was set in World War II on the Pacific island of Borneo.

In 1998, Donovan took the lead role of Dr. Frank N. Furter in the UK touring production of The Rocky Horror Show, where he met stage manager Angela Malloch. After the pair had a brief relationship, Malloch became pregnant and gave Donovan an ultimatum that he had to kick drugs once and for all if he wanted to be part of their child's life.

In late 1999, Donovan stated that he still used cocaine, saying: "I still have a joint and I still take coke, but not as much as I did two years ago."

Donovan's daughter Jemma was born in March 2000. Since then, with his drug problems now under control, he continued to act on stage and television, and had a role in the medical-legal television drama MDA (2003–05), on Australia's ABC network. Since 2003, Donovan has also lent his voice to the Buzz! series of quiz video games.

In 2005, Donovan's mobile phone number was circulated around the web in Australia, due to an image that was taken in Sydney. It appeared that Donovan was trying to sell his car, and unwittingly released his mobile phone number to the public. From 10 September, his answering machine had a special message on it, because he was frustrated by the number of calls he was receiving for no particular reason. Virgin placed advertisements in several high-profile Australian newspapers, urging people not to call Donovan, one of their customers. Virgin Mobile has since admitted the photos were all part of a marketing ploy. Virgin also ran TV advertisements showing Donovan answering prank calls, asking the viewer not to call him, then displaying his number.

Donovan took part in I'm a Celebrity... Get Me Out of Here! in 2006 and finished in 3rd place. While in the jungle, he became good friends with David Gest and Matt Willis. Donovan also took part in many Bushtucker Trials, which included wearing a helmet full of insects and playing a giant game of Operation. Donovan lost out on the King of the Jungle Crown to Matt Willis. However, during an interview on The Steve Wright Show on BBC Radio 2 (January 2008), he claimed that his appearance on I'm A Celebrity... had revitalised his career.

Donovan performed a medley of songs from Joseph along with other actors who have played the eponymous role (Donny Osmond and Lee Mead) at the Concert for Diana in July 2007.

Also in 2008, Donovan performed at the Party In The Park in Wellingborough, Northamptonshire.

In 2009, Donovan performed as Tick (Mitzi) in the London stage musical production of Priscilla Queen of the Desert at the Palace Theatre. Also in 2009, Donovan began appearing in television commercials (with Kerry Katona and Coleen Nolan) for the frozen food supermarket chain Iceland in the UK.

In September 2010, Donovan took part in the BBC television series Who Do You Think You Are?, tracing his family tree back several generations. Donovan's fifth studio album, Soundtrack Of The 80s, was released in October 2010. The album is composed of cover versions of well known 1980s hits such as "Drive" (The Cars), "I Just Died In Your Arms" (Cutting Crew) and "Sign Your Name" (Terence Trent D'Arby) and several others. The same year, Donovan played the role of The Artilleryman in the 2010–2011 stage show Jeff Wayne's Musical Version of The War of the Worlds. The show toured the UK and Europe, starting in November 2010 and finished in Germany in January 2011. Donovan also voiced the part of Toby the Kangaroo in the environmental animated film Animals United.

In February 2011, Donovan appeared on the BBC series Ready, Steady, Cook. Later in 2011, he performed on the Here and Now Tour, and also toured in a production of The Sound of Music playing Captain Von Trapp. The production co-starred Verity Rushworth as Maria. From September 2011, Donovan took part in the ninth series of the BBC's Strictly Come Dancing. He was partnered with Dancer Kristina Rihanoff and finished third in the competition. Donovan presented a voice-tracked radio show on Heart each Sunday from 10 am to 12 noon. Donavon temporarily left the station in 2013

In March 2012, Donovan released a new album of covers, Sign Of Your Love, which peaked at number 36 in the UK Albums Chart. In May 2012, Donovan was interviewed by Piers Morgan on the ITV series Piers Morgan's Life Stories, in which he talked openly about his career, his past and ex relationship with Kylie Minogue, and his battle with drugs. During the interview, Donovan also admitted that he'd undergone hair transplantation to counteract his thinning hair. In Summer 2012, he appeared as a judge on ITV's talent search show Superstar. In late 2012, Donovan again toured the UK and Europe in a new version of Jeff Wayne's War of the Worlds, this time playing Parson Nathaniel.

In 2013, Donovan reprised his role as Tick/Mitzi in the UK national touring production of Priscilla, Queen of the Desert. On 5 May 2013, Donovan was heard narrating Pick TV's budget version of Rude Tube, entitled Video Surf. Donovan revealed in January 2015 that he was invited to return to Neighbours for the show's 30th anniversary celebrations, but he declined the offer, adding "it's just not something I want to do". However, he agreed to take part in the documentary special Neighbours 30th: The Stars Reunite, which aired in Australia and the UK in March 2015.

In 2016, Jason Donovan toured the UK with his Ten Good Reasons and Greatest Hits Tour.

In 2017, Heart 80's Radio was launched and Jason began presenting Sunday Mornings from 9 am to 12 noon in addition to his 80's Rewind Sunday Evening Show on Heart. In December 2017 it was announced that in the new year Donovan would be taking his second break from his radio shows. He has confirmed he will be returning to Heart at some point in the Future.