Hatshepsut was born on 1507 in Egypt, Egyptian, is Pharaoh. Hatshepsut is one of the ancient rulers of Egypt and holds the reputation of being the first female Pharaoh of the nation. However, she tried keeping the kingdom's tradition alive by sporting the look of a man, thus making her countrymen feel that the kingdom is still being governed by a male. Having ruled for a little more than twenty years, she introduced a lot of significant changes during her administration which paved the way for great economic development. One such important move was the improvement of connectivity amongst different places, which led to an increase in trade. Hatshepsut is also known for having initiated the construction activities of many statues and monuments, which led to the creation of phenomenal pieces of architecture over the years. The pharaoh publicized her administration by getting her images inscribed on the walls of buildings, which was quite unusual for her time. Although few sources claim that her foreign policy believed in maintaining cordial relations with nations, a few others believed that she carried out military operations to invade neighboring kingdoms like Syria. The reign of this female Pharaoh is one of the best examples to prove that a woman's leadership abilities can sometimes even surpass a male. To know more about her life and works read on
Hatshepsut is a member of Leaders 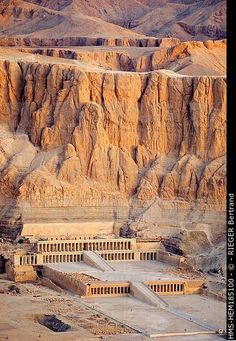 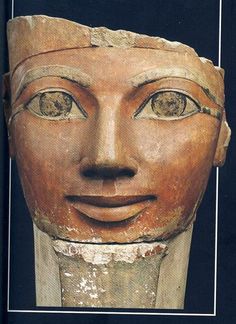 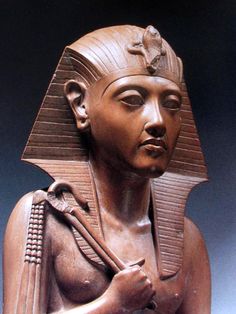 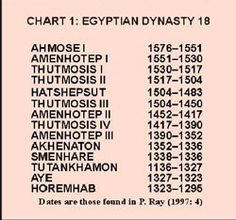 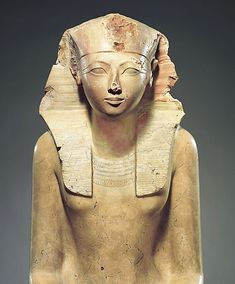 Welcome my sweet daughter, my favorite, the King of Upper and Lower Egypt, Maatkare, Hatshepsut. Thou art the Pharaoh, taking possession of the Two Lands.

Hatshepsut (/hætˈʃɛpsʊt/; also Hatchepsut; Egyptian: ḥ3.t-šps.wt "Foremost of Noble Ladies"; 1507–1458 BC) was the fifth pharaoh of the Eighteenth Dynasty of Egypt. She was the second historically confirmed female pharaoh, the first being Sobekneferu. (Various other women may have also ruled as pharaohs regnant or at least regents before Hatshepsut, as early as Neithhotep around 1,600 years prior.) Hatshepsut came to the throne of Egypt in 1478 BC. Officially, she ruled jointly with Thutmose III, who had ascended to the throne the previous year as a child of about two years old. Hatshepsut was the chief wife of Thutmose II, Thutmose III’s father. She is generally regarded by Egyptologists as one of the most successful pharaohs, reigning longer than any other woman of an indigenous Egyptian dynasty. According to Egyptologist James Henry Breasted she is also known as "the first great woman in history of whom we are informed."

Dating the beginning of her reign is more difficult, however. Her father's reign began in either 1526 or 1506 BC according to the high and low estimates of her reign, respectively. The length of the reigns of Tuthmosis I and Tuthmosis II, however, cannot be determined with absolute certainty. With short reigns, Hatshepsut would have ascended the throne 14 years after the coronation of Tuthmosis I, her father. Longer reigns would put her ascension 25 years after Tuthmosis I's coronation. Thus, Hatshepsut could have assumed power as early as 1512 BC, or, as late as 1479 BC.

In 1903, Howard Carter had discovered a tomb (KV60) in the Valley of the Kings that contained two female mummies, one identified as Hatshepsut's wetnurse, and the other unidentified. In the spring of 2007, the unidentified body was finally removed from the tomb by Dr. Zahi Hawass and brought to Cairo's Egyptian Museum for testing. This mummy was missing a tooth, and the space in the jaw perfectly matched Hatshepsut's existing molar, found in the DB320 "canopic box". Her death has since been attributed to a carcinogenic skin lotion found in possession of the Pharaoh, which led to her having bone cancer. "There is a lot that speaks for this hypothesis," according to Helmut Wiedenfeld of the University of Bonn's pharmaceutical institute. "If you imagine that the queen had a chronic skin disease and that she found short-term improvement from the salve, she may have exposed herself to a great risk over the years."

Hatshepsut was described as having a reign of about 21 years by ancient authors. Josephus and Julius Africanus both quote Manetho's king list, mentioning a woman called Amessis or Amensis who has been identified (from the context) as Hatshepsut. In Josephus' work, her reign is described as lasting 21 years and nine months, while Africanus stated it was twenty-two years. At this point in the histories, records of the reign of Hatshepsut end, since the first major foreign campaign of Thutmose III was dated to his 22nd year, which also would have been Hatshepsut's 22nd year as pharaoh.

The 2006 discovery of a foundation deposit including nine golden cartouches bearing the names of both Hatshepsut and Thutmose III in Karnak may shed additional light on the eventual attempt by Thutmose III and his son Amenhotep II to erase Hatshepsut from the historical record and the correct nature of their relationships and her role as pharaoh.

Presuming that it was Thutmose III (rather than his co-regent son), Tyldesley also put forth a hypothesis about Thutmose suggesting that his erasures and defacement of Hatshepsut's monuments could have been a cold, but rational attempt on his part to extinguish the memory of an "unconventional female king whose reign might possibly be interpreted by Future generations as a grave offence against Ma'at, and whose unorthodox coregency" could "cast serious doubt upon the legitimacy of his own right to rule. Hatshepsut's crime need not be anything more than the fact that she was a woman." Tyldesley conjectured that Thutmose III may have considered the possibility that the Example of a successful female king in Egyptian history could demonstrate that a woman was as capable at governing Egypt as a traditional male king, which could persuade "future generations of potentially strong female kings" to not "remain content with their traditional lot as wife, sister and eventual mother of a king" and assume the crown. Dismissing relatively recent history known to Thutmose III of another woman who was king, Sobekneferu of Egypt's Middle Kingdom, she conjectured further that he might have thought that while she had enjoyed a short, approximately four-year reign, she ruled "at the very end of a fading [12th dynasty] Dynasty, and from the very start of her reign the odds had been stacked against her. She was, therefore, acceptable to conservative Egyptians as a patriotic 'Warrior Queen' who had failed" to rejuvenate Egypt's fortunes. In contrast, Hatshepsut's glorious reign was a completely different case: she demonstrated that women were as capable as men of ruling the two lands since she successfully presided over a prosperous Egypt for more than two decades. If Thutmose III's intent was to forestall the possibility of a woman assuming the throne, as proposed by Tyldesley, it was a failure since Twosret and Neferneferuaten (possibly), a female co-regent or successor of Akhenaten, assumed the throne for short reigns as pharaoh later in the New Kingdom.

The erasure of Hatshepsut's name—whatever the reason or the person ordering it—almost caused her to disappear from Egypt's archaeological and written records. When nineteenth-century Egyptologists started to interpret the texts on the Deir el-Bahri temple walls (which were illustrated with two seemingly male kings) their translations made no sense. Jean-François Champollion, the French decoder of hieroglyphs, was not alone in feeling confused by the obvious conflict between words and pictures:

She later ordered the construction of two more obelisks to celebrate her 16th year as pharaoh; one of the obelisks broke during construction and a third was therefore constructed to replace it. The broken obelisk was left at its quarrying site in Aswan, where it still remains. Known as The Unfinished Obelisk, it demonstrates how obelisks were quarried.

The "Hatshepsut Problem" was a major issue in late 19th century and early 20th century Egyptology, centering on confusion and disagreement on the order of succession of early 18th dynasty pharaohs. The dilemma takes its name from confusion over the chronology of the rule of Queen Hatshepsut and Thutmose I, II, and III. In its day, the Problem was controversial enough to cause academic feuds between leading Egyptologists and created perceptions about the early Thutmosid family that persisted well into the 20th century, the influence of which still can be found in more recent works. Chronology-wise, the Hatshepsut Problem was largely cleared up in the late 20th century, as more information about her and her reign was uncovered.