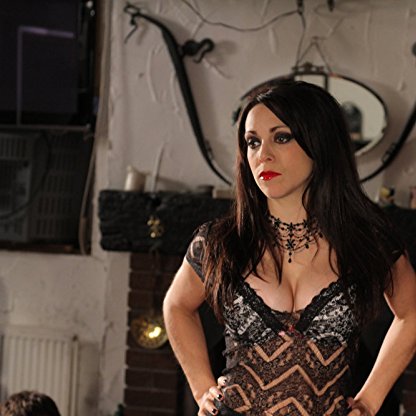 Booth was born in Chester, Cheshire in 1976 but grew up in Hastings, East Sussex. Her paternal great-grandfather built one of the first cinemas in the UK in Cornwall. It is now a garage, but still has a plaque on the wall marking its significance. Booth studied for 3 A levels and a BA in media and film degree at Goldsmiths College, University of London. While she was a student she earned money busking in the street playing the violin and sang on Eurotrash. Booth once worked in PR for the London-based Salvation Films, has been an avid animal rights campaigner and has some rats as pets.

Booth is a presenter on Eat Cinema, interviewing A-list Hollywood stars on The Buzz and hosting her own show First Night Bites. She also hosted the now defunct Quiz Night Live, a premium rate call-in quiz show, shown on satellite/Freeview channel Ftn. She presents The Match on the XLeague.tvchannel. In 2007, she joined Zone Horror where she works as a presenter and continuity announcer. In 2007, Booth became the face of the Horror Channel, and hosted a monthly highlights show, Horror Bites.

Booth was among the guests at the 2009 Festival of Fantastic Films in Manchester and announced the results of the Delta Film Award. She co-hosted the Frighten Brighton Classic Horror Film Festival in Brighton in August 2012.