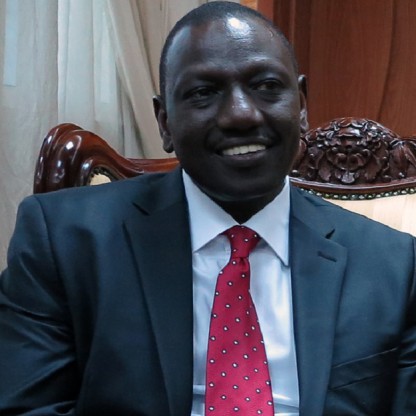 William Ruto was born on December 21, 1966 in Uasin Gishu County, Kenyan, is Deputy President of Kenya. William Ruto had always been a brilliant student and continues to remain one even today. He has been actively involved in Kenyan Politics and is the first Deputy President of the Republic of Kenya, a position which is equivalent to that of a vice-president. He has also worked as a teacher before joining politics and apparently, the politician was great at his job and earned a lot of respect in that profession. Ruto entered the realm of politics when he started campaigning for the presidential candidate of ‘KANU’, Daniel arap Moi. This campaign was not just a great success, but it also proved this leader’s political skills. Ruto’s leadership qualities helped him get elected to various positions in the government. He has faced many obstacles during his political career and has been accused of many wrong doings. There are a number of criminal cases on him which are still pending at the International Criminal Court (ICC). However, this has not decreased his popularity among the masses and they have always supported him. He has worked in the committee responsible for reforms in the constitution. Presently, he is not engaged with any ministry and is continuing his tenure as the Deputy President of Kenya. To know more about this leader, his works and achievements, read on.
William Ruto is a member of Political Leaders

Ruto was born 21 December 1966 in Sambut village, Kamagut, Uasin Gishu to Daniel Cheruiyot and Sarah Cheruiyot. He attended Kerotet Primary School for his primary school education then joined Wareng Secondary School for his Ordinary Levels education before proceeding to Kapsabet Boys, Nandi for his Advanced Levels. He then went on to receive a BSc (Botany and Zoology) from the University of Nairobi, graduating in 1990. He was also a member of Christian Union where he served as Chairman. He was ranked the best student in his class. He later enrolled for MSc in Environmental Science, graduating in 2011. He is currently pursuing a PhD from the same University.

Ruto married Rachel Chebet in 1991; they have got six children.In February 2017 Prisca Chemutai Bett claimed that Ruto had fathered her 11-year-old daughter Abby Cherop Ruto, a claim that Ruto accepted.

Ruto was Organising Secretary of Youth for Kanu '92 (YK92), a group that was formed to drum up support for President Daniel arap Moi in the 1992 election.

In January 2006, Ruto declared publicly that he would stand for the presidency in the next general election, scheduled for December 2007. His statement was condemned by some of his KANU colleagues, including former President Moi. Ruto sought the nomination of the Orange Democratic Movement (ODM) as its presidential candidate, but in the party's vote on 1 September 2007, he placed third with 368 votes, behind the winner, Raila Odinga (with 2,656 votes) and Musalia Mudavadi (with 391). Ruto expressed his support for Odinga after the vote. He resigned from his post as KANU secretary general on 6 October 2007.

The Waki Commission report stated in 2009 that "the incident which captured the attention of both Kenyans and the world was the deliberate burning alive of mostly Kikuyu women and children huddled together in a church" in Kiambaa on 1 January 2008.

In early 2009 after parliamentary debate on a maize scandal, Ruto was accused of illegally selling maize by Ikolomani MP Bonny Khalwale. Fake documents bearing the National Cereals and Produce Board seal that linked Mr Ruto to the illegal sale of maize were rejected by Parliament’s deputy speaker.

On 21 April 2010, Ruto was transferred from the agriculture ministry and posted to the higher education ministry, swapping posts with Sally Kosgei. On 24 August 2011, william Ruto was relieved of his ministerial duties, and remaining a member of parliament. He joined hands with Uhuru Kenyatta to form the Jubilee alliance for the 2013 presidential election.

In December 2010, the prosecutor of the International Criminal Court announced that he was seeking summonses of six people, including Ruto over their involvement in the 2007-8 electoral violence. The ICC's Pre-Trial Chamber subsequently issued a summons for Ruto at the prosecutor's request. Ruto is accused of planning and organising crimes against supporters of President Kibaki's Party of National Unity. He is charged with three counts of crimes against humanity, one of each of murder, forcible transfer of population and persecution. On 23 January 2012, the ICC confirmed the charges against Ruto and Joshua Sang, in a case that also involved Uhuru Kenyatta, Francis Muthaura, Henry Kosgey and Major General Mohammed Hussein Ali.

On 4 March 2013, he was elected as Deputy President alongside President Uhuru Kenyatta. They won on a Jubilee Coalition ticket.

On 6 October 2014 Ruto was appointed acting President of Kenya by President Uhuru Kenyatta following his summons to appear before the ICC.

In early 2015, william Ruto was accused of illegally acquiring land belonging to Lang'ata Road Primary School to pave way for a car parking lot for a hotel allegedly belonging to him. The incident, which was widely reported around the world, showed pictures of hapless pupils being teargassed. Ruto denied his involvement in the land saga but later admitted that he owned the hotel that had allegedly grabbed the school's playground. So wide was the outrage against the treatment of children at Lang'ata Road Primary School that the Cabinet Secretary in charge of Land in Kenya gave a statement that said the hotel that had grabbed the school land belonged to some Singh brothers. At a press conference in her office, Mrs Ngilu named Nairobi businessmen Mandip Singh Amrit, Manjit Singh Amrit, Harbans Singh Amrit and Kamal Prakash Amrit as the owners of the company linked to the controversial acquisition of Lang’ata Road Primary School land.

In April 2016, the prosecution of Ruto was abandoned by the International Criminal Court.

On 28 July 2017, Ruto's home in Sugoi village near Eldoret was targeted by at least one attacker armed with machete and a police officer guarding the residence was injured during the attack. During the time of the attack, he and his family were not at the compound as he had left hours earlier for a campaign rally in Kitale. There were also reports of gunfire and several security sources said the attack was staged by multiple people using guns. Police also thought there are a few attackers initially because the attacker used different firearms.. Several hours later on 30 July, Kenya Police chief Joseph Boinnet announced that the attacker was shot dead and the situation was under control.