Victoria Dawn Justice was born on February 19, 1993 in Hollywood, Florida, United States, United States, is Actress, singer. Victoria Justice is an American actress and is known for her roles in several TV series. She appeared in the Nickelodeon series ‘Zoey 101’, ‘Victorious’, ‘The Naked Brothers Band’ and ‘The Penguins of Madagascar.’ She has since been seen in a number of theatrical releases like ‘Unknown’ and ‘The Garden.’ Victoria also has a successful musical career. She recored several songs for the series ‘Victorious’ and the Nickelodeon musical ‘Spectacular.’ She has also released several singles like ‘Almost Paradise’ and ‘Don’t Dream It’. According to Victoria herself, she is not at all interested in singing typical pop songs which she considers boring. She wants to sing something that is deeply meaningful to her.
Victoria Dawn Justice is a member of Social Media Stars 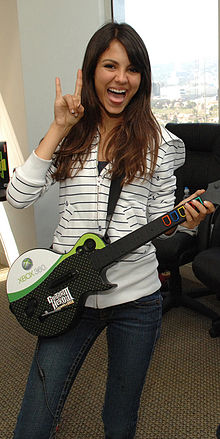 Victoria Dawn Justice was born on February 19, 1993 in Hollywood, Florida, the daughter of Serene Reed and Zack Justice. Her father is of English, German, and Irish descent, while her mother, originally from the Bronx has Puerto Rican ancestry.

In 2003, Justice began her acting career when she was 10 years old, making a guest appearance on the Gilmore Girls episode "The Hobbit, the Sofa and Digger Stiles." Justice portrayed Jill No. 2, a walk-on role. After her appearance in the series, her family moved to Los Angeles, when Justice began to pursue a career in acting.

During the same year, Justice landed a main role in the Nickelodeon series Zoey 101 as Lola Martinez, a new student who is an aspiring Actress. On landing the role, she said, "I was extremely happy; I was bouncing up and down and screaming. That was a really great moment." Justice's character was introduced in the second season on September 11, 2005. Justice also made a cameo appearance in the R-rated film When Do We Eat?, and played the role of Rose in the Hallmark television film Silver Bells, the latter of which became a Hallmark Hall of Fame film.

In 2006, Justice made a guest appearance on an episode of Everwood in the episode "Enjoy the Ride." Justice made her theatrical film debut that year in the film Unknown, making a cameo appearance.The film was a financial failure, and received mixed reviews from critics. Also in 2006, Justice played the supporting role of Holly in the thriller film The Garden. The film was met with negative reviews from critics.

Justice released a cover of "A Thousand Miles" by Vanessa Carlton in 2007. Zoey 101 ended its run on May 2, 2008. In 2009, she announced plans to guest star on an episode of Nickelodeon's series The Naked Brothers Band. The TV special, titled Valentine Dream Date featured Justice portraying herself. Justice did not record new music until 2009, when she starred in the Nickelodeon musical Spectacular!, in which Justice performs three songs. The film aired on Nickelodeon on February 16, 2009. The film became one of Nickelodeon's most popular movies, attracting an audience 3.7 million viewers on its premiere night. The film received generally positive reviews from several critics, holding a 76% approval rating on Rotten Tomatoes as of 2011.

After the success of The Naked Brothers Band special in which Justice guest starred, she appeared in another episode, "The Premiere," on April 11, 2009. She later appeared in episodes of iCarly, True Jackson, VP, The Troop, and BrainSurge. Justice announced in 2009 that she would be working on a thriller film, set for theatrical release. It was later announced the film would feature Dylan Sprouse and Cole Sprouse. Unlike initial plans of a theatrical release, the film had a limited preview release on December 12, 2009, and was returned to post production. Despite this, the film's worldwide release was canceled.

On September 30, 2010, Justice announced she would be joining the Charity Campaign Girl Up. When asked about joining, she stated "I’m so excited to become a Champion for Girl Up and to help make a difference for girls who aren’t given the same opportunities that most of us take for granted. I know that there are plenty of girls throughout the country who are just like me—ready and motivated to stand up for the rights and well-being of girls in the developing world. I am confident that, together, we will rise to the challenge." Justice joined Girl Up on September 30, 2010 for the campaign’s official launch in New York City and went on to support the “Unite for Girls” tour, which traveled to cities across the United States. She visited Girl Up-supported programs in developing countries to observe first-hand the impact the programs can have on girls and communities. During an interview with Seventeen, Justice stated, "I was looking into different charities and hearing these girls in Guatemala and Africa talk about having to walk miles for water and crying because they don't have any money to go to school. It just really broke my heart, so I want to spread the word as much as I can and get other people working together. Before you know it we can actually make a difference."

Justice has also supported children's hospitals. In June 2012, the "Music Makes It Better" campaign was launched by Children's National Medical Center, featuring PSAs by Justice, Justin Bieber, and The Band Perry. The campaign aims to bring music, arts, and other programs to children while they are in the hospital.

On October 11, 2013, it was announced that Justice was cast as Lindy Sampson in MTV's Eye Candy, a cyber thriller based on the novel by R. L. Stine. The series was cancelled after one season. That same year, it was announced that Justice was cast in Naomi and Ely's No Kiss List alongside Pierson Fode. The film had its world premiere at the Outfest Film Festival on July 17, 2015. It was later released on September 18, 2015 through video on demand. Justice was also cast in The Outcasts as Jodie. The film was released on April 14, 2017.

On October 20, 2016, Justice played Janet Weiss, one of the lead roles in The Rocky Horror Picture Show: Let's Do the Time Warp Again. Starring an ensemble cast led by Laverne Cox, the film premiered on the Fox network. It is a tribute to the cult classic 1975 film of the same name and directed by Kenny Ortega, using the original script written by Richard O'Brien and Jim Sharman.