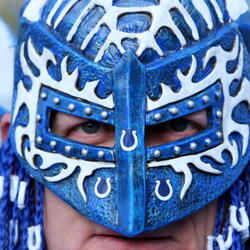 The Ultimate Warrior, also known as Brian James Hellwig, began bodybuilding while in elementary school. He won multiple amateur bodybuilding titles throughout his school years, ultimately winning the AAU Coastal competition in 1983 and Mr. Georgia in 1984. He met a group of bodybuilders in California in 1985 who were training to be wrestlers and shifted his focus. He first wrestled as part of the tag team, the Blade Runners in the Mid-South Wrestling league, which became known as the Universal Wrestling Federation. From there, he wrestled for a year with World Class Championship Wrestling. It was during this time that he began to be called "Warrior". From 1987-1991, he wrestled with the World Wrestling Federation. He won numerous titles during his time with the WWF. From 1992-1996, he went in and out of retirement, and then returned to fight for the WCW in 1998. He retired in 1998, but fought one match in 2008.

On April 5 2014, Ultimate Warrior was inducted into the WWE Hall of Fame Class. On April 6 he made a surprise appearance at Wrestlemania. On April 7 he appeared in a promo on WWE Raw. Unfortunately, less than 24 hours after this appearance on Raw, Ultimate Warrior collapsed while walking to a car from his hotel. He was officially pronounced dead on April 8, 2014. His final public appearance on television was seen by many viewers as being prophetic of his death, and serving as a kind of auto-eulogy for the legendary wrestler, including the lines "Every man's heart one day beats its final beat, his lungs breathe their final breath and if what that man did in his life makes the blood pulse through the body of others and makes them believe deeper in something larger than life, then his essence, his spirit will be immortalized."