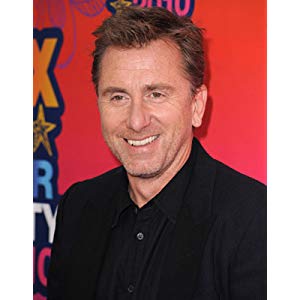 Often mistaken for an American because of his skill at imitating accents, actor Tim Roth was born Timothy Simon Roth on May 14, 1961 in Lambeth, London, England. His mother, Ann, was a teacher and landscape painter.
Tim Roth is a member of Actor

Often mistaken for an American because of his skill at imitating accents, actor Tim Roth was born Timothy Simon Roth on May 14, 1961 in Lambeth, London, England. His mother, Ann, was a teacher and landscape painter. His father, Ernie, was a journalist who had changed the family name from "Smith" to "Roth"; Ernie was born in Brooklyn, New York, to an immigrant family of Irish ancestry.

Tim grew up in Dulwich, a middle-class area in the south of London. He demonstrated his talent for picking up accents at an early age when he attended school in Brixton, where he faced persecution from classmates for his comfortable background and quickly perfected a cockney accent to blend in. He attended Camberwell Art College and studied sculpture before he dropped out and pursued acting.

The blonde actor's first big break was the British TV movie Made in Britain (1982). Roth made a huge splash in that film as a young skinhead named Trevor. He next worked with director Mike Leigh on Meantime (1983), which he has counted among his favorite projects. He debuted on the big screen when he filled in for Joe Strummer in the Stephen Frears neo-noir The Hit (1984). Roth gained more attention for his turn as Vincent Van Gogh in Vincent & Theo (1990) and his work opposite Gary Oldman in Rosencrantz & Guildenstern Are Dead (1990).

He moved to Los Angeles in search of work and caught the eye of young director Quentin Tarantino. Tarantino had envisioned Roth as a possible Mr. Blonde or Mr. Pink in his heist flick Nhung Ke Phan Boi (1992), but Roth campaigned for the role of Mr. Orange instead, and ultimately won the part. It proved to be a huge breakthrough for Roth, as audiences found it difficult to forget his performance as a member of a group of jewelry store robbers who is slowly bleeding to death. Tarantino cast Roth again in the landmark film Pulp Fiction (1994). Roth and actress Amanda Plummer played a pair of robbers who hold up a restaurant. 1995 saw the third of Roth's collaborations with Tarantino, a surprisingly slapstick performance in the anthology film Four Rooms (1995). That same year Roth picked up an Academy Award nomination for his campy turn as a villain in the period piece Rob Roy (1995).

Continuing to take on disparate roles, Roth did his own singing (with an American accent to boot) in the lightweight Woody Allen musical Everyone Says I Love You (1996). He starred opposite Tupac Shakur in Shakur's last film, the twisted comedy Gridlock'd (1997). The pair received positive critical notices for their comic chemistry. Standing in contrast to the criminals and baddies that crowd his CV, Roth's work as the innocent, seafaring pianist in the Giuseppe Tornatore film La leggenda del pianista sull'oceano (1998) became something of a fan favorite. Grittier fare followed when Roth made his directorial debut with The War Zone (1999), a frank, critically acclaimed drama about a family torn apart by incest. He made his next high-profile appearance as an actor as General Thade, an evil simian in the Tim Burton remake of Planet of the Apes (2001). Roth was, of course, all but unrecognizable in his primate make-up.

Roth has continued to enjoy a mix of art house and mainstream work, including everything from the lead role in Francis Ford Coppola's esoteric Youth Without Youth (2007) to becoming "The Abomination" in the special effects-heavy blockbuster The Incredible Hulk (2008). Roth took his first major American television role when he signed on to the Fox-TV series Doi Tra (2009)