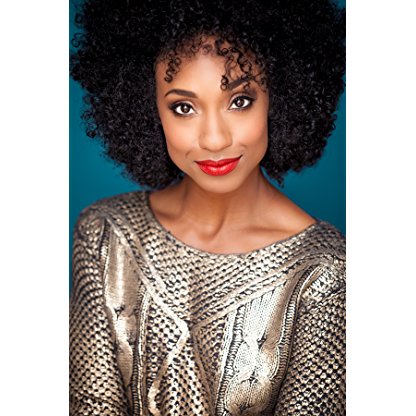 Tiffany Daniels was born on March 11, 1988, is Actress, Producer. Tiffany Daniels was born and raised in San Diego, CA. She is a graduate of the San Diego School of Creative and Performing Arts, and received a bachelor of science in Hotel and Restaurant Administration from Cornell University . Upon graduation Tiffany received a year long dance scholarship to Edge Performing Arts Center in Hollywood where she trained intensely in different areas of dance, voice, and improv. Tiffany has had the pleasure of dancing for the Los Angeles Chargers, the Los Angeles Lakers as well as hosting the live pre-game Lakers Television show. She has also worked commercially for Dell, Wal Mart, Cox Communications, KSwiss, Toyota, Diet Pepsi, Greyhound, LA Pride, Lifetime TV and Mike and Ikes. Tiffany has danced on CBS's "Coldcase", Nickelodeon's "The Fresh Beat Band", Fox's "Mobbed", Disney's "Shake it Up", Comedy Central's "Broad City", ABC's The Goldbergs and The American Music Awards, VH1's Divas Live & Nickelodeon's Kids Choice Awards. Tiffany's stage credits include a national tour of the musical Aida, "Squeak" in the 1st National Tour of Oprah Winfrey's The Color Purple, "Lorraine" in Jerry Mitchell's production of Hairspray at the Hollywood Bowl and she originated the role of "Liz" in SURF the musical at the Planet Hollywood Casino in Las Vegas. Tiffany danced her way to the big screen in the feature films: "LA LA Land", "Gangster Squad" and "Make your Move". Tiffany has since then been training at the Master Level with Anthony Meindl's Acting Workshop & recently booked roles on Anger Management, American Crime Story: The People vs. OJ Simpson, Hart of Dixie, Scorpion, CSI:Cyber, Dice, The Mindy Project, Timeless, Major Crimes, Big Bang Theory, NCIS, and Criminal Minds. She is a proud member of Actors Equity, & SAG-AFTRA. Along with continual acting, voice, & dance training, Tiffany is extremely excited to continue on a path of love, light, and success.
Tiffany Daniels is a member of Actress 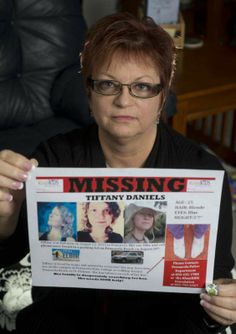 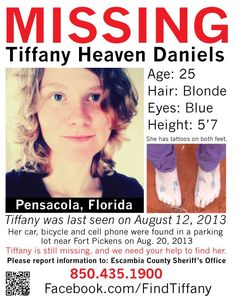 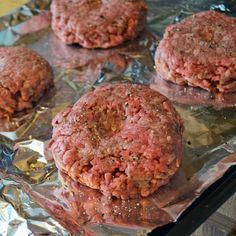 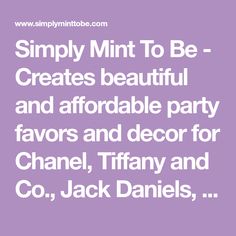 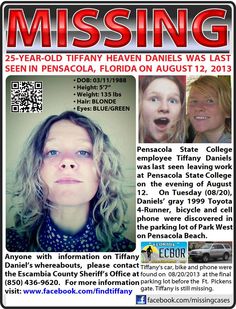 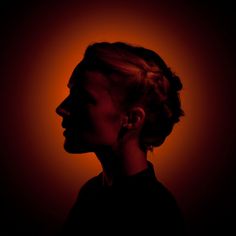 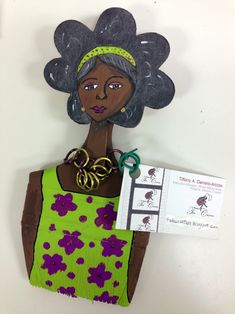 When Harnett learned that Tiffany's boyfriend had left Pensacola the day before, he began exploring that angle. He had called Tiffany upon his arrival in Austin on the 11th, but not at all on the 12th. He was cooperative and provided fingerprints and DNA samples, and his cell-phone records showed he had indeed been in the Austin area all weekend, suggesting he had not secretly returned to Pensacola.

Harnett also considered that perhaps Daniels had been depressed over his departure. Her sister later told Disappeared that she had seemed a little less vivacious than usual earlier in 2013. But she had plans for the immediate future: besides the trip to Austin she had planned a dance in two weeks time. It did not seem like she had taken her own life, or started a new one elsewhere.

The Daniels family began to fear that Tiffany had not been found because she had somehow left Pensacola during that week between the last sighting and the beginning of the search—and not voluntarily. They began researching human trafficking as a possible explanation. They saw possible similarities between Tiffany's unsolved case and that of another woman who had recently been drugged and abducted from nearby Panama City and taken to New Orleans by two men who told her she was to work as a prostitute.

Before the episode aired, the first new evidence in the case since the original investigation surfaced. In December 2015, the Daniels and the police disclosed that in the wake of coverage of the case's second anniversary four months earlier, a citizen had come forward and told the police that on the day Tiffany's car was discovered, they had seen a man in his thirties wearing red shorts and no shirt opening up the car's tailgate, a report consistent with the two witnesses who said they saw a man leave the car after it was parked there. The witness remembered this because the car had been parked unusually, facing oncoming traffic, in an area reserved for wildlife.

Several theories have been put forth to account for Daniels's disappearance, ranging from foul play to an accidental drowning. Based on an anonymous tip and several reported sightings further west along Interstate 10, her family believes she was a victim of human trafficking and may still be alive. The case was the subject of a 2016 episode of Investigation Discovery's Disappeared.