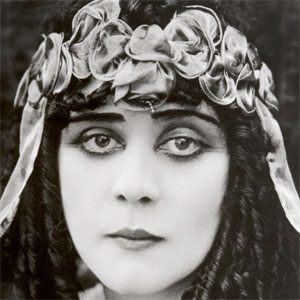 She became Hollywood's first sex symbol after playing the title character in Cleopatra.

She made her Broadway debut in 1908 and began shooting films on the East Coast, quickly becoming the definitive vamp actress.

She attained the heights of fame for her femme fatale roles as much as for her publicity. Her stage name was an anagram for Arab Death, posing in her pictures with snakes and skulls.

She was born Theodosia Burr Goodman, the daughter of a Jewish tailor, in Cincinnati, Ohio.

At the height of her fame, her $4,000-per-week earnings trailed only that of Charlie Chaplin and Mary Pickford.