Talking Heads was born, is Soundtrack, Actor, Composer. Started performing in the New York club, CBGBs. They released their first album, "Talking Heads: 77", in 1977. They recorded the film, Stop Making Sense (1984), in 1984, with director Jonathan Demme. After releasing their 1988 album, Naked, the group broke up. In 1992, they released "Popular Favorites: Sand in the Vaseline", a 2-disc set of greatest hits with rarities and never-before-released hits. After 1992, the group never got together again until 1999, to record the commentary for the special edition "Stop Making Sense" DVD. They played for the first time in a decade in 2002, when they were inducted into the Rock and Roll Hall of Fame. They played four early hits there: "Psycho Killer", "Life During Wartime", "Burning Down the House" and "Take Me to the River". Now, in 2005, they will be re-releasing all their albums remastered to perfection in a box-set complete with unreleased songs, included. So far, no reunion date has been set for them to play.
Talking Heads is a member of Soundtrack 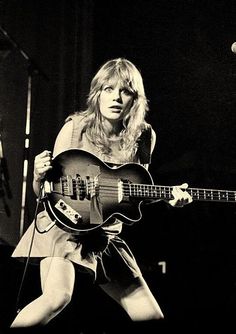 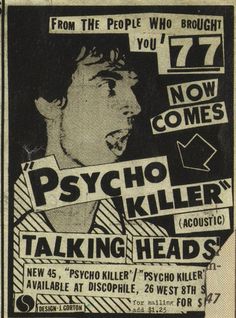 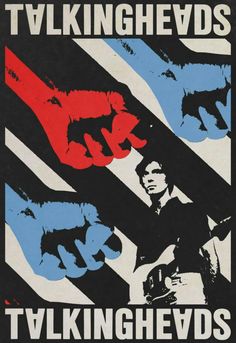 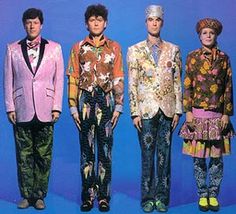 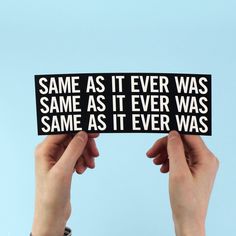 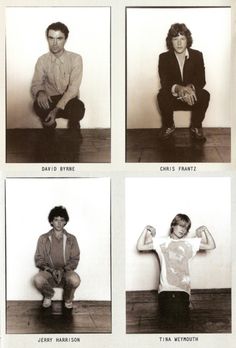 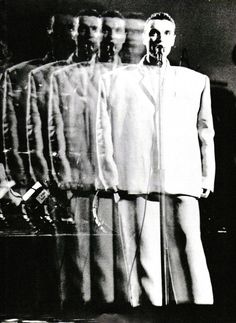 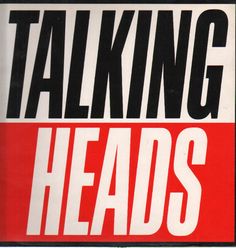 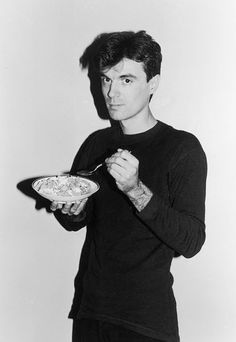 AllMusic stated that Talking Heads, one of the most celebrated bands of the 1970s and 1980s, by their breakup "had recorded everything from art-funk to polyrhythmic worldbeat explorations and simple, melodic guitar pop". Talking Heads' art pop innovations have had a long-lasting impact. Along with other groups such as Devo, the Ramones and Blondie, they helped define the new wave genre in the United States. Meanwhile, the more worldly popularities like 1980's Remain in Light helped bring African rock to the western world.

Talking Heads have been cited as an influence by many artists, including Eddie Vedder, R.E.M., The Weeknd, Vampire Weekend, Primus, Bell X1, The 1975, The Ting Tings, Nelly Furtado, Kesha, St. Vincent, and Radiohead, who took their name from the Talking Heads song "Radio Head" from the 1986 album True Stories. The Italian filmmaker and Director Paolo Sorrentino, in receiving the Oscar for his film La Grande Bellezza in 2014, thanked Talking Heads among others as his sources of inspiration.

In a later interview, Weymouth recalled how the group chose the name Talking Heads: "A friend had found the name in the TV Guide, which explained the term used by TV studios to describe a head-and-shoulder shot of a person talking as 'all content, no action'. It fit." Later that year, the trio recorded a series of demos for CBS, but the band was not signed to the label. They quickly drew a following and were signed to Sire Records in November 1976. The group released their first single in February that year, "Love → Building on Fire". In March 1977, they added Jerry Harrison (keyboards, guitar, backing vocals), formerly of Jonathan Richman's band The Modern Lovers.

Frantz and Weymouth, who married in 1977, had been recording on the side as Tom Tom Club since 1981. Tom Tom Club's self-titled debut album sold almost as well as Talking Heads themselves, leading to the band appearing in Stop Making Sense. They achieved several pop/rap hits during the dance-club cultural boom era of the early 1980s, particularly in the UK, where they still enjoy a strong fan following today. Their best-known single, "Genius of Love", has been sampled numerous times, notably on old school hip hop classic "It's Nasty (Genius of Love)" by Grandmaster Flash and on Mariah Carey's 1995 hit "Fantasy". They also have produced several artists, including Happy Mondays and Ziggy Marley. The Tom Tom Club continue to record and tour intermittently, although commercial releases have become sporadic since 1991.

1978's More Songs About Buildings and Food brought about the band's long-term collaboration with Producer Brian Eno, who had previously worked with Roxy Music, David Bowie, John Cale and Robert Fripp; the title of Eno's 1977 song "King's Lead Hat" is an anagram of the band's name. Eno's unusual style meshed well with the group's artistic sensibilities, and they began to explore an increasingly diverse range of musical directions, from post-punk to psychedelic funk to African music. This recording also established the band's long-term recording studio relationship with the famous Compass Point Studios in Nassau, Bahamas. More Songs... cover of Al Green's "Take Me to the River" broke Talking Heads into general public consciousness and gave the band their first Billboard Top 30 hit.

The Eno-Talking Heads experimentation continued with 1979's Fear of Music, which flirted with the darker stylings of post-punk rock, mixed with white funkadelia and subliminal references to the geopolitical instability of the late 1970s. Music Journalist Simon Reynolds cited Fear of Music as representing the Eno-Talking Heads collaboration "at its most mutually fruitful and equitable". The single "Life During Wartime" produced the catchphrase "This ain't no party, this ain't no disco." The song refers to the Mudd Club and CBGB, two popular New York nightclubs of the time.

1980's Remain in Light was heavily influenced by the afrobeat of Nigerian bandleader Fela Kuti, whose music Eno had introduced to the band. It explored West African polyrhythms, weaving these together with Arabic music from North Africa, disco funk, and "found" voices. These combinations foreshadowed Byrne's later interest in world music. In order to perform these more complex arrangements, the band toured with an expanded group that included Adrian Belew and Bernie Worrell, among others, first at the Heatwave festival in August, and later in their concert film Stop Making Sense. During this period, Tina Weymouth and Chris Frantz also formed a commercially successful splinter group, Tom Tom Club, influenced by the foundational elements of hip hop, and Harrison released his first solo album, The Red and the Black. Likewise, Byrne—in collaboration with Eno—released My Life in the Bush of Ghosts, which incorporated world music and found sounds, as well as including a number of other prominent international and post-punk Musicians. All were released by Sire.

1983 saw the release of Speaking in Tongues, a commercial breakthrough that produced the band's only American Top 10 hit, "Burning Down the House". Once again, a striking video was inescapable owing to its heavy rotation on MTV. The following tour was documented in Jonathan Demme's Stop Making Sense, which generated another live album of the same name. The tour in support of Speaking in Tongues was their last.

Three more albums followed: 1985's Little Creatures (which featured the hit singles "And She Was" and "Road to Nowhere"), 1986's True Stories (Talking Heads covering all the Soundtrack songs of Byrne's musical comedy film, in which the band also appeared), and 1988's Naked. Little Creatures offered a much more American pop-rock sound as opposed to previous efforts. Similar in genre, True Stories hatched one of the group's most successful hits, "Wild Wild Life", and the accordion-driven track "Radio Head", which became the etymon of the band of the same name. Naked explored politics, sex, and death, and showed heavy African influence with polyrhythmic styles like those seen on Remain in Light. During that time, the group was falling increasingly under David Byrne's control and, after Naked, the band went on "hiatus".

It took until December 1991 for an official announcement to be made that Talking Heads had broken up. Their final release was "Sax and Violins", an original song that had appeared earlier that year on the Soundtrack to Wim Wenders' Until the End of the World. During this breakup period, Byrne continued his solo career, releasing Rei Momo in 1989 and The Forest in 1991. This period also saw a revived flourish from both Tom Tom Club (Boom Boom Chi Boom Boom and Dark Sneak Love Action) and Harrison (Casual Gods and Walk on Water), who toured together in the summer of 1990.

Despite David Byrne's lack of interest in another album, Tina Weymouth, Chris Frantz, and Jerry Harrison reunited for a one-off album called No Talking, Just Head under the name The Heads in 1996. The album featured a number of vocalists, including Debbie Harry of Blondie, Johnette Napolitano of Concrete Blonde, Andy Partridge of XTC, Gordon Gano of Violent Femmes, Michael Hutchence of INXS, Ed Kowalczyk of Live, Shaun Ryder of Happy Mondays, Richard Hell, and Maria McKee. The album was accompanied by a tour, which featured Johnette Napolitano as the vocalist. Byrne took legal action against the rest of the band to prevent them using the name "Talking Heads", something he saw as "a pretty obvious attempt to cash in on the Talking Heads name". They opted to record and tour as "The Heads". Likewise, Byrne continues his solo career.

The band played "Life During Wartime", "Psycho Killer", and "Burning Down the House" together on March 18, 2002, at the ceremony of their induction into the Rock and Roll Hall of Fame. However, reuniting for a concert tour is unlikely. David Byrne states: "We did have a lot of bad blood go down. That's one reason, and another is that musically we're just miles apart." Weymouth, however, has been critical of Byrne, describing him as "a man incapable of returning friendship" and saying that he doesn't "love" her, Frantz, and Harrison.

Meanwhile, Harrison became a record Producer of some note – his résumé includes the Violent Femmes' The Blind Leading the Naked, the Fine Young Cannibals' The Raw and the Cooked, General Public's Rub It Better, Crash Test Dummies' God Shuffled His Feet, Live's Mental Jewelry, Throwing Copper and The Distance To Here, No Doubt's song "New" from Return of Saturn, and in 2010, work by The Black and White Years and Kenny Wayne Shepherd.