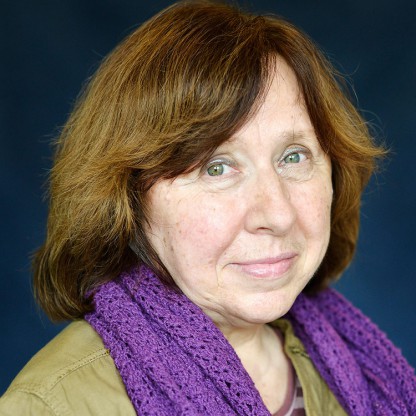 Svetlana Alexievich was born on May 31, 1948 in Ivano-Frankivsk, Belarusian, is Write and Nobel Prize Winner in Literature. Svetlana Alexandrovna Alexievich is an eminent Belarusian journalist and writer. Born in Stanislaviv, Ukraine during the Soviet era, she had the passion to write since a young age and began to nurture this interest by contributing to the school newspaper. Later, after completing her graduation, she began her career as a journalist and simultaneously pursued writing. In her writing career she has been able to document experiences and memories related to several events like the World War II, Downfall of the Soviet Union, The Afghan War, Chernobyl disaster etc. She believed in creating a history of human feelings rather than a mere account of the events and associated facts. A number of her works have been converted into theatre scripts and feature films. Svetlana Alexievich has received numerous awards from the government and private bodies, in appreciation for her literary work. She was the recipient of the 2015 Nobel Prize in Literature.
Svetlana Alexievich is a member of Writers 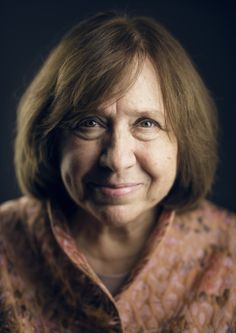 If you look back at the whole of our history, both Soviet and post-Soviet, it is a huge common grave and a blood bath. An eternal dialog of the executioners and the victims. The accursed Russian questions: what is to be done and who is to blame. The revolution, the gulags, the Second World War, the Soviet–Afghan war hidden from the people, the downfall of the great empire, the downfall of the giant socialist land, the land-utopia, and now a challenge of cosmic dimensions – Chernobyl. This is a challenge for all the living things on earth. Such is our history. And this is the theme of my books, this is my path, my circles of hell, from man to man.

Alexievich has been awarded many awards, including:

She is a member of the advisory committee of the Lettre Ulysses Award.

Born in the west Ukrainian town of Stanislav (since 1962 Ivano-Frankivsk) to a Belarusian father and a Ukrainian mother, Svetlana Alexievich grew up in Belarus. After finishing school she worked as a reporter in several local newspapers before graduating from Belarusian State University (1972) and becoming a correspondent for the literary magazine Neman in Minsk (1976).

Her first book, War's Unwomanly Face, came out in 1985. It was repeatedly reprinted and sold more than two million copies. The book was finished in 1983 and published (in short edition) in Oktyabr, a Soviet monthly literary magazine, in February 1984. In 1985, the book was published by several publishers, and the number of printed copies reached 2,000,000 in the next five years. This novel is made up of monologues of women in the war speaking about the aspects of World War II that had never been related before. Another book, The Last Witnesses: the Book of Unchildlike Stories, describes personal memories of children during wartime. The war seen through women's and children's eyes revealed a new world of feelings. In 1993, she published Enchanted with Death, a book about attempted and completed suicides due to the downfall of the Soviet Union. Many people felt inseparable from the Communist ideology and unable to accept the new order surely and the newly interpreted history.

Her books were not published by Belarusian state-owned publishing houses after 1993, while private publishers in Belarus have only published two of her books: Chernobyl Prayer in 1999 and Second-hand Time in 2013, both translated into Belarusian. As a result, Alexievich has been better known in the rest of world than in Belarus.

During her career in journalism, Alexievich specialised in crafting narratives based on witness testimonies. In the process, she wrote oral histories of several dramatic events in Soviet history: the Second World War, the Afghan War, the fall of the Soviet Union, and the Chernobyl disaster. After political persecution by the Lukashenko administration, she left Belarus in 2000. The International Cities of Refuge Network offered her sanctuary and during the following decade she lived in Paris, Gothenburg and Berlin. In 2011, Alexievich moved back to Minsk.