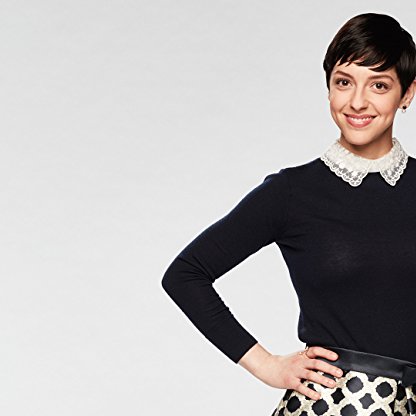 Steffi DiDomenicantonio was born on April 28, 1989, is Actress, Soundtrack. Steffi DiDomenicantonio is a Toronto based Dora nominated performer who has appeared on stages across Canada and the United States. She was the Top 5 finalist on Season 4 of Canadian Idol and toured the United States with the first Broadway National Tour of Spring Awakening as Ilse. She performed the show 600 times in 44 different cities over the span of 2 years. Steffi has also been seen on the small screen in a variety of French and English TV shows and national commercials as well as on the big screen in the feature film Stage Fright with rock star legend Meatloaf.Montreal-born and Ottawa-raised, Steffi D is the nickname she acquired from the judges and Ben Mulroney during her run on Canadian Idol in 2006. During her time on the show, she worked and performed with artists such as Cindy Lauper, Martina McBride, Nelly Furtado, Roger Hodgson, Dennis DeYoung and Chantal Kreviazuk.
Steffi DiDomenicantonio is a member of Actress

Since the end of her run on that series, she has performed on stage in musical theatre roles, including national tours of Spring Awakening and Come from Away. In 2013, she received a Dora Mavor Moore Award nomination for best Actress in a musical for her appearance in the Young People's Theatre production of Rodgers and Hammerstein's Cinderella.