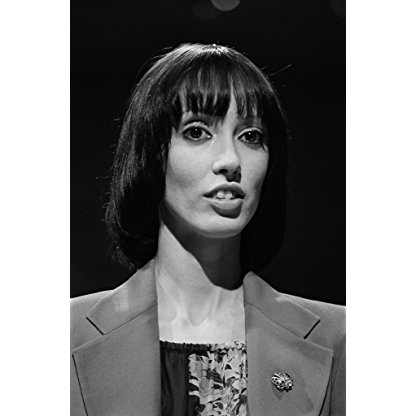 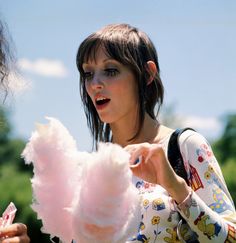 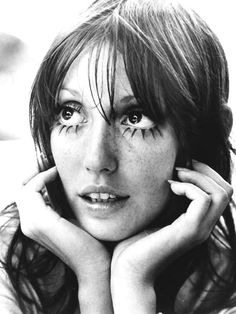 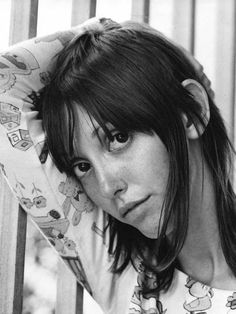 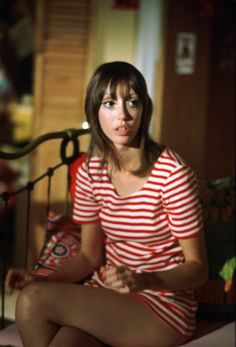 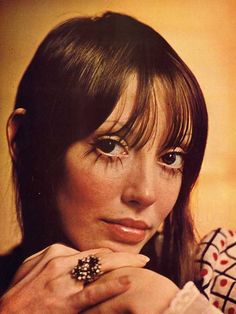 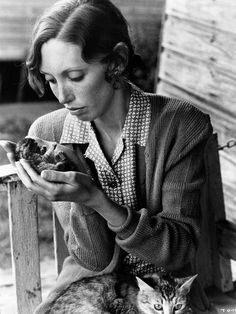 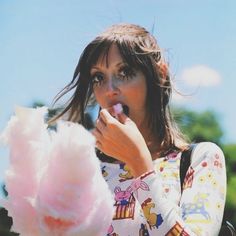 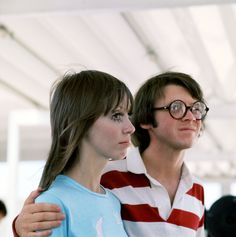 Shelley Duvall is like a precious piece of china with a tinkling personality. She looks and sounds like almost nobody else, and if it is true that she was born to play the character Olive Oyl (and does so in Altman's new musical Popeye), it is also true that she has possibly played more really different kinds of characters than almost any other young actress of the 1970s.

Shelley Alexis Duvall was born on July 7, 1949, in Houston, Texas, the daughter of Bobbie Ruth Crawford and Robert Richardson "Bobby" Duvall (1919–1995), a Lawyer (not to be confused with actor Robert Duvall). Duvall has three brothers: Scott, Shane, and Stewart.

Duvall was married to Artist Bernard Sampson between 1970 and 1974; the couple divorced as Duvall's acting career accelerated.

Altman chose Duvall for roles as an unsatisfied mail-order bride in McCabe & Mrs. Miller (1971), the daughter of a convict and mistress to Keith Carradine's character in Thieves Like Us (1974), a spaced-out groupie in Nashville (1975), and a sympathetic Wild West woman in Buffalo Bill and the Indians, or Sitting Bull's History Lesson (1976).

While she was shooting in New York for her part in Woody Allen's Annie Hall (1977), she met singer/songwriter Paul Simon. They lived together for two years. Their relationship ended when Duvall introduced Simon to her friend, Actress Carrie Fisher; Fisher took up with Simon.

Duvall is an animal lover, caring for and incorporating many of her favorite pets into original children's stories and songs. In the 1980s and 1990s, she lived in Benedict Canyon in California with her pets.

Her role of Pansy in Terry Gilliam's Time Bandits (1981) followed. In 1982, Duvall narrated, hosted and was executive Producer of the children's television program Faerie Tale Theatre. She starred in seven episodes of the series; "Rumpelstiltskin" (1983), "Rapunzel" (1983), "The Nightingale" (1983), "Snow White and the Seven Dwarfs" (1984), "Puss in Boots" (1985), and "Aladdin and His Wonderful Lamp" (1986). Since the program's first episode "The Frog Prince", which starred Robin Williams and Teri Garr, Duvall produced 27 hour-long episodes of the program. In 1985, she created Tall Tales & Legends, another one-hour anthology series for Showtime, which featured adaptations of American folk tales. As with Faerie Tale Theatre, the series starred well-known Hollywood actors with Duvall as host, executive Producer, and occasional guest star. The series ran for nine episodes and garnered Duvall an Emmy nomination.

In 1988, Duvall founded a new production company called Think Entertainment to develop programs and television movies for cable channels. She created Nightmare Classics (1989), a third Showtime anthology series that featured adaptations of well-known horror stories by authors including Edgar Allan Poe. Unlike the previous two series, Nightmare Classics was aimed at a teenage and adult audience. It was the least successful series that Duvall produced for Showtime and ran for only four episodes.

The following year, Think Entertainment joined the newly formed Universal Family Entertainment to create Duvall's fourth Showtime original series, Shelley Duvall's Bedtime Stories, which featured animated adaptations of children's storybooks with Celebrity narrators and garnered her a second Emmy nomination. Duvall produced a fifth series for Showtime, Mrs. Piggle Wiggle, before selling Think Entertainment in 1993 and retiring as a Producer. Duvall's production work gained her six CableACE Awards and one Peabody Award. A year later, Duvall landed a guest spot on the television series L.A. Law as Margo Stanton, a show dog owner and breeder who presses charges against the owner of a Welsh Corgi that mated with her prize-winning Afghan Hound.

In the 2000s, Duvall accepted minor roles, including the mother of Matthew Lawrence's character in the horror-comedy Boltneck and Haylie Duff's aunt in the independent family film Dreams in the Attic, which was sold to the Disney Channel but was never released. Her most recent acting appearance was a small role in the 2002 independent film Manna from Heaven.

Duvall has lived out of public view since her retirement in 2002. In November 2016, USA Today reported that she appeared to be suffering from mental illness. Later that month, she appeared on an episode of the television show Dr. Phil. Vivian Kubrick, whose father directed Duvall in The Shining, described the interview as "exploitive entertainment" and "appallingly cruel". After the episode aired, the nonprofit Actors Fund of America contacted her about providing assistance.

She appeared as the vain, over-friendly, but harmless Countess Gemini—sister to the calculating Gilbert Osmond (John Malkovich)—in Jane Campion's 1996 adaptation of the Henry James novel The Portrait of a Lady. A year later, she played a beatific nun in the comedy film Changing Habits and a besotted, murderous, ostrich-farm owner in Guy Maddin's fourth feature Twilight of the Ice Nymphs. The same year she played Chris Cooper's character's gullible wife who yearns for a better life in Horton Foote's made-for-television film, Alone. Duvall continued to make film and television appearances throughout the late-1990s. In 1998, she played Drew Barrymore's mother in the comedy Home Fries and Hilary Duff's aunt in the direct-to-video children's film Casper Meets Wendy. Near the end of the decade, she returned to the horror genre with Tale of the Mummy (1998) and The 4th Floor (1999).

While Duvall was producing Fairy Tale Theatre, it was reported that she was to star as the lead in the film adaptation of Tom Robbins’s Even Cowgirls Get the Blues, which starred Mick Jagger, Jerry Hall, her sister Cindy Hall and Sissy Spacek. The project was delayed and when it released in 1993 it starred an entirely different cast. She also landed roles in films and television series: the mother of a boy whose dog is struck by car in Tim Burton's short film Frankenweenie (1984), a lonely and timid woman who receives a message from a flying saucer in The Twilight Zone episode "The Once and Future King/A Saucer of Loneliness", and the friend of Steve Martin's character in the comedy Roxanne (1987).