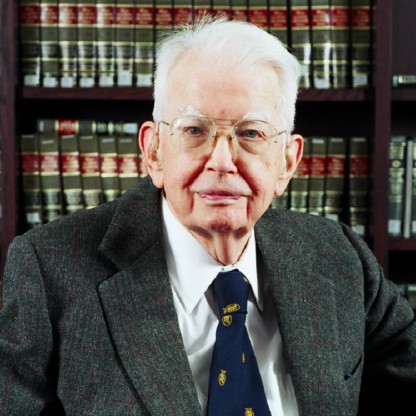 Ronald Coase was born on December 29, 1910 in Willesden, London, United Kingdom, British, is Economist. Ronald Coase was a British economist and author who won the Nobel Prize in Economics in 1991 for his discovery and clarification of the significance of transaction costs and property rights for the institutional structure and functioning of the economy. A highly learned and distinguished scholar, he was noted for his brilliant acumen and know-how of the minutest details of the subject. For most of his life, Coase held the position of Clifton R. Musser Professor Emeritus of Economics at the University of Chicago Law School. He is often regarded as the ‘father’ of reform in the policy for allocation of the electromagnetic spectrum, based on his article ‘The Federal Communications Commission’ (1959), wherein he criticised spectrum licensing, suggesting property rights as a more efficient method of allocating spectrum to users. Coase rose to fame for his 1937 article ‘The Nature of the Firm’, which introduced to the readers the concept of transaction costs to explain the nature and limits of firms. His 1960 article, ‘The Problem of Social Cost’ suggested that well-defined property rights could overcome the problems of externalities.
Ronald Coase is a member of Intellectuals & Academics 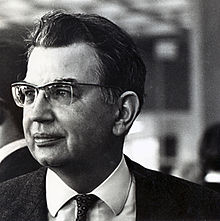 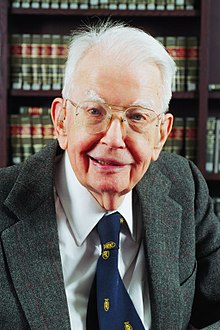 It is generally agreed that this article has had an immense influence on legal scholarship, but this was no part of my intention. For me, "The Problem of Social Cost" was an essay in economics. It was aimed at economists. What I wanted to do was to improve our analysis of the working of the economic system. Law came into article because, in a regime of positive transaction costs, the character of the law becomes one of the main factors determining the performance of the economy. If transaction costs were zero (as is assumed in standard economic theory) we can imagine people contracting around the law whenever the value of production would be increased by a change in the legal position. But in a regime of positive transaction costs, such contracting would not occur whenever transaction costs were greater than the gain that such a redistribution of rights would bring. As a consequence the rights which individuals possess will commonly be those established by the law, which in these circumstances can be said to control the economy. As I have said, in "The Problem of Social Cost" I had no intention of making a contribution to legal scholarship. I referred to legal cases because they afforded examples of real situations as against the imaginary ones normally used by economists in their analysis. It was undoubtedly an economist who invented the widget. But in "The Problem of Social Cost" I did something else. I pointed out that the judges in their opinions often seemed to show a better understanding of the economic problem than did many economists even though their views were not always expressed in a very explicit fashion. I did this not to praise the judges but to shame economists.

Ronald Harry Coase was born in Willesden, a suburb of London, on 29 December 1910. His father, Henry Joseph Coase (1884–1973) was a telegraphist for the post office, as was his mother, Rosalie Elizabeth Coase (née Giles; 1882–1972), before marriage. As a child, Coase had a weakness in his legs, for which he was required to wear leg-irons. Due to this Problem, he attended the school for physical defectives. At the age of 12, he was able to enter the Kilburn Grammar School on scholarship. At Kilburn, Coase completed the first year of his BComm degree and then passed on to the University of London. Coase married Marion Ruth Hartung of Chicago, Illinois in Willesden, England, 7 August 1937.

In "The Nature of the Firm" (1937) – a brief but highly influential essay – Coase attempts to explain why the economy features a number of Business firms instead of consisting exclusively of a multitude of independent, self-employed people who contract with one another. Given that "production could be carried on without any organization [that is, firms] at all", Coase asks, why and under what conditions should we expect firms to emerge?

Upon publishing his article The Federal Communications Commission in 1959, Coase received negative feedback from the faculty at the University of Chicago over his conclusions and apparent conflicts with A. C. Pigou. According to Coase, "What I said was thought to run counter to Pigou’s analysis by a number of economists at the University of Chicago and was therefore, according to them, wrong. At a meeting in Chicago I was able to convince these economists that I was right and Pigou’s analysis faulty." Coase had presented his paper in 1960 during a seminar in Chicago, to twenty senior Economist including George Stigler and Milton Friedman. He gradually won over the usually skeptic audience, in what has later been considered a “paradigm-shifting moment” in the genesis of Chicago Law and Economics. Coase would join the Chicago faculty four years later.

Published in the Journal of Law and Economics in 1960, while Coase was a member of the Economics department at the University of Virginia, "The Problem of Social Cost" provided the key insight that it is unclear where the blame for externalities lies. The Example he gave was of a rancher whose cattle stray onto the cropland of his neighbour. If the rancher is made to restrict his cattle, he is harmed just as the farmer is if the cattle remain unrestrained.

Nearing his 100th birthday, Coase was working on a book concerning the rise of the economies of China and Vietnam. In an interview, Coase explained the mission of the Coase China Society and his vision of economics and the part to be played by Chinese economists. Coase was honoured and received an honorary doctorate from the University at Buffalo Department of Economics in May 2012.

Coase was research advisor to the Ronald Coase Institute, an organisation that promotes research on institutions and organizations – the laws, rules, customs, and norms – that govern real economic systems, with particular support for young scholars from developing and transitional countries.

Guido Calabresi wrote that Coase’s focus on transaction costs in The Nature of the Firm was the result of his socialist beliefs. Reflecting on this, Coase wrote, "It is very difficult to know where one’s ideas come from but for all I know he may well be right." Coase continued: