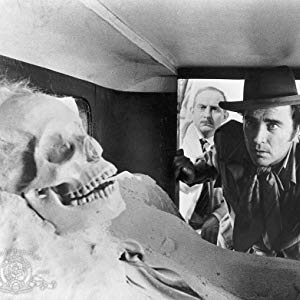 Tall, handsome, and charismatic actor Robert Quarry was born on November 3, 1925 in Santa Rosa, California. His father was a doctor. Robert's grandmother first introduced him to the world of theater.
Robert Quarry is a member of Actor

Tall, handsome, and charismatic actor Robert Quarry was born on November 3, 1925 in Santa Rosa, California. His father was a doctor. Robert's grandmother first introduced him to the world of theater. Quarry finished school at age 14 and was on the swimming team in high school. In the early 1940s he was a busy juvenile actor on the radio; he even had a regular part on the "Dr. Christian" program. Robert joined the Army Combat Engineers at age 18 and formed a theatrical group which put on a hit production of the play "The Hasty Heart' that Quarry both acted in and helped produce.

Quarry made his film debut with a small role in Alfred Hitchcock's Shadow of a Doubt (1943). He acted alongside Paul Newman in both Winning (1969) and WUSA (1970). Robert worked steadily throughout the 1950s and 1960s in both movies and TV shows alike. Quarry achieved his greatest enduring cult popularity with his splendidly sardonic portrayal of suavely sinister bloodsucker Count Yorga in the excellent drive-in hit Count Yorga, Vampire (1970) and its solid sequel The Return of Count Yorga (1971) Robert capitalized on his newfound fright feature fame by appearing in several hugely enjoyable horror pictures: at his commanding best as vampire hippie guru Khorda in the offbeat Deathmaster (1972), (Quarry was also an associate producer on this film), driven scientist Darius Biederbeck in Dr. Phibes Rises Again (1972), evil mob boss Morgan in the groovy blaxploitation zombie opus Sugar Hill (1974), and quite amusing as slimy producer Oliver Quayle in Madhouse (1974). Quarry popped up in the disaster outing Rollercoaster (1977) as the Mayor of Los Angeles.

Alas, Robert's career was abruptly curtailed by a serious car accident, but he thankfully recovered and made a welcome comeback in the mid-1980s. He appeared in a slew of entertainingly trashy low-budget movies for prolific exploitation flick director Fred Olen Ray. Moreover, Quarry was featured in guest spots on such TV shows as "Studio 57," "The Lone Ranger," "Hallmark Hall of Fame," "Mike Hammer," "The Fugitive," "Perry Mason," "Ironside," "Cannon," "The Rockford Files," and "Buck Rogers in the 25th Century." Outside of his work in movies and television, Robert also had a highly distinguished stage career. Quarry acted in Broadway productions of "As You Like It," "The Taming of the Shrew," "Richard III," and "Gramercy Ghost." He acted alongside Cloris Leachman in "Design for Living" at the Stage Society in Los Angeles and in 1966 went on tour with a traveling roadshow production of "Who's Afraid of Virginia Woolf?". He regularly studied his craft at the Actors Lab in Hollywood.

Blessed with an IQ of 168, Quarry was a Lifemaster at bridge. In addition, Robert studied cooking at the Cardon Bleu School in Manhattan and was the author of the best-selling cookbook "Wonderfully Simple Recipes for Simply Wonderful Food." Robert Quarry died at age 83 from a heart condition on February 20, 2009 in Woodland Hills, California. Good night and rest in peace, Count Yorga.