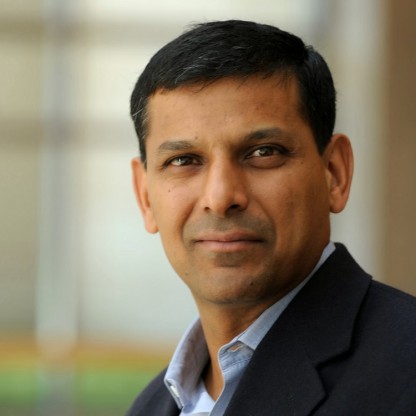 Raghuram Rajan was born on February 03, 1963 in Bhopal, Indian, is Adviser. Raghuram Rajan is an Indian economist and the former Governor of the Reserve Bank of India, who is currently the Vice-Chairman of the Bank for International Settlements. He served as the 23rd Governor of the Reserve Bank of India and his three year tenure is known for bringing the bleeding rupee back to strength and for battering down the inflation fangs to 6 per cent from double-digit levels. After a glorious career as an academician at the Booth School of Business, he was hired by the International Monetary Fund as its Chief Economist. Always a high-achiever, Rajan completed his schooling from some of the best educational institutions in the country and abroad. An alumnus of IIT-Delhi and IIM-A, Rajan's thesis 'Essays on Banking' earned him a Ph.D. in management from MIT Sloan School of Management. He is always known to be a pragmatist, which is reflected in his various papers especially the controversial piece of writing ‘Has Financial Development Made the World Riskier?’. Though initially ridiculed, Raghuram was later commended for predicting the US economic crisis of 2008 beforehand. His straight forward and practical approach has been instrumental in battling the inflation which plagued the nation when he assumed the role of RBI Governor. A member of the Group of Thirty, Rajan is a crusader of the free market system. In his book ‘Saving Capitalism from the Capitalists’ he has suggested that capitalism serves as a handy tool to abate poverty and provides equal opportunities for all.
Raghuram Rajan is a member of Intellectuals & Academics 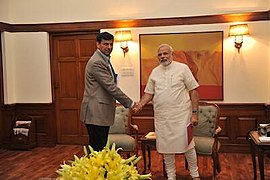 Raghuram Rajan was born on 3 February 1963 in Bhopal, Madhya Pradesh into a Tamil Brahmin family. He is the third of four children of R Govindarajan, an Indian Police Service officer who topped his 1953 batch.

Assigned to the Intelligence Bureau, R Govindarajan was posted to Indonesia in 1966. In 1968 he joined the newly created external intelligence unit of the Intelligence Bureau, the Research and Analysis Wing (R&AW) where he served as staff officer under spymaster R. N. Kao and became part of the "Kaoboys". In 1970 he was posted to Sri Lanka, where Raghuram Rajan missed school one year because of political turmoil. After Sri Lanka, R Govindarajan was posted to Belgium where the children attended a French school. In 1974 the family returned to India. Throughout his childhood, Rajan presumed his father to be a diplomat since the family traveled on diplomatic passports. He was a half-term student of Campion School, Bhopal until 1974.

Rajan's elder brother works for a solar company in the United States. Rajan's sister is married to an Indian Administrative Service officer and is a French Teacher in New Delhi. Rajan's younger brother, Mukund Rajan, was born in Chennai in 1968. He was the Brand Custodian and Chief Ethics Officer of Tata Sons

From 1974 to 1981 Rajan attended Delhi Public School, RK Puram, In 1981 he enrolled at Indian Institute of Technology, Delhi for a bachelor's degree in Electrical engineering. In the final year of his four-year degree, he headed the Student Affairs Council. He graduated in 1985 and was awarded the Director's Gold Medal as the best all-round student. In 1987, he earned a Post Graduate Diploma in Business Administration from the Indian Institute of Management Ahmedabad . After graduation, he joined Tata Administrative Services as a management trainee but left after a few months to join the doctoral program in management at the MIT Sloan School of Management. In 1991, he received a PhD for his thesis titled Essays on Banking under the supervision of Stewart Myers. Rajan's research interests were in banking, corporate Finance, and economic development, especially the role Finance plays in it.

Rajan is a vegetarian. He likes the outdoors and plays tennis and squash. He enjoys reading Tolstoy, J. R. R. Tolkien and Upamanyu Chatterjee. Rajan is an avid quizzer who appeared on national television with some of his friends in 1980s. He has also participated in various marathons, such as the Standard Chartered Mumbai Marathon 2015.

In 1991, Rajan joined the Booth School of Business at the University of Chicago and went on to become a Professor of Finance there. In 2003, he taught an MBA course in international corporate Finance and a PhD course in the theory of financial decisions.

From October 2003 to December 2006 he served as Chief Economist at the International Monetary Fund (IMF).

In 2005, at a celebration honouring Alan Greenspan, who was about to retire as chairman of the US Federal Reserve, Rajan delivered a controversial paper that was critical of the financial sector. In that paper, "Has Financial Development Made the World Riskier?", Rajan "argued that disaster might loom." Rajan argued that financial sector managers were encouraged to "take risks that generate severe adverse consequences with small probability but, in return, offer generous compensation the rest of the time. These risks are known as tail risks. But perhaps the most important concern is whether banks will be able to provide liquidity to financial markets so that if the tail risk does materialise, financial positions can be unwound and losses allocated so that the consequences to the real economy are minimised."

The response to Rajan's paper at the time was negative. For Example, former U.S. Treasury Secretary and former Harvard President Lawrence Summers called the warnings “misguided” and Rajan himself a "luddite". However, following the 2008 economic crisis, Rajan's views came to be seen as prescient; by January 2009, The Wall Street Journal proclaimed that now, "few are dismissing his ideas." In fact, Rajan was extensively interviewed on the global crisis for the Academy Award-winning documentary film Inside Job. Rajan wrote in May 2012 that the causes of the ongoing economic crisis in the US and Europe in the 2008–2012 period were substantially due to workforce competitiveness issues in the globalisation era, which politicians attempted to "paper-over" with easy credit. He proposed supply-side solutions of a long-term structural or national competitiveness nature: "The industrial countries should treat the crisis as a wake-up call and move to fix all that has been papered over in the last few decades... Rather than attempting to return to their artificially inflated GDP numbers from before the crisis, governments need to address the underlying flaws in their economies. In the United States, that means educating or retraining the workers who are falling behind, encouraging entrepreneurship and innovation, and harnessing the power of the financial sector to do good while preventing it from going off track. In southern Europe, by contrast, it means removing the regulations that protect firms and workers from competition and shrinking the government's presence in a number of areas, in the process eliminating unnecessary, unproductive jobs."

During May 2012, Rajan and Paul Krugman expressed differing views on how to reinvigorate the economies in the US and Europe, with Krugman mentioning Rajan by name in an opinion editorial. This debate occurred against the backdrop of a significant "austerity vs stimulus" debate occurring at the time, with some economists arguing one side or the other or a combination of both strategies. In an article in Foreign Affairs magazine, Rajan advocated structural or supply-side reforms to improve competitiveness of the workforce to better adapt to globalisation, while also supporting fiscal austerity measures (E.g., raising taxes and cutting spending), although he conceded that austerity could slow economies in the short-run and cause significant "pain" for certain constituencies. Krugman rejected this focus on structural reforms combined with fiscal austerity. Instead he advocated traditional Keynesian fiscal (government spending and investment) and monetary stimulus, arguing that the primary factor slowing the developed economies at that time was a general shortfall in demand across all sectors of the economy, not structural or supply-side factors that affected particular sectors.

In his first speech as RBI governor, Rajan promised banking reforms and eased curbs on foreign banking, following which the BSE SENSEX rose by 333 points or 1.83%. After his first day at office, the rupee rose 2.1% against the US dollar. As Governor of the RBI, Rajan made curbing inflation his primary focus, bringing down Retail inflation from 9.8% in September 2013 to 3.78% in July 2015 – the lowest since the 1990s. Wholesale inflation came down from 6.1% in September 2013 to a historic low of -4.05% in July 2015. Under Rajan, the RBI adopted consumer price index (CPI) as the key indicator of inflation, which is the global norm, despite the government recommending otherwise. Foreign exchange reserves of India grew by about 30% to the tune of $380 billion in two years. Under Rajan, the RBI has licensed two universal banks and approved eleven payments banks to extend banking services to the nearly two-thirds of the population who are still deprived of banking facilities.

In a 2014 interview, Rajan said his major targets as governor of the Reserve Bank of India were to lower inflation, increase savings and deepen financial markets, of which he believed reducing inflation was the most important. A panel he appointed proposed an inflation target for India of 6% for January 2016 and 4% (+-2%) thereafter.

In 2014 it was suggested that Rajan could take over from Christine Lagarde as head of the IMF when his term expires in 2016. On 9 November 2015, Rajan was appointed as Vice-Chairman of the Bank for International Settlements (BIS).

On 18 June 2016, Rajan announced that he will not be serving a second term as RBI Governor, and plans to return to academia. In September 2017, Rajan revealed that though he was willing to take an extension and serve a second term as RBI Governor, the government had not extended any offer to him which left him with no choice but to return to the University of Chicago. He also denied claims that the University of Chicago had, at that time, refused to accept his leave of absence to continue for a second term.

In interviews in September 2017, Rajan said the Government of India had consulted the Reserve Bank of India, during his Governorship, on the issue of demonetization but never asked to take a decision. He said the RBI was against the move and warned the government of the potential negative effects. Rajan also termed the currency notes ban exercise as, "One cannot in anyway say it has been an economic success". In addition to his work at the University of Chicago and RBI, Raghuram is also a member of the Berggruen Institute's 21st Century Council.