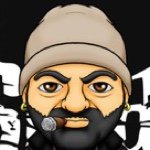 Music manager known primarily for his work with Action Bronson, The Knux, and Blink-182.

He began working with Eminem as far back as when he was selling his music on the street. He helped the rapper produce the Slim Shady LP in 1999, which launched Eminem's career.

Most of Eminem's albums feature a skit called "Paul" (Paul Rosenberg) that consist of a concerned manager who warns him against releasing the album.

Like Eminem, he grew up in Detroit. He married Allison Trudell.

In 2013, he signed rapper Danny Brown, who also hails from Detroit.