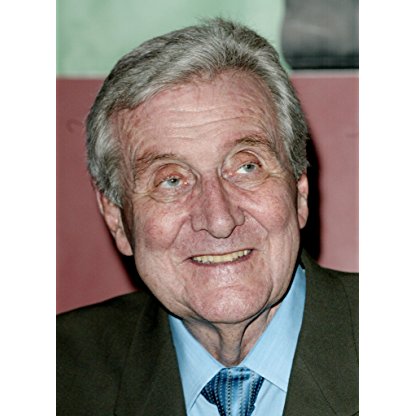 Patrick Macnee was born on February 06, 1922 in  Paddington, London, England, United Kingdom, is Actor, Costume Department, Soundtrack. British actor Patrick Macnee was born on February 6, 1922 in London, England into a wealthy and eccentric family. His father, Daniel Macnee, was a race horse trainer, who drank and gambled away the family fortune, leaving young Patrick to be raised by his gay mother, Dorothea Mary, and her lover. Shortly after graduating from Eton (from which he was almost expelled for running a gambling ring), Macnee first appeared on stage and made his film debut as an extra in Pygmalion (1938). His career was interrupted by World War II, during which he served in the Royal Navy. After military service, Macnee attended the Webber Douglas School of Dramatic Art in London on scholarship. He also resumed his stage and film career, with bit parts such as Young Jacob Marley in Scrooge (1951). Disappointed with his limited roles, Macnee left England for Canada and the United States.In 1954, he went to Broadway with an Old Vic troupe and later moved on to Hollywood, where he made occasional television and film appearances until returning to England in 1959. Once back home, he took advantage of his producing experience in Canada to become coproducer of the British television series Winston Churchill: The Valiant Years (1960). Shortly thereafter, Macnee landed the role that brought him worldwide fame and popularity in the part of John Steed, in the classic British television series The Avengers (1961). His close identification with this character limited his career choices after the cancellation of the series in 1969, prompting him to reprise the role in The New Avengers (1976), which, though popular, failed to recapture the magic of the original series. During the 1980s and 1990s, Macnee became a familiar face on American television in such series as Gavilan (1982), Empire (1984), Thunder in Paradise (1994) and Night Man (1997). In the past decade, Macnee has also made several audio recordings of book fiction.
Patrick Macnee is a member of Actor 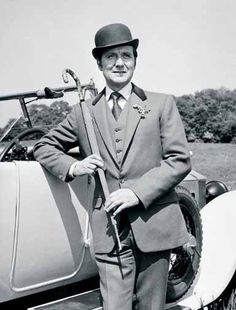 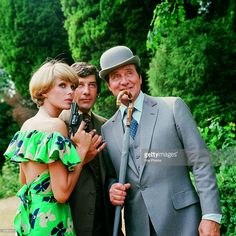 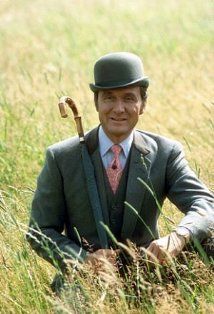 The elder of two sons, Macnee was born in Paddington, London, England on 6 February 1922; to Daniel Macnee (1877−1952) and Dorothea Mabel Macnee (née Henry) (1896−1984). His father, who was a grandson of the Scottish Artist Sir Daniel Macnee, trained race horses in Lambourn, and was known for his dress sense; he had served as an officer in the Yorkshire Dragoons in the First World War. His maternal grandmother was Frances Alice Hastings (1870−1945), who was the daughter of Vice-Admiral George Fowler Hastings and granddaughter of Hans Francis Hastings, 12th Earl of Huntingdon. His younger brother James, known as Jimmy, was born five years later.

Macnee's parents separated after his mother began to identify as a lesbian. His father later moved to India, and his mother began to live with her wealthy partner, Evelyn Spottswood, whose money came from the Dewar's whisky Business. Macnee referred to her in his autobiography as "Uncle Evelyn", and she helped pay for his schooling. He was educated at Summer Fields School and Eton College, where he was a member of the Officer Training Corps and was one of the guard of honour for King George V at St George's Chapel in 1936. He was later expelled from Eton for selling pornography and being a bookmaker for his fellow students.

Macnee nurtured his acting career in Canada early on, but he also appeared as an uncredited extra in the British films Pygmalion (1938), The Life and Death of Colonel Blimp (1943) and Laurence Olivier's Hamlet (1948), as well as some live TV dramas for the BBC, before graduating to credited parts in such films as Scrooge (US: A Christmas Carol, 1951), as the young Jacob Marley, the Gene Kelly vehicle Les Girls (1957), as an Old Bailey barrister, and the war film The Battle of the River Plate (1956). Between these occasional movie roles, Macnee spent the better part of the 1950s working in dozens of small parts in American and Canadian television and theatre, including an appearance in an episode of The Twilight Zone in 1959 ("Judgment Night"). Disappointed in his limited career development, in the late 1950s Macnee was daily smoking 80 cigarettes and drinking a bottle of whisky.

Macnee married his first wife, Barbara Douglas, in 1942. They had two children, Rupert and Jenny, and a grandson, Christopher ("Kit"). After they were divorced in 1956, his second marriage (1965−1969) was to Actress Katherine Woodville. His third marriage was to Baba Majos de Nagyzsenye, daughter of opera singer Ella Némethy. It lasted from 1988 until her death in 2007.

Macnee became a US citizen in 1959. He dictated his autobiography, which he entitled Blind in One Ear: The Avenger Returns (1988), to Marie Cameron.

Macnee co-wrote two original novels based upon The Avengers during the 1960s, titled Dead Duck and Deadline. He hosted a documentary, The Avengers: The Journey Back (1998), directed by Clyde Lucas.

While working in London on the Churchill series, Macnee was offered the part in The Avengers (1961−69), (originally intended to be known as Jonathan Steed), for which he became best known. The series was originally conceived as a vehicle for Ian Hendry, who played the lead role of Dr. David Keel in a sequel to an earlier series, Police Surgeon (1960), while John Steed was his assistant. Macnee, though, became the lead after Hendry's departure at the end of the first season. Macnee played opposite a succession of glamorous female partners; Honor Blackman, Diana Rigg, and Linda Thorson. Of the 161 completed episodes, Macnee appeared in all but two.

Macnee reunited with Diana Rigg in her short-lived NBC sitcom, Diana (1973) in a single episode. Other television appearances include a guest appearance on Columbo in the episode "Troubled Waters" (1975); and playing Major Vickers in For the Term of His Natural Life (1983). He had recurring roles in the crime series Gavilan with Robert Urich and in the short-lived satire on big Business, Empire (1984), as Dr. Calvin Cromwell. Macnee also narrated the documentary Ian Fleming: 007's Creator (2000).

Although Macnee evolved in the role as the series progressed, the key elements of Steed's persona and appearance were there from very early on: the slightly mysterious demeanour and, increasingly, the light, suave, flirting tone with ladies (and always with his female assistants). Finally, from the episodes with Blackman onwards, the trademark Bowler hat and umbrella completed the image. Though it was traditionally associated with London "city gents", the ensemble of suit, umbrella and Bowler had developed in the post-war years as mufti for ex-servicemen attending Armistice Day ceremonies. Steed's sartorial style may also have been drawn from Macnee's father. Macnee, alongside designer Pierre Cardin, adapted the look into a style all his own, and he went on to design several outfits himself for Steed based on the same basic theme. Steed was also the central character of The New Avengers (1976–77), in which he was teamed with agents named Purdey (Joanna Lumley) and Mike Gambit (Gareth Hunt).

Macnee featured prominently in two editions of the long-running British television series This Is Your Life: in 1978, when he and host Eamonn Andrews, both dressed as Steed, surprised Ian Hendry, and in 1984 when he was the edition's unsuspecting subject.

He also appeared in several cult films: in The Howling (1981), as 'Dr George Waggner' (named whimsically after the Director of The Wolf Man, 1941) and as Sir Denis Eton-Hogg in the rockumentary comedy This Is Spinal Tap (1984). He played Dr. Stark in The Creature Wasn't Nice (1981), also called Spaceship and Naked Space. Macnee played the role of actor David Mathews in the made-for-television movie Rehearsal for Murder (1982), which starred Robert Preston and Lynn Redgrave. The movie was from a script written by Columbo co-creators Richard Levinson and william Link. He took over Leo G. Carroll's role as Alexander Waverly, the head of U.N.C.L.E. in Return of the Man from U.N.C.L.E.: The Fifteen-Years-Later Affair (1983), produced by Michael Sloan. He was featured in the science fiction television movie Super Force (1990) as E. B. Hungerford (the series which followed did not feature Macnee), as a supporting character in the parody film Lobster Man From Mars (1989) as Prof. Plocostomos and in The Return of Sam McCloud (1989), a TV film, as Tom Jamison. He made an appearance in Frasier (2001), and several episodes of the American science-fiction series Nightman as Dr. Walton, a Psychiatrist who would advise Johnny/Nightman. Macnee appeared in two episodes of the series Kung Fu: The Legend Continues (1993–94) and was a retired agent in a handful of instalments of Spy Game (1997–98).

When asked in June 1982 which Avengers female lead was his favourite, Macnee declined to give a specific answer. "Well, I'd rather not say. To do so would invite trouble," he told TV Week magazine. Macnee did provide his evaluation of the female leads. Of Honor Blackman he said, "She was wonderful, presenting the concept of a strong-willed, independent and liberated woman just as that sort of woman was beginning to emerge in society." Diana Rigg was "One of the world's great actresses. A superb comedienne. I'm convinced that one day she'll be Dame Diana." (His prediction came true in 1994.) Linda Thorson was "one of the sexiest women alive" while Joanna Lumley was "superb in the role of Purdey. An Actress who is only now realising her immense potential."

Macnee's other significant roles have included playing Sir Godfrey Tibbett opposite Roger Moore in the James Bond film A View to a Kill (1985), as Major Crossley in The Sea Wolves (again with Moore), guest roles in Encounter, Alias Smith and Jones (for Glen Larson), Hart to Hart, Murder, She Wrote, and The Love Boat. Although his best known part was heroic, many of his television appearances were as villains; among them were his roles of both the demonic Count Iblis and his provision of the character voice of the Cylons' Imperious Leader in Battlestar Galactica, also for Glen Larson, for which he also supplied the show's introductory voiceover. He also presented the American paranormal series Mysteries, Magic and Miracles. Macnee made his Broadway debut as the star of Anthony Shaffer's mystery Sleuth in 1972 and subsequently headlined the national tour of that play.

Macnee featured in two pop videos: as Steed in original Avengers footage in The Pretenders' video for their song "Don't Get Me Wrong" (1986) and in the promotion for Oasis's "Don't Look Back in Anger" (1996), as the band's driver, a role similar to that which he played in the James Bond film A View To A Kill (1985). In 1990 his recording with his Avengers co-star Honor Blackman, called "Kinky Boots" (1964), reached the UK Singles Chart after being played on Simon Mayo's BBC Radio One breakfast show.

Macnee made numerous TV commercials including one around 1990 for Swiss Chalet, the Canadian restaurant chain, and a year or so before, a commercial for the Sterling Motor Car Company. Over the James Bond theme, the car duels with a motorcycle assailant at high speed through mountainous territory, ultimately eludes the foe, and reaches its destination. Macnee steps out of the car and greets viewers with a smile, saying, "I suppose you were expecting someone else". Macnee was the narrator for several "behind-the-scenes" featurettes for the James Bond series of DVDs and recorded numerous audio books, including the releases of many novels by Jack Higgins. He also recorded the children's books The Musical Life of Gustav Mole and its sequel, The Lost Music (Gustav Mole's War on Noise), both written by Michael Twinn.

For the critically lambasted film version of The Avengers (1998), he lent his voice in a cameo as "Invisible Jones". The character of Steed was taken over by Ralph Fiennes.