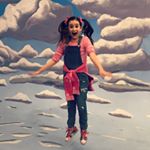 She began modeling for Ford Models when she was a couple months old.

She appeared as herself at the Disney Parks Christmas Day Parade in 2013. She was cast to star in the 2018 film Anastasia as Emma.

She has three siblings named Kylie, Brett, and Courtney. She has frequently appeared alongside them in film projects.