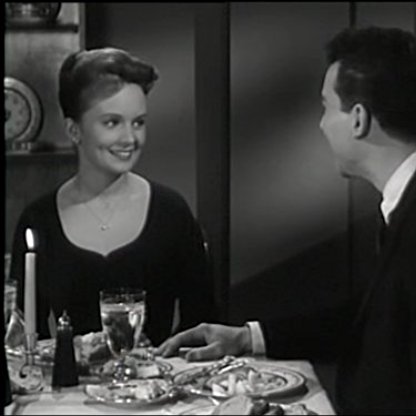 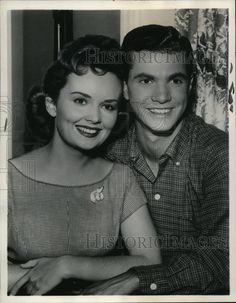 In those days they had good stories. Mary Tyler Moore said it exactly right. ‘Writing for television today is like writing shorthand. There’s no depth to anything.’ We used to have stories that had a beginning, middle, and an end; that made you feel good after watching them. Not those terrible shallow shows of today. We had stories that were genuine; stories of the West done with humor or drama and romance. A good show you looked forward to seeing. You really felt good when you saw the television shows of those days.”

A native of Ocean Falls in British Columbia,Sturgess's first credited roles were in 1955 as Kathy Gresham in the episode "Take My Hand" of the anthology television series, Studio 57, as Mia Caroll in "Time Out for Ginger" of CBS's Shower of Stars, as Midge Miller in "The Iris Miller Story" of CBS's The Millionaire, and as Linda in "Sock's Teenage Problem" of Jackie Cooper's NBC sitcom, The People's Choice. In 1957, she was cast as Mary Lambert in the episode "John Wesley Hardin" about the western outlaw on NBC's Tales of Wells Fargo, starring Dale Robertson. That same year she portrayed Fran Celane in "The Case of the Sullky Girl" on CBS's Perry Mason, with Raymond Burr.

Her film roles included that of Nancy Kettle in The Kettles in the Ozarks (1956) with Marjorie Main and Arthur Hunnicutt; Estelle Craven in The Raven (1963), with Vincent Price, Peter Lorre, Boris Karloff, and Jack Nicholson, and Bonnie Young in Requiem for a Gunfighter (1965), with Rod Cameron and Producer Alex Gordon. Sturgess recalled that Cameron, who had starred in three earlier syndicated crime series, was "making sort of a comeback at this time. He was very gracious; very kind. You can see it in him in the scene [in Requiem] when we are having dinner—his look. He was a professional. ..."

Sturgess also appeared in other ABC/WB series, Lawman, Maverick (two episodes), Bronco, Hawaiian Eye, and Sugarfoot, in the latter as Olive Turner in the 1958 episode "Short Range". In filming this episode in 1957, she reportedly developed a crush on series star Will Hutchins: “I had a mad crush on Will Hutchins. He was so handsome, so charming. I wonder why that show went off the air [in 1961] — it was good."

In 1959, she portrayed Mary MacNamara in the episode of the same name in the NBC children's western series set in a fictitious Montana town, Buckskin, with Tom Nolan. She guest-starred too in the ABC western series, Destry with John Gavin, whom Sturgess noted later went into Republican politics: "He was interesting. Such a handsome man!" She was cast too on NBC's Laramie, The Man and the Challenge, Outlaws, Wide Country, The Girl from U.N.C.L.E., and The Virginian, and CBS's Rawhide, Have Gun - Will Travel, The Texan, General Electric Theater, hosted by Ronald W. Reagan, and the detective series, Checkmate, as Felice O'Neill in the 1962 episode, "Brooding Fixation". Sturgess described Earl Holliman of The Wide Country, a western drama about rodeo riders, as "such a good actor — a very down to earth person. That’s why he goes on and on!”

Three times in 1960 and 1961, Sturgess was cast as May McBean on NBC's The Tall Man, with Barry Sullivan and Clu Gulager; May is one of the daughters of the crusty Pa McBean, played by Andy Clyde. She played Allie in the 1961 episode "Big Game Hunter" of the short-lived CBS sitcom Bringing Up Buddy, starring Frank Aletter in the title role; Diana Masters in "Shy Alfie" of CBS's The Danny Thomas Show, and Elsie Barton in "Race Against the Stork" on CBS's Petticoat Junction.

In 1965, Sturgess played a nurse on Richard Chamberlain's Dr. Kildare; her last two acting roles were also those of a nurse in Ironside with Raymond Burr in 1969 and the ABC police drama, The Rookies in 1973 and 1974.