Nithiin was born on March 30, 1983 in  Nizamabad, Telangana, India, India, is Actor, Music Department, Producer. Nithiin (born Nithin Kumar Reddy) is an Indian film actor and producer known for his works predominantly in Telugu cinema. Nithin Reddy was born to noted film producer Sudhakar Reddy, and Vindhya Reddy. He has an elder sister Nikitha Reddy. Nitin started his career with the movie Jayam in 2002 directed by Teja. He acted in the film Dil directed by V.V. Vinayak. This film is produced by Raju who got the title "Dil raju" after this film. Later in the same year Nithiin acted in the film Sambaram directed by Teja. In 2004, Nitin starred in Sri Anjaneyam directed by Krishna vamsi. Nithiin later acted in the film Sye directed by S.S. Rajamouli's in the same year which stood a block buster at the Tollywood box office.In 2012 he acted in the film Ishq, Gunde Jaari Gallanthayyinde (2013) Chinnadana Nee Kosam directed by purijaganath, Heart attack directed by Puri jaganath, Courier Boy Kalyan (2015) produced by Gautham Menon. Nithiin acted in the film A Aa in 2016 written and directed by Trivikram Srinivas The film became a biggest grosser in Nithin's career. Nithiin produced the films Gunde Jaari Gallanthayyinde and Chinnadana Nee Kosam, The film Akhil: The Power of Jua (2015)He won Filmfare Best Male Debut (South) for Jayam (2002) and Santosham Film Awards as Young best performer for the movies Sri Anjaneyam and Sye (2004).
Nithiin is a member of Actor

Nithin started his career with the movie Jayam in 2002 directed by Teja. Sadha played the female lead role and Gopi chand played the villan role in the movie. It was remade by Jayam Ravi in Tamil. In 2003, Nitin acted in the film Dil directed by V.V. Vinayak. This film is produced by Raju who got the title "Dil raju" after this film. Later in the same year Nithiin acted in the film Sambaram directed by Dasarath. K. In 2004, Nitin starred in Sri Anjaneyam directed by Krishna Vamsi. He played the role as devotee of Lord Hanuman in the movie. This is first time Nithiin dubbed his own voice for his movie, Sivaji dubbed his voice for his earlier films. Shivaji won Nandi Award for Best Male Dubbing Artist for his voice for Nithiin in the movie Dil.

From 2005 he acted in two films, Dhairyam in the direction of Teja and Allari Bullodu in direction of Raghavendra rao. He played dual role in the movie Allari Bullodu. He acquired six-pack in 2008 for this film Victory. He made his bollywood debut with Ram Gopal Varma's Agyaat in 2009. He acted in the films Takkari, Raam, Hero, Drona, Rechipo but the films were not successful at the box office.

In 2012 he acted in the film Ishq with female lead played by Nithya Menen and directed by Vikram. The music of this film was composed by Anup Rubens and Aravind Shankar. The film is produced by Nithiin's father Sudhakar Reddy and Vikram goud. Nithiin sang the song "Lachhamma" in this movie. He was Nominated for Filmfare Award for Best Actor in Telugu for Ishq. Nithiin got a success with Ishq after many years. He acted in the film Gunde Jaari Gallanthayyinde in 2013. Isha Talwar and Nithya Menen played the lead roles along with Nithin. Indian badminton player Jwala Gutta made a special appearance. Nithiin sang the song "Ding Ding Ding" along with Chaitra, Ranjith, Anup Rubens, Thagubothu Ramesh, Dhananjai in this movie. Later he acted in Chinnadana Nee Kosam film written and directed by A. Karunakaran in 2014. The film was produced by Nithin's father N. Sudhakar Reddy and sister Nikhita Reddy under their home banner Sresht Movies. In the same year he acted in the film Heart Attack directed by Puri Jagannadh. He made the role of hippie and the movie got a mixed reviews. Nithiin has planned to work again with Director Puri Jaganath but Nithiin announced that the movie is cancelled and will see to work with Puri Jaganath in Future. He acted in the role of a courier boy in the movie Courier Boy Kalyan released in 2015 directed by Premsai and produced by Gautham Menon. Nithiin acted in the film A Aa in 2016 written and directed by Trivikram Srinivas, produced by S. Radha Krishna under his banner Haarika & Haasine Creations, the female lead roles were played by Samantha Ruth Prabhu and Anupama Parameswaran. The film became the biggest grosser in Nithin's career.

He is also a brand ambassador of Cotton King — the leading chain of cotton attire for men. He has been listed as Brand Ambassadors for Swachh Bharat Campaign along with 9 other personalities for Telangana state by former Indian Union Urban Development Minister and current vice President of India M. Venkaiah Naidu in 2015. 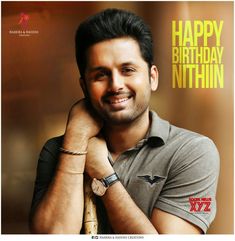 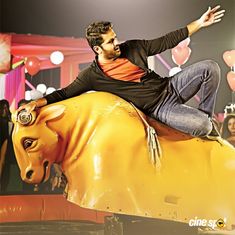