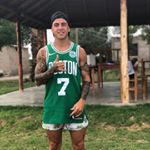 Left winger who joined Boca Juniors in 2016 and was then leant out to Huracán in 2017.

He has a son named Roman.

He and Omar Sebastian Perez both played soccer for the Boca Juniors.