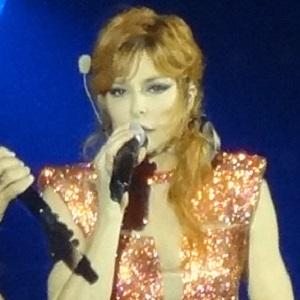 One of the most popular French recording artists in history, she released over a dozen chart-topping hits, including "Libertine," "Les Mots," and "C'est Une Belle Journee."

In the mid-1980s, she began her long-lasting collaboration with songwriter Laurent Boutonnat. She first rose to fame following the release of several controversial music videos, including "Maman a Tort" (which, ahead of its time, depicted a same-sex attraction) and "Libertine" (which was the first music video in history to include fully nude images of its lead singer).

She rose to French superstar status with the debut of her 1991 album L'Autre.

She spent her early childhood years in Quebec and, at age eight, relocated to the suburbs of Paris. Throughout her career, she was notoriously tight-lipped about her personal life.

She was born Mylene Jeanne Gautier. In her late teens, while studying drama, she changed her name to Mylene Farmer in honor of her acting idol, early 20th-century American screen star Frances Farmer.