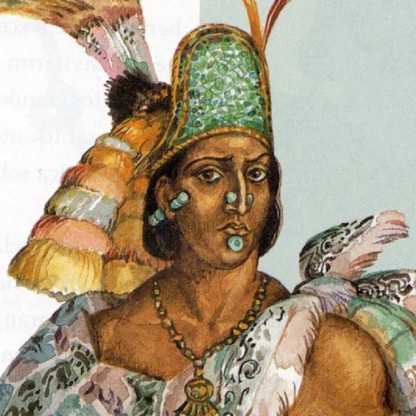 Moctezuma II was bornon 1466, is Emperor of Aztec Empire. Montezuma II (also known as Moctezuma, Moteuczoma, Motecuhzoma) was the ninth emperor of the Aztec Empire who ruled from 1502 to 1520. He greatly expanded the Aztec Empire which reached its maximum size during his reign. A brave and ambitious warrior, he undertook several military campaigns which led to the extensive expansion of his empire which grew to include the regions of Xoconosco in Chiapas and the Isthmus of Tehuantepec. He was born as the son of Axayacatl, the sixth Aztec Emperor. He was courageous from a young age and proved himself to be a valiant soldier. His uncle succeeded his father to the throne and Montezuma II played significant roles in the military campaigns launched by the emperors succeeding his father. He ascended to the throne upon the death of his uncle and became the emperor at a time when the Aztec Empire’s glory was at its zenith. He further expanded the empire and introduced several reforms in the administration. Montezuma was also highly superstitious. When Spanish Conquistador Hernán Cortés and his men reached the Aztec Empire, he warmly welcomed them believing them to be messengers of God. The Spaniards made use of the opportunity and made Montezuma II a prisoner in his own palace. The emperor died under mysterious circumstances in subsequent conflicts
Moctezuma II is a member of Historical Personalities 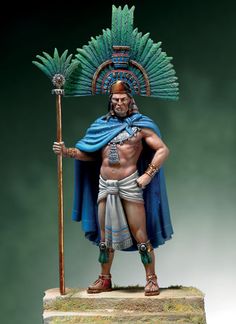 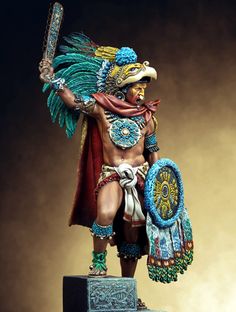 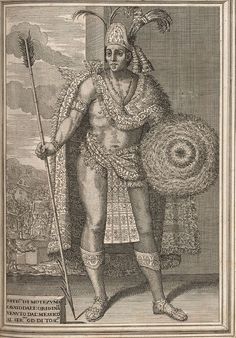 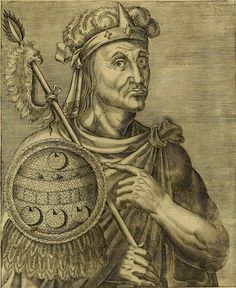 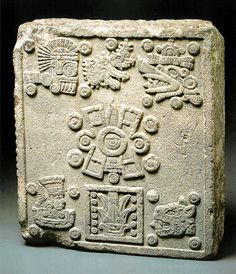 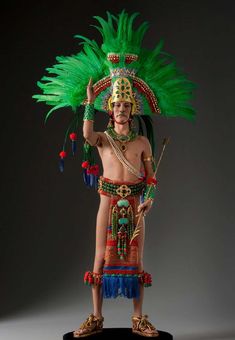 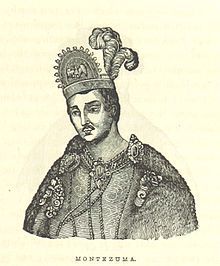 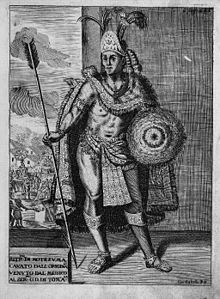 Mutezuma [sic] came to greet us and with him some two hundred lords, all barefoot and dressed in a different costume, but also very rich in their way and more so than the others. They came in two columns, pressed very close to the walls of the street, which is very wide and beautiful and so straight that you can see from one end to the other. Mutezuma came down the middle of this street with two chiefs, one on his right hand and the other on his left. And they were all dressed alike except that Mutezuma wore sandals whereas the others went barefoot; and they held his arm on either side. (Translation: Anthony Pagden 1986:84)

In 1517, Moctezuma received the first reports of Europeans landing on the east coast of his empire; this was the expedition of Juan de Grijalva who had landed on San Juan de Ulúa, which although within Totonac territory was under the auspices of the Aztec Empire. Moctezuma ordered that he be kept informed of any new sightings of foreigners at the coast and posted extra watch guards to accomplish this. (Díaz del Castillo 1963: 220).

On 8 November 1519, Moctezuma met Cortés on the causeway leading into Tenochtitlan and the two Leaders exchanged gifts. Moctezuma gave Cortés the gift of an Aztec calendar, one disc of crafted gold and another of silver. Cortés later melted these down for their material value (Díaz del Castillo 1963: 216–19).

In his Historia, Bernal Díaz del Castillo states that on 1 July 1520, the Spanish forced Moctezuma to appear on the balcony of his palace, appealing to his countrymen to retreat. The people were appalled by their emperor's complicity and pelted him with rocks and darts. He died a short time after that. Bernal Díaz gives this account:

Montezuma's Revenge is a colloquialism for traveler's diarrhea in visitors to Mexico. The urban legend states that Montezuma II initiated the onslaught of diarrhea on "gringo" travelers to Mexico in retribution for the slaughter and subsequent enslavement of the Aztec people by Hernán Cortés on Aug 13, 1521.

Following the conquest, Moctezuma's daughter, Techichpotzin (or Tecuichpoch), became known as Isabel Moctezuma. She was given a large estate by Cortés, who also fathered a child by her, Leonor Cortés Moctezuma. Isabel was married and widowed by a conquistador in Cortés's original group, Alonso Grado (died. ca. 1527) and poblador (a Spaniard who had arrived after the fall of Tenochtitlan), Pedro Gallego (died ca. 1531), and conquistador Juan Cano, who survived her.

According to Cortes, Moctezuma immediately volunteered to cede his entire realm to Charles V, King of Spain. Though some indigenous accounts written in the 1550s partly supported his words, it is still unbelievable for several reasons. As Aztec rulers spoke an overly polite language that needed translation for his subjects to understand, it is difficult to find out what Moctezuma really said. According to an indigenous account, he said to Cortes:"You have come to sit on your seat of authority, which I have kept for a while for you, where I have been in charge for you, for your agents the rulers..."However, these words might be a polite expression that was meant to convey the opposite meaning, which was Common in Nahua culture. What Moctezuma really meant could be to assert his own stature and multigenerational legitimacy. Also, according to the Spanish law, the king had no right to demand that foreign peoples become his subjects, but he had every right to bring rebels to heel. Therefore, to give the Spanish the necessary legitimacy to wage war against the indigenous people, Cortes might just had said what the Spanish king needed to hear.

When Moctezuma was allegedly killed by being stoned to death by his own people "Cortés and all of us captains and Soldiers wept for him, and there was no one among us that knew him and had dealings with him who did not mourn him as if he were our father, which was not surprising, since he was so good. It was stated that he had reigned for seventeen years, and was the best king they ever had in Mexico, and that he had personally triumphed in three wars against countries he had subjugated. I have spoken of the sorrow we all felt when we saw that Montezuma was dead. We even blamed the Mercederian friar for not having persuaded him to become a Christian." (Díaz del Castillo 1568/1963: 294)

The grandson of Moctezuma II, Pedro's son, Ihuitemotzin, baptized as Diego Luis de Moctezuma, was brought to Spain by King Philip II. There he married Francisca de la Cueva de Valenzuela. In 1627, their son Pedro Tesifón de Moctezuma was given the title Count of Moctezuma (later altered to Moctezuma de Tultengo), and thus became part of the Spanish nobility. In 1766, the holder of the title became a Grandee of Spain. In 1865, (coincidentally during the Second Mexican Empire) the title, which was held by Antonio María Moctezuma-Marcilla de Teruel y Navarro, 14th Count of Moctezuma de Tultengo, was elevated to that of a Duke, thus becoming Duke of Moctezuma, with de Tultengo again added in 1992 by Juan Carlos I.

One such Example was the rebellion of the Virgin Cult in Chiapas in 1721, where the followers of the Virgin Mary rebelled against the Spanish after having been told by an apparition of the virgin that Moctezuma would be resuscitated to assist them against their Spanish oppressors. In the Quisteil rebellion of the Yucatec Maya in 1761 the rebel leader Jacinto Canek reportedly called himself "Little Montezuma".

The Mexican Emperor is the title character in several 18th-century operas: Motezuma (1733) by Antonio Vivaldi; Motezuma (1771) by Josef Mysliveček; Montezuma (1755) by Carl Heinrich Graun; and Montesuma (1781) by Niccolò Antonio Zingarelli. He is also the subject of Roger Sessions' dodecaphonic opera Montezuma (1963), and the protagonist in the modern opera La Conquista (2005) by Italian Composer Lorenzo Ferrero, where his part is written in the Nahuatl language.

Descendants of Pedro Tesifón de Moctezuma included (through an illegitimate child of his son Diego Luis) General Jerónimo Girón-Moctezuma, 3rd Marquis de las Amarilas (1741-1819), a 9th generation descendant of Moctezuma II, who was commander of the Spanish forces at the Battle of Fort Charlotte, and his grandson, Francisco Javier Girón y Ezpeleta, 2nd es:Ducado de Ahumada and 5th marqués de las Amarillas who was the founder of the Guardia Civil in Spain.

Moctezuma (spelled Montezuma) is portrayed in Lew Wallace's first novel The Fair God (1873). He is portrayed as influenced by the belief that Cortes was Quetzalcoatl returned, and weak and indecisive, saving the conquistadores from certain defeat in one battle by ordering the Aztecs to stop.

Anthony Pagden and Eulalia Guzmán (Relaciones de Hernán Cortés 1958:279) have pointed the Biblical messages that Cortés seems to ascribe to Moctezuma's retelling of the legend of Quetzalcoatl as a vengeful Messiah who would return to rule over the Mexica. Pagden has written that "There is no preconquest tradition which places Quetzalcoatl in this role, and it seems possible therefore that it was elaborated by Sahagún and Motolinía from informants who themselves had partially lost contact with their traditional tribal histories" (Pagden 1986:467)

Montezuma is mentioned in Neil Young's song "Cortez the Killer", from the 1975 album Zuma (the title of which is also believed to have come from "Montezuma"). The Aztec empire also served as the backdrop of the song.

The Florentine Codex, made by Bernardino de Sahagún, relied on native informants from Tlatelolco, and generally portrays Tlatelolco and Tlatelolcan rulers in a favorable light relative to those of Tenochtitlan. Moctezuma in particular is depicted unfavorably as a weak-willed, superstitious, and indulgent ruler (Restall 2003). Historian James Lockhart suggests that the people needed to have a scapegoat for the Aztec defeat, and Moctezuma naturally fell into that role.

Montezuma Castle and Montezuma Well, 13th century Sinagua dwellings in central Arizona, were named by 19th century American pioneers who mistakenly thought they were built by the Aztecs.

Ethnohistorian Susan Gillespie has argued that the Nahua understanding of history as repeating itself in cycles also led to a subsequent rationalization of the events of the conquests. In this interpretation the description of Moctezuma, the final ruler of the Aztec Empire prior to the Spanish conquest, was tailored to fit the role of earlier rulers of ending dynasties—for Example Quetzalcoatl, the mythical last ruler of the Toltecs. In any case it is within the realm of possibility that the description of Moctezuma in post-conquest sources was colored by his role as a monumental closing figure of Aztec history.

Hubert Howe Bancroft, writing in the 19th century (Native Races, Volume #3), speculated that the name of the historical Aztec Emperor Moctezuma had been used to refer to a combination of different cultural heroes who were united under the name of a particularly salient representative of Mesoamerican identity.