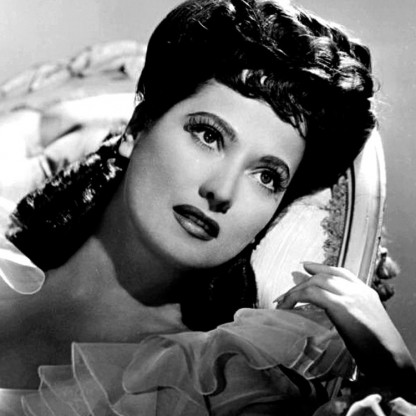 Merle Oberon was born on February 19, 1911 in Bombay, Bombay Presidency, British India, American, is Actress. Merle Oberon was a ravishing and classy Anglo-Indian actress, counted among the most dazzling performers during initial phase of talkies in the British film industry. Making her debut in films as an extra she soon made her mark in British films after being spotted by producer-director Alexander Korda and she landed doing a small but significant role of Anne Boleyn in ‘The Private Life of Henry VIII’. This was followed by another successful performance as Lady Blakeney, née Marguerite St. Just in British adventure film ‘The Scarlet Pimpernel’ directed by Harold Young. Her quick success in British films made her try her hand in the US film industry where renowned Hollywood producer Samuel Goldwyn gave her several plum roles, particularly in ‘The Dark Angel’, the performance in which fetched her ‘Academy Award for Best Actress’ nomination. She met with a potentially career-ending car accident during the making of ‘I, Claudius’ that damaged her face. However good make-up combined with careful lightning aided her in hiding the imperfections and moving on she soon mesmerised the audience with her most notable performance in ‘Wuthering Heights’, a film which was selected by ‘Library of Congress’ in 2007 for preservation in the ‘National Film Registry’ of the US, as being "culturally, historically, or aesthetically significant". All through her professional life she tried to conceal her Indian origin by contriving a story of being born in Tasmania, Australia, however a year before her death she admitted falsification.
Merle Oberon is a member of Film & Theater Personalities 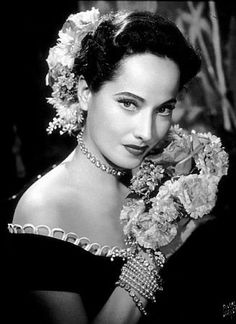 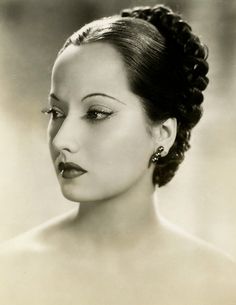 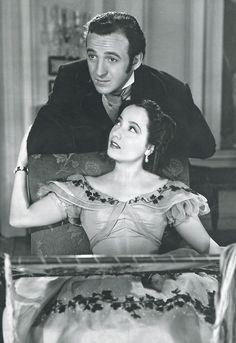 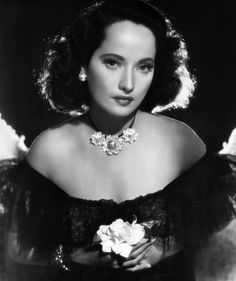 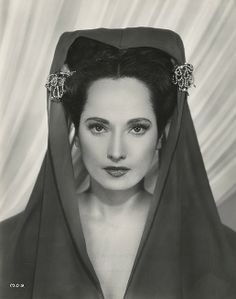 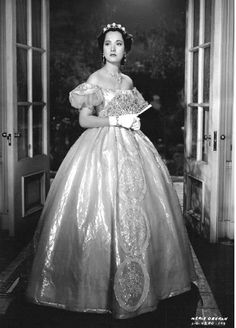 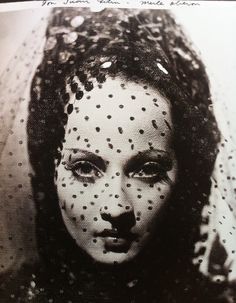 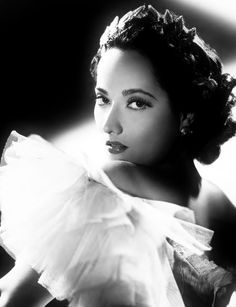 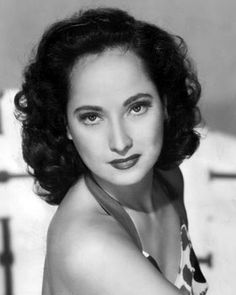 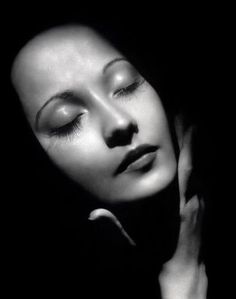 Estelle Merle O'Brien Thompson was born in Bombay (now known as Mumbai), British India on 19 February 1911. Merle was given "Queenie" as a nickname, in honour of Queen Mary, who visited India along with King George V in 1911.

In 1914, Arthur Thompson joined the British Army and later died of pneumonia on the Western Front during the Battle of the Somme. Merle, with Charlotte, led an impoverished existence in shabby flats in Bombay for a few years. Then, in 1917, they moved to better circumstances in Calcutta (now known as Kolkata) Oberon received a foundation scholarship to attend La Martiniere Calcutta for Girls, one of the best private schools in Calcutta. There, she was constantly taunted for her unconventional parentage, eventually leading her to quit school and receive lessons at home.

Oberon arrived in England for the first time in 1928, aged 17. Initially she worked as a club hostess under the name Queenie O'Brien and played in minor and unbilled roles in various films. "I couldn't dance or sing or write or paint. The only possible opening seemed to be in some line in which I could use my face. This was, in fact, no better than a hundred other faces, but it did possess a fortunately photogenic quality," she modestly told a Journalist at Film Weekly in 1939. In view of the information discovered since this 1939 article (see preceding section) this should be seen as part of a myth perpetrated by Oberon.

In 1929, Merle met a former actor named Colonel Ben Finney at Firpo's, and she dated him. However, when he saw Oberon's dark-skinned mother (actually her grandmother) one night at her flat, and realised Oberon had mixed ancestry, he decided to end the relationship. However, Finney promised to introduce her to Rex Ingram of Victorine Studios, if she was prepared to travel to France. which she readily did. After packing all their belongings and moving to France, Oberon and her mother found that their supposed benefactor avoided them, although he had left a good word for Oberon with Ingram at the studios in Nice. Ingram liked Oberon's exotic appearance and quickly hired her to be an extra in a party scene in a film named The Three Passions.

Her film career received a major boost when the Director Alexander Korda took an interest and gave her a small but prominent role, under the name Merle Oberon, as Anne Boleyn in The Private Life of Henry VIII (1933) opposite Charles Laughton. The film became a major success and she was then given leading roles, such as Lady Blakeney in The Scarlet Pimpernel (1934) with Leslie Howard, who became her lover for a while.

Merle Oberon announced an engagement to American studio executive Joseph M. Schenck in 1934. She married Director Alexander Korda in 1939. Still married, she had a brief affair in 1941 with Richard Hillary, an RAF fighter pilot who had been badly burned in the Battle of Britain. They met while he was on a goodwill tour of the United States. He later became well known as the author of a best-selling book, The Last Enemy.

Oberon's career benefited from her relationship with, and later marriage to, Korda. He sold "shares" of her contract to Producer Samuel Goldwyn, who gave her good vehicles in Hollywood. Her "mother" stayed behind in England. Oberon earned her sole Academy Award for Best Actress nomination for The Dark Angel (1935) produced by Goldwyn. Around this time she had a serious romance with David Niven, and according to one biographer even wanted to marry him, but he wasn't faithful to her.

Charlotte died in 1937. In 1949 Oberon commissioned paintings of her mother from an old photograph. The paintings hung in all her homes until Oberon's own death in 1979.

According to Princess Merle, the biography written by Charles Higham with Roy Moseley, Oberon suffered damage to her complexion in 1940 from a combination of cosmetic poisoning and an allergic reaction to sulfa drugs. Alexander Korda sent her to a skin specialist in New York City, where she underwent several dermabrasion procedures. The results, however, were only partially successful; without makeup, one could see noticeable pitting and indentation of her skin.

Oberon became Lady Korda when her husband was knighted in 1942 by George VI for his contribution to the war effort. At the time, the couple were based at Hills House in Denham, England. She divorced him in 1945, to marry Cinematographer Lucien Ballard. Ballard devised a special camera light for her to eliminate her facial scars on film. The light became known as the "Obie". She and Ballard divorced in 1949.

Oberon next married Italian-born industrialist Bruno Pagliai in 1957, adopted two children with him and lived in Cuernavaca, Morelos, Mexico. After meeting then 36-year-old Dutch actor Robert Wolders (later companion to actresses Audrey Hepburn and Leslie Caron) while they filmed Interval in 1973, Oberon divorced Pagliai and married Wolders in 1975.

Oberon is known to have been to Australia only twice. Her first visit was in 1965, on a film promotion. Although a visit to Hobart was scheduled, after journalists in Sydney pressed her for details of her early life, she became ill and shortly afterwards left for Mexico. In 1978, the year before her death, she agreed to visit Hobart for a Lord Mayoral reception. The Lord Mayor of Hobart became aware shortly before the reception that there was no proof she had been born in Tasmania, but to save face, went ahead with the reception. Shortly after arriving at the reception, Oberon, however, to the disappointment of many, denied she had been born in Tasmania. She then excused herself, claiming illness. Whether ill or not, this meant she was unavailable to answer any more questions about her background. On the way to the reception, she had told her driver that as a child she was on a ship with her Father, who became ill when it was passing Hobart. They were taken ashore so he could be treated, and as a result she spent some of her early years on the island. This story, too, seems to have been a fabrication. During her Hobart stay, she remained in her hotel, gave no other interviews, and did not visit the theatre named in her honour.

Oberon retired after Interval, and moved with Wolders to Malibu, California, where she died in 1979, aged 68, after suffering a stroke. Her body was interred at Forest Lawn Memorial Park Cemetery in Glendale, California.

When Harry Selby tracked down Merle's birth certificate in Indian government records in Bombay, he was surprised to discover he was in fact Merle's brother and not her nephew. He attempted to visit her in Los Angeles, but she refused to see him. Harry withheld this information from Oberon's biographer Charles Higham, only eventually revealing it to Maree Delofski, the creator of The Trouble with Merle, a 2002 documentary produced by the Australian Broadcasting Corporation, which investigated the various conflicting versions of Merle's origin.