Mary of Teck Net Worth

Mary of Teck was born on May 26, 1867 in Kensington Palace, London, United Kingdom, British, is Former Queen of the United Kingdom. Mary of Teck, popularly known as Queen Mary, consort of King George V, was the Queen of UK, British Dominions, and Empress of India. Though she was the princess of Teck, a castle in Wurttemberg kingdom in Germany, she was born in Kensington Palace in London and spent her entire life in England. She was given the moniker, ‘May’ as she was born in that month. She was affianced to Prince of Wales’ eldest son, Prince Albert Victor, duke of Avondale and Clarence when she was 24 years old. Unfortunately, the engagement fell through owing to the premature demise of Prince Albert from pneumonia. A year later, her betrothal was again finalized with younger brother of Albert Victor, George who afterwards was crowned as the King of England. Prior to her coronation as the Queen, she was anointed with the titles of ‘Duchess of York’, ‘Princess of Wales’ and ‘Duchess of Cornwall’. Following the coronation of George V as King of England, she automatically became the Queen consort, assisting her husband in fulfilling his official duties. When Edward, her eldest son became the king after George V died, she fulfilled the role of Queen mother. When Edward VIII renounced the throne, his younger brother Albert wore the crown as King George VI. Mary of Teck passed away at 85, shortly before Queen Elizabeth II’s crowning.
Mary of Teck is a member of Historical Personalities

Some Mary of Teck images 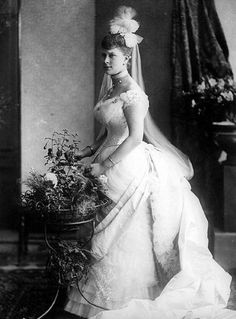 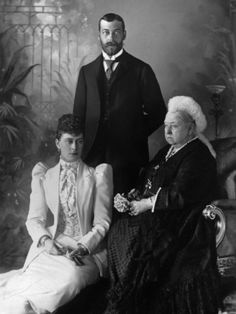 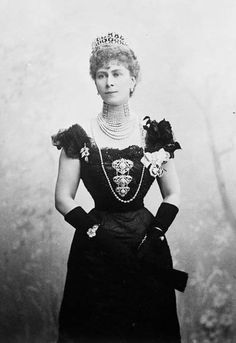 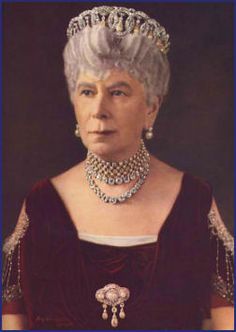 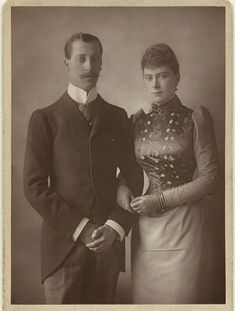 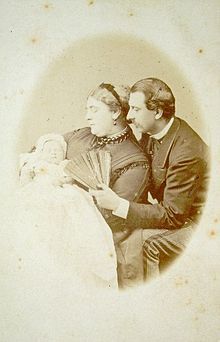 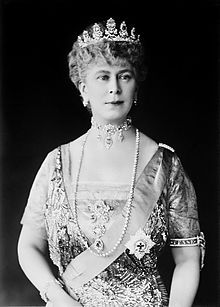 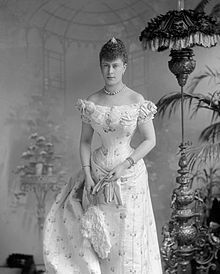 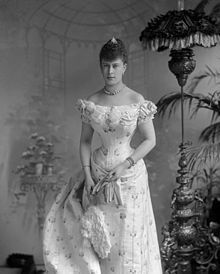 Princess Victoria Mary ("May") of Teck was born on 26 May 1867 at Kensington Palace, London. May's father was Prince Francis, Duke of Teck, the son of Duke Alexander of Württemberg by his morganatic wife, Countess Claudine Rhédey von Kis-Rhéde (created Countess von Hohenstein in the Austrian Empire). May's mother was Princess Mary Adelaide of Cambridge, the third child and younger daughter of Prince Adolphus, Duke of Cambridge, and Princess Augusta of Hesse-Kassel. She was baptised in the Chapel Royal of Kensington Palace on 27 July 1867 by Charles Thomas Longley, Archbishop of Canterbury. Before she became queen, she was known to her family, friends and the public by the diminutive name of "May", after her birth month.

Although her mother was a grandchild of King George III, May was only a minor member of the British royal family. Her father, the Duke of Teck, had no inheritance or wealth and carried the lower royal style of Serene Highness because his parents' marriage was morganatic. However, the Duchess of Teck was granted a parliamentary annuity of £5,000 and received about £4,000 a year from her mother, the Duchess of Cambridge. Despite this, the family was deeply in debt and lived abroad from 1883, in order to economise. The Tecks travelled throughout Europe, visiting their various relations. They stayed in Florence, Italy, for a time, where May enjoyed visiting the art galleries, churches, and museums.

In 1885, the Tecks returned to London, and took up residence at White Lodge, in Richmond Park. May was close to her mother, and acted as an unofficial secretary, helping to organise parties and social events. She was also close to her aunt, the Grand Duchess of Mecklenburg-Strelitz, and wrote to her every week. During the First World War, the Crown Princess of Sweden helped pass letters from May to her aunt, who lived in enemy territory in Germany until her death in 1916.

In December 1891, May was engaged to her second cousin once removed, Prince Albert Victor, Duke of Clarence and Avondale, the eldest son of the Prince of Wales. The choice of May as bride for the Duke owed much to Queen Victoria's fondness for her, as well as to her strong character and sense of duty. However, Albert Victor died six weeks later, in a recurrence of the worldwide 1889–90 influenza pandemic.

May married Prince George, Duke of York, in London on 6 July 1893 at the Chapel Royal, St James's Palace. The new Duke and Duchess of York lived in York Cottage on the Sandringham Estate in Norfolk, and in apartments in St James's Palace. York Cottage was a modest house for royalty, but it was a favourite of George, who liked a relatively simple life. They had six children: Edward, Albert, Mary, Henry, George, and John.

As Duke and Duchess of York, George and May carried out a variety of public duties. In 1897, she became the patron of the London Needlework Guild in succession to her mother. The guild, initially established as The London Guild in 1882, was renamed several times and was named after May between 1914 and 2010. Samples of her own embroidery range from chair seats to tea cosies.

On 9 November 1901, nine days after arriving back in Britain and on the King's sixtieth birthday, George was created Prince of Wales. The family moved their London residence from St James's Palace to Marlborough House. As Princess of Wales, May accompanied her husband on trips to Austria-Hungary and Württemberg in 1904. The following year, she gave birth to her last child, John. It was a difficult labour, and although she recovered quickly, her newborn son suffered respiratory problems.

From October 1905 the Prince and Princess of Wales undertook another eight-month tour, this time of India, and the children were once again left in the care of their grandparents. They passed through Egypt both ways and on the way back stopped in Greece. The tour was almost immediately followed by a trip to Spain for the wedding of King Alfonso XIII to Victoria Eugenie of Battenberg, at which the bride and groom narrowly avoided assassination. Only a week after returning to Britain, May and George went to Norway for the coronation of George's brother-in-law and sister, King Haakon VII and Queen Maud.

On 6 May 1910, Edward VII died. Mary's husband ascended the throne and she became queen consort. When her husband asked her to drop one of her two official names, Victoria Mary, she chose to be called Mary, preferring not to be known by the same style as her husband's grandmother, Queen Victoria. Queen Mary was crowned with the King on 22 June 1911 at Westminster Abbey. Later in the year, the new King and Queen travelled to India for the Delhi Durbar held on 12 December 1911, and toured the sub-continent as Emperor and Empress of India, returning to Britain in February. The beginning of Mary's period as consort brought her into conflict with her mother-in-law, Queen Alexandra. Although the two were on friendly terms, Alexandra could be stubborn; she demanded precedence over Mary at the funeral of Edward VII, was slow in leaving Buckingham Palace, and kept some of the royal jewels that should have been passed to the new queen.

During the First World War, Queen Mary instituted an austerity drive at the palace, where she rationed food, and visited wounded and dying servicemen in hospital, which caused her great emotional strain. After three years of war against Germany, and with anti-German feeling in Britain running high, the Russian Imperial Family, which had been deposed by a revolutionary government, was refused asylum, possibly in part because the Tsar's wife was German-born. News of the Tsar's abdication provided a boost to those in Britain who wished to replace their own monarchy with a republic. The war ended in 1918 with the defeat of Germany and the abdication and exile of the Kaiser.

In the late 1920s, George V became increasingly ill with lung problems, exacerbated by his heavy smoking. Queen Mary paid particular attention to his care. During his illness in 1928, one of his doctors, Sir Farquhar Buzzard, was asked who had saved the King's life. He replied, "The Queen". In 1935, King George V and Queen Mary celebrated their silver Jubilee, with celebrations taking place throughout the British Empire. In his Jubilee speech, George paid public tribute to his wife, having told his speechwriter, "Put that paragraph at the very end. I cannot trust myself to speak of the Queen when I think of all I owe her."

Mary was an eager collector of objects and pictures with a royal connection. She paid above-market estimates when purchasing jewels from the estate of Dowager Empress Marie of Russia and paid almost three times the estimate when buying the family's Cambridge Emeralds from Lady Kilmorey, the mistress of her late brother Prince Francis. In 1924, the famous Architect Sir Edwin Lutyens created Queen Mary's Dolls' House for her collection of miniature pieces. Indeed, she has sometimes been criticised for her aggressive acquisition of objets d'art for the Royal Collection. On several occasions, she would express to hosts, or others, that she admired something they had in their possession, in the expectation that the owner would be willing to donate it. Her extensive knowledge of, and research into, the Royal Collection helped in identifying artefacts and artwork that had gone astray over the years. The royal family had lent out many objects over previous generations. Once she had identified unreturned items through old inventories, she would write to the holders, requesting that they be returned.

George V died on 20 January 1936, after his physician, Lord Dawson of Penn, gave him an injection of morphine and cocaine that may have hastened his death. Queen Mary's eldest son ascended the throne as Edward VIII. She was now the queen mother, though she did not use that style, and was instead known as Her Majesty Queen Mary.

During the Second World War, George VI wished his mother to be evacuated from London. Although she was reluctant, she decided to live at Badminton House, Gloucestershire, with her niece, Mary Somerset, Duchess of Beaufort, the daughter of her brother Lord Cambridge. Her personal belongings were transported from London in seventy pieces of luggage. Her household, which comprised fifty-five servants, occupied most of the house, except for the Duke and Duchess's private suites, until after the war. The only people to complain about the arrangements were the royal servants, who found the house too small, though Queen Mary annoyed her niece by having the ancient ivy torn from the walls as she considered it unattractive and a hazard. From Badminton, in support of the war effort, she visited troops and factories and directed the gathering of scrap materials. She was known to offer lifts to Soldiers she spotted on the roads. In 1942, her youngest surviving son, Prince George, Duke of Kent, was killed in an air crash while on active Service. Mary finally returned to Marlborough House in June 1945, after the war in Europe had resulted in the defeat of Nazi Germany.

In 1952, King George VI died, the third of Queen Mary's children to predecease her; her eldest granddaughter, Princess Elizabeth, ascended the throne as Queen Elizabeth II. The death of a third child profoundly affected her. Mary remarked to Princess Marie Louise: "I have lost three sons through death, but I have never been privileged to be there to say a last farewell to them." Mary died the next year on 24 March 1953 at the age of 85, only ten weeks before her granddaughter's coronation. Mary let it be known that, in the event of her death, the coronation was not to be postponed. Her remains lay in state at Westminster Hall, where large numbers of mourners filed past her coffin. She is buried beside her husband in the nave of St George's Chapel, Windsor Castle.

Queen Mary's arms were the royal coat of arms of the United Kingdom impaled with her family arms – the arms of her grandfather, Prince Adolphus, Duke of Cambridge, in the 1st and 4th quarters, and the arms of her father, Prince Francis, Duke of Teck, in the 2nd and 3rd quarters. The shield is surmounted by the imperial crown, and supported by the crowned lion of England and "a stag Proper" as in the arms of Württemberg.