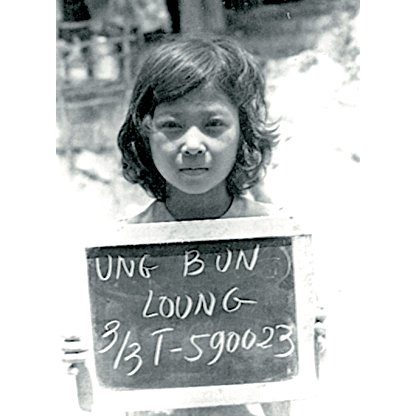 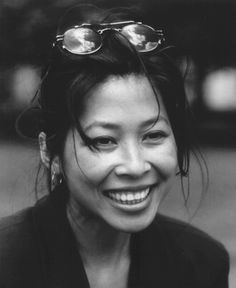 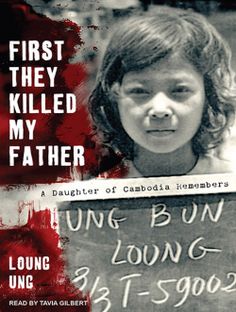 Loung Ung (Khmer: អ៊ឹង លឿង Aung Lueng; born April 17, 1970) is a Cambodian-born American human-rights Activist and lecturer. She is the national spokesperson for the Campaign for a Landmine-Free World. Between 1997 and 2003, she served in the same capacity for the "International Campaign to Ban Landmines", which is affiliated with the Vietnam Veterans of America Foundation.

There is a picture in First They Killed My Father that was supposedly taken "on a family trip to Angkor Wat" in 1973 or 1974. A civil war had been in progress in Cambodia since 1970 and the Khmer Rouge was in control of Siem Reap (the location of Angkor Wat) from 1973 onward. Critics state that it is not likely that Ung's family would be vacationing at that time in that region of Cambodia, that the picture was taken at Wat Phnom, which is in Phnom Penh, the capital of Cambodia, and that Ung's memory is therefore unreliable.

Ung's father was born in the small village of Tro Nuon in Kampong Cham province in 1931. Her mother was from China and moved with her family to Cambodia when she was a little girl. They married against her family's wishes, and eventually came to live with their children in a third-floor apartment in the center of the bustling capital city of Phnom Penh. Due to his record of Service in the previous government of Prince Norodom Sihanouk, Ung's father was conscripted into the government of Lon Nol, and became a high-ranking military police officer. Ung's mother supported her family as a homemaker. The family was relatively well-off and owned two cars and a truck, and their house used running water, a flushable toilet, and an iron bathtub. They also had telephones as well as the daily services of a maid, and often enjoyed films at the nearby theater and swimming in the pool at a local club. By her own account, Loung lived a happy and carefree life in a close-knit loving family, until April 17, 1975, when the Khmer Rouge gained control of Cambodia and evacuated Phnom Penh.

Ro Leap was Ung's home for the next eighteen months. Cut off from all outside communication and constantly in fear of Soldiers who patrolled the village, the Ungs were forced by the Khmer Rouge to work long hours with very little food. Near-starvation and physical exhaustion became a way of life. A few months after their arrival, Loung's oldest brothers, eighteen-year-old Meng and sixteen-year-old Khouy, and her oldest sister, fourteen-year-old Keav, were sent away to work in different camps. Six months later, in August 1976, Keav died of food poisoning at the teenagers’ work camp at Kong Cha Lat. In December, two Soldiers came to the Ungs' hut and demanded the help of Loung's father to free a stuck wagon; he was never seen or heard from again.

Loung and her brother, eleven-year-old Kim, and her two sisters, nine-year-old Chou and four-year-old Geak, remained in Ro Leap with their mother until May 1977. During this time, they avoided starvation with the help of Meng and Khouy, who brought them what little food they could from their work camp, and by Kim, who risked his life late at night by stealing corn from the crops guarded by the Soldiers. In May, agitated by screams in the night and the sudden disappearance of a neighboring family, Ay Ung sent Kim, Chou, and Loung away from Ro Leap with instructions to pretend they were orphans and never to come back. Kim separated from his sisters, while Loung and Chou found a nearby children's work camp where their guise as orphans was accepted. In time, Loung and Chou gained strength with improved food rationing, and in August 1977, Loung, now seven years old, was assigned to a training camp for child Soldiers, and was forced to leave her sister Chou behind.

For the following seventeen months, Loung Ung learned how to fight the Vietnamese Soldiers. In November 1978, she left her camp under cover of night without permission, and returned to Ro Leap to see her mother and sister. Upon arriving, she found the hut empty, although her mother's belongings were still there. The woman in the neighboring hut told her that Ay and Geak had been taken away by the Soldiers. They also were never seen again.

In March 1979, Meng and Khouy, both of whom had also escaped their camps when the Vietnamese invaded, arrived at Pursat City. In April, the reunited Ungs set out on an eighteen-day trek to Bat Deng, where they stayed with their uncle Leang and his family. During this time Meng married Eang, a twenty-year-old Chinese girl who was separated from her family, in a ceremony arranged by Loung's uncle and aunt. In time, they learned that Eang's mother and father were safe in Vietnam, and Meng and Eang went to see them. With their aid, Meng and Eang devised a plan to get to Thailand via Vietnam, and then, they hoped, to the United States. Meng returned alone to Bat Deng. With limited resources, he could afford to take only one family member with him back to Vietnam; he chose Loung.

In October, Loung and Meng were smuggled into Vietnam via a fishing boat, and stayed with Eang and her family. In December, Loung, Meng, and Eang moved to a houseboat in Long Deang in preparation for their prearranged escape to Thailand. In February 1980, after a perilous three-day voyage across the Gulf of Thailand in the hands of paid professionals, they arrived at the Lam Sing refugee camp on the coast of Thailand. Among the thousands of refugees who were waiting for sponsorship to go to another country, the Ungs waited four months in Lam Sing before they found out that the U.S. Conference of Catholic Bishops and the Holy Family Church in Essex Junction, Vermont, would be their sponsors. In the middle of June 1980, Loung, Meng, and Eang boarded a plane at Bangkok International Airport and headed for their new home.

In 1983, Loung entered the ADL Intermediate School, and continued with English language learning and teaching (ESL) sessions. Meng and Eang both found employment with IBM on the evening shift, and Loung, now thirteen years old, cared for Maria after school until they returned home late at night. Meng sent money and packages, via the Asian community in Montreal, Quebec, Canada, to his family in Cambodia as often as he could throughout the 1980s; some packages either did not arrive, or arrived with some of the contents missing. In 1985, Eang gave birth to her second daughter, Victoria, and Loung entered Essex Junction High School as a freshman. A few months later, Meng and Eang were sworn in as naturalized citizens of the United States. In early 1986, the Ungs moved, with the help of their sponsors, into their own modest two-story home in a nearby neighborhood, and Loung, now nearly sixteen years old, delighted in having her own personal room.

In 1989, Loung graduated from high school, and in the fall, she entered Saint Michael's College with the financial assistance of a full four-year scholarship provided by the Turrell Scholarship Fund. During her college years, she made a conscious decision to become an Activist, and met her Future husband. In early 1992, Loung studied at Cannes International College as part of Saint Michael's curriculum. During that time, she was reunited with her youngest brother Kim, who had fled Cambodia to Thailand and was brought to France via Germany with the help of his Aunt Heng in 1985. In 1993, Loung graduated from Saint Michael’s College with an undergraduate degree, and found work as a community educator at a shelter for abused women in Lewiston, Maine.

In 1995, Ung traveled back to Cambodia for the first time since she had fled fifteen years earlier. During this visit, she and Meng and his family reconnected with the family they had left behind, and learned of the murders of many of their relatives during the Khmer Rouge reign. Some time after returning to the U.S., Ung left Maine and moved to Washington, D.C., and in late 1996, joined the Vietnam Veterans of America Foundation (VVAF), an international humanitarian organization that provides physical rehabilitation clinics, prostheses, and mobility devices free of charge in many countries and in several provinces in Cambodia. In 1997, she was awarded a Herbert Scoville Jr. Peace Fellowship, where she worked at the Peace Action Education Fund researching weapons trafficking and landmine legislation. In 2005, Loung made her twenty-fifth trip to Cambodia as the VVAF's spokesperson for the "International Campaign to Ban Landmines". The VVAF has, since 1991, fitted more than 15,000 victims with the means to walk and enjoy a better quality of life. Bobby Muller, chairman of the foundation, has remarked that "...what comes out [when Loung lectures] is just staggering. It rocks people. She's the best thing this organization has ever had to advance our agenda". The campaign won the Nobel Peace Prize in 1997.

Loung, Meng and Kim returned to Bat Deng in 1998 for a large family reunion with Khouy, Chou and all their relatives, including their 88-year-old grandmother. The Ungs arranged a Buddhist ceremony to honor their parents, Sem and Ay, and their sisters, Keav and Geak, who had all died at the hands of the Khmer Rouge regime; the Service was attended by many hundreds of relatives and friends. Two years later, her first memoir was published. In 2002, Loung married her college sweetheart, Mark Priemer, and bought two and a half acres of land in Cambodia just a short distance from her sister Chou's home. During commencement ceremonies at Saint Michael's College in May 2002, Loung was inducted into the inaugural class of the college's Alumnae Academic Hall of Fame: "Saint Michael's is proud beyond measure to honor its 1993 graduate, Loung Ung". In 2003, she was chosen by Saint Michael's to address the graduating class. Her second memoir was published in 2005.

In December 2000, Ung responded to the earliest of these criticisms.

The following is an excerpt from the article "Cambodian refugee had new difficulties after move to U.S.", published by the Nashua Telegraph on Sunday, April 17, 2005.

"Ung recently moved to suburban Cleveland where her husband grew up. He knows, though, that someday he'll probably be living in Cambodia where Ung owns 2½ acres and plans to build a home. For now, she keeps plenty of reminders of the country in her fourth-floor home office — a statue of Buddha, a photograph of a palm tree and rice field that she feels captures the country's beauty. Her office overlooks a wood deck that has been painted rusty red to remind her of the soil of her native home. She's working on her first novel, set in 1148 in Cambodia. She's shy about revealing the plot. Again, she's sure it will only sell 10 copies."