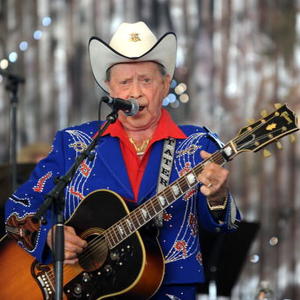 He started as a member of the Grand Ole Opry in 1948 and became a member of the Country Music Hall of Fame in 1983. He was born as James Cecil Dickens in Bolt, West Virginia in 1920. He began his musical career in the late 1930s, performing on a local radio station while attending West Virginia University. He soon quit school to pursue a full-time music career, and travelled the country performing on various local radio stations under the name "Jimmy the Kid." Dickens recorded many novelty songs for Columbia, including "Country Boy," "A-Sleeping at the Foot of the Bed" and "I'm Little But I'm Loud." His song "Take an Old Cold Tater (And Wait)" inspired Hank Williams to nickname him "Tater".  In 1962, Dickens scored his first top-10 country hit since 1954 with "The Violet and the Rose".

In 1964, Dickens became the first country artist to circle the globe while on tour, and also made numerous TV appearances including The Tonight Show Starring Johnny Carson. In 1965, he released his biggest hit, "May the Bird of Paradise Fly Up Your Nose," reaching No. 1 on the country chart and No. 15 on the pop chart. In recent years, Dickens has made appearances in a number of music videos by fellow country musician and West Virginia native, Brad Paisley. He has also been featured on several of Paisley's albums in bonus comedy tracks along with other Opry mainstays such as George Jones and Bill Anderson. They are collectively referred to as the Kung-Pao Buckaroos. With the passing of Hank Locklin in March 2009, Dickens became the oldest living member of the Grand Ole Opry at the age of 90. Dickens recalls fondly the late Minnie Pearl, who helped him hone the comic timing on the jokes that pepper his performances. One of his most memorable Opry moments was the night he introduced Bob Hope. He spends his days at his Brentwood, Tennessee home with his wife, Mona, where the couple enjoy working in their expansive garden in the warm months.