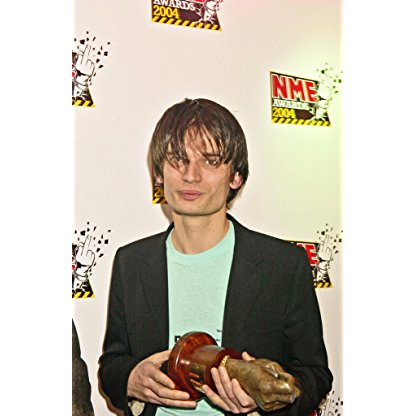 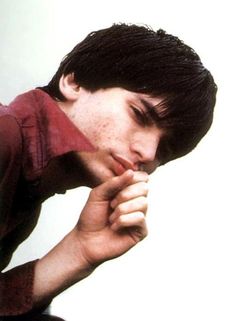 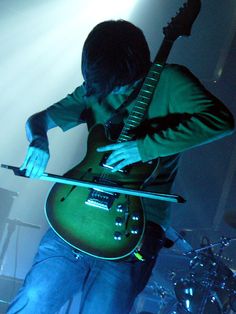 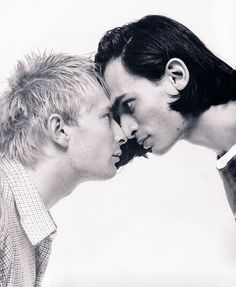 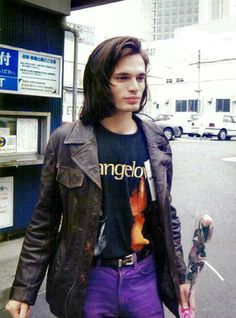 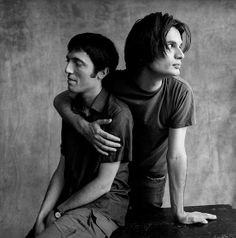 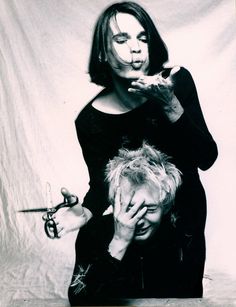 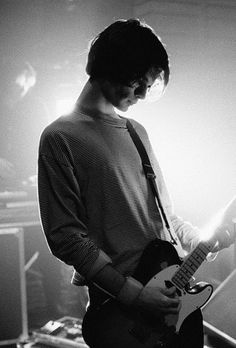 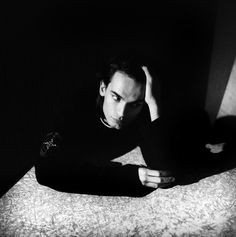 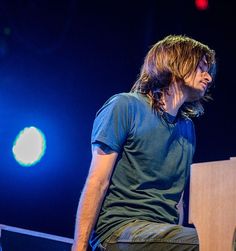 For his film soundtracks, Greenwood attempts to keep the instrumentation contemporary to the period of the story; for Example, he recorded the Norwegian Wood Soundtrack using a 1960s Japanese nylon-strung guitar and recorded it with period home recording equipment, attempting to create a recording that one of the characters might have made. Many of his compositions are microtonal.

Jonny Greenwood was born on 5 November 1971 in Oxford, England. His brother, Radiohead Bassist Colin Greenwood, is two years older than him. His father served in the army as a bomb-disposal expert. When he was a child, Greenwood's family would Listen to a small number of cassettes in their car, including Mozart’s horn concertos, the musicals Flower Drum Song and My Fair Lady, and cover versions of Simon and Garfunkel songs. When the cassettes were not playing, Greenwood would Listen to the noise of the engine and try to recall every detail of the music. He credited his older siblings with exposing him to rock bands such as The Beat and New Order.

The first gig Greenwood attended was The Fall, on their 1988 Frenz Experiment tour, which he found "overwhelming". He also spent time computer programming as a child, experimenting with BASIC and simple machine code to build what he called "rubbishy computer games". According to Greenwood, "the closer I got to the bare bones of the computer, the more exciting I found it."

Greenwood has long used a rewired Fender Telecaster Plus with Lace Sensor pickups; his other guitars include a mid-seventies Fender Starcaster and a Gibson Les Paul. He is known for his aggressive playing style; in the 1990s, his playing gave him repetitive stress injury, necessitating a brace on his right arm, which he likened to "taping up your fingers before a boxing match." He often uses effect pedals and sometimes plays with a violin bow. He dislikes the reputation of guitars as something to be "admired or worshipped", saying he sees them as a tool like a typewriter or a vacuum cleaner.

In 1991, Greenwood was three weeks into a degree in music and psychology at Oxford Brookes University when On a Friday signed a recording contract with EMI. He dropped out of university, and On a Friday changed their name to Radiohead. The band found early success with their 1992 single "Creep". According to Rolling Stone, "It was Greenwood's gnashing noise blasts that marked Radiohead as more than just another mopey band ... an early indicator of his crucial role in pushing his band forward." Greenwood wrote his first Radiohead string part for the middle eight of "My Iron Lung", which appeared on their second album, The Bends (1995). Radiohead's third album, OK Computer (1997), propelled them to widespread acclaim, showcasing Greenwood's lead guitar work on songs such as "Paranoid Android". For the track "Climbing up the Walls", Greenwood wrote a part for 16 stringed instruments playing quarter tones apart, inspired by the Polish Composer Krzysztof Penderecki.

Greenwood played harmonica on Blind Mr. Jones's 1992 single "Crazy Jazz". For the 1998 film Velvet Goldmine, he formed Venus in Furs with Radiohead's Thom Yorke, Suede's Bernard Butler, and Roxy Music's Andy Mackay and recorded covers of the Roxy Music songs "2HB", "Ladytron" and "Bitter-Sweet". Greenwood played harmonica on the tracks "Platform Blues" and "Billie" on Pavement's final album, Terror Twilight (1999), produced by Nigel Godrich. He played guitar on Bryan Ferry's albums Frantic (2002) and Olympia (2010). In 2004, he and Yorke contributed to the Band Aid 20 single "Do They Know It's Christmas?", produced by Godrich.

In 1995 Greenwood married the Israeli-born visual Artist Sharona Katan; her work (credited as Shin Katan) appears on the covers of Greenwood's Bodysong and There Will be Blood soundtracks. Their first son, Tamir, was born in 2002; the album Radiohead released the following year, Hail to the Thief, was dedicated to him. Their daughter, Omri, was born in 2005, and a second son, Zohar, was born in February 2008.

Radiohead's fourth and fifth albums, Kid A (2000) and Amnesiac (2001), recorded simultaneously, marked a dramatic change in sound, incorporating influences from electronic and classical music, as well as jazz and krautrock. Greenwood employed a modular synthesiser to build the drum machine rhythm of "Idioteque", and played an ondes Martenot, an early synthesiser similar to a theremin. The albums also gave Greenwood the opportunity to work with the Orchestra of St John's. Greenwood composed a string arrangement for the track "How to Disappear Completely" by multitracking his ondes Martenot playing. According to longtime Radiohead Producer Nigel Godrich, when the Musicians saw Greenwood's score "they all just sort of burst into giggles, because they couldn’t do what he’d written, because it was impossible—or impossible for them, anyway." The orchestra leader John Lubbock encouraged the Musicians to experiment and work with Greenwood's "naive" ideas.

In 2003, Greenwood released his first solo work, Bodysong, the Soundtrack for the documentary of the same name, featuring Colin Greenwood on bass. The Soundtrack incorporates guitar, classical music, and jazz. In March 2004, Greenwood's first work for orchestra, Smear, was premiered by the London Sinfonietta. In May, he was appointed composer-in-residence to the BBC Concert Orchestra, for whom he wrote "Popcorn Superhet Receiver" (2005), which won the Radio 3 Listeners' Award at the 2006 BBC British Composer Awards. The piece was inspired by radio static and the elaborate, dissonant tone clusters of Penderecki's Threnody to the Victims of Hiroshima (1960). He wrote the piece by recording individual tones on viola, then manipulating and overdubbing them in Pro Tools. As part of his prize Greenwood received £10,000 from the PRS Foundation towards a commission for a new orchestral work.

Greenwood is a fan of the 80s post-punk band Magazine. He declined an offer to fill in for Guitarist John McGeoch, who died in 2004, during the band's 2012 reunion tour. According to Radiohead collaborator Adam Buxton, "I think Jonny was just overwhelmed, cause he's the biggest Magazine fan in the world. He was just too shy, I think. I'm sure he's got all those licks in his locker."

For the 2005 film Harry Potter and the Goblet of Fire, Greenwood appeared as part of the wizard rock band Weird Sisters with Radiohead Drummer Phil Selway, former Pulp members Jarvis Cocker and Steve Mackey, electronica Artist Jason Buckle and Add N to (X) member Steven Claydon. In 2008, Greenwood collaborated with Israeli rock musician Dudu Tasa on the Hebrew-language single "What a Day". In 2011, he and Yorke collaborated with Rapper MF Doom on the track "Retarded Fren".

Greenwood curated a compilation album of reggae tracks, Jonny Greenwood Is the Controller, released by Trojan Records in March 2007. The album features mostly 70s roots and dub tracks from artists including Lee "Scratch" Perry, Joe Gibbs, and Linval Thompson; the title references Thompson's track "Dread Are the Controller". In 2008, Greenwood wrote the title music for Adam Buxton's Sketch show pilot meeBOX. In February 2010, he debuted a new composition, "Doghouse", at the BBC's Maida Vale Studios. Greenwood wrote the piece in hotels and dressing rooms while on tour with Radiohead. He expanded "Doghouse" into the score for the Japanese film Norwegian Wood released later that year, based on the novel of the same name by Haruki Murakami.

In 2010, the NME named Greenwood one of the greatest living guitarists. In the same year, he was voted the seventh greatest Guitarist of all time in a poll of more than 30,000 BBC Radio 6 Music listeners. In 2011, Rolling Stone ranked him the 48th greatest Guitarist of all time, and in 2012 Spin ranked him the 29th. In 2008, Greenwood's guitar solo in "Paranoid Android" was named the 34th best guitar solo of all time by Guitar World. His solos in "Paranoid Android", "Just" and "The Bends" appeared in the NME's 2012 list of the best guitar solos of all time.

Greenwood is a prominent player of the ondes Martenot, an early electronic instrument played by moving a ring along a wire, creating sounds similar to a theremin. The instrument appears on tracks such as "How to Disappear Completely" (from Kid A) and "Where I End and You Begin" (from Hail to the Thief). Greenwood became interested in the instrument at the age of 15 after hearing Olivier Messiaen's Turangalîla Symphony. He is interviewed by Suzanne Binet-Audet about his affection for the instrument in the 2012 documentary Wavemakers. As original production of the ondes Martenot ceased in 1988, Greenwood had a replica created to take on tour with Radiohead in 2001 for fear of damaging his original model.

Greenwood first heard Olivier Messiaen's Turangalîla Symphony at the age of 15 and became "round-the-bend-obsessed with it". Messiaen was Greenwood's "first connection" to classical music, and remains an influence; he said: "He was still alive when I was 15, and for whatever reason I felt I could equate him with my other favourite bands – there was no big posthumous reputation to put me off. So I'm still very fond of writing things in the same modes of limited transposition that he used."

In 2014, Greenwood wrote of his fascination with Indian instruments, particularly the tanpura: "Supposedly they’re just drones to accompany Singers but in fact they produce a compellingly complex wall of sound, with layer upon layer of drifting harmonics. I’ve started using some of these instruments in my music because I can’t think of any other way, electronics included, of making such sounds."

Greenwood's first instrument was a recorder given to him at age four or five. He took the instrument seriously, playing it into adulthood, and played baroque music in recorder groups as a teenager. He also learnt the viola and joined the Thames Vale Youth Orchestra, which he described as a formative experience: "I'd been in school orchestras and never seen the point. But in Thames Vale I was suddenly with all these 18-year-olds who could actually play in tune. I remember thinking: 'Ah, that’s what an orchestra is supposed to sound like!'"