Jodi Huisentruit was born on June 05, 1968 in Long Prairie, Minnesota, United States, United States, is News Anchor. Jodi Huisentruit was an American TV news correspondent, who worked for KIMT news channel. Jodi went missing in 1995 and the case is still unsolved. Her disappearance garnered the attention of many as she vanished without a trace. This case was never solved and the investigation is still on. The case was handled by various departments including the Mason City Police, Iowa Division of Criminal Investigation and FBI, but none could trace Jodi’s whereabouts. The case is known as the most mysterious disappearance case in the history of Iowa and has been featured in several talk shows, including ‘America’s Most Wanted’, ‘Unsolved Mysteries’, ‘20/20’, ‘Nancy Grace’, ‘Psychic Detectives’ and numerous other shows. No one has ever been charged for abducting her. Jodi was officially declared dead in May 2001. However, neither her body nor any trace of her being dead has ever been retrieved.
Jodi Huisentruit is a member of TV Anchors 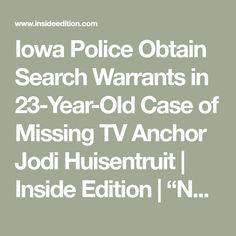 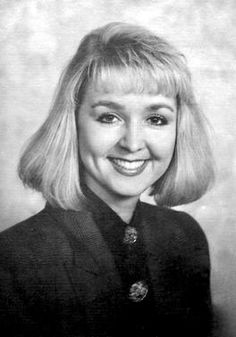 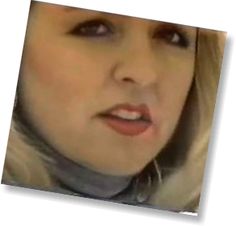 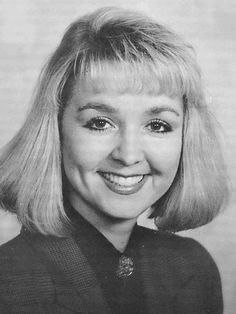 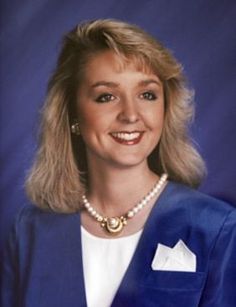 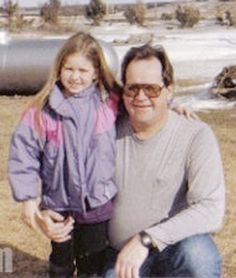 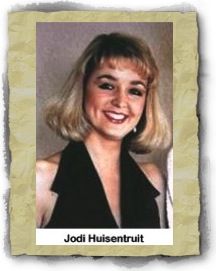 Huisentruit was born in and grew up in Long Prairie, Minnesota, the youngest daughter of Maurice Nicholas Huisentruit (1920–1982) and Imogene L. "Jane" Huisentruit (née Anderson, 1923–2014). In high school, she was considered to be very good at golf. Her team won the state Class A tournament in 1985 and 1986. After high school, she went on to St. Cloud State University, where she studied mass communications and speech communication and graduated with a Bachelor's degree in 1990. Her first job after graduation was with North West Airlines. She entered broadcasting by getting a job at KGAN in Cedar Rapids, Iowa, as the station's Iowa City bureau chief, then returned to Minnesota for a job at KSAX in Alexandria before returning to Iowa for her KIMT position.

Since Huisentruit's disappearance in 1995, police and private investigators have conducted more than 1000 interviews relating to her disappearance. None have resulted in conclusive evidence pointing towards a suspect. Huisentruit was declared legally dead in May 2001.

In May 1996, about 100 volunteers searched an area of Cerro Gordo County and left flags to mark anything that appeared suspicious. Each of these sites was then re-examined by law enforcement, but no promising evidence was located.

There have been periodic resurgences in the story. When new cases arise that appear to bear similarities to Huisentruit's or remains are found in the area, speculation quickly leads to a connection with the missing reporter. So far, however, no suspect has been tied to Huisentruit's disappearance and all remains have proven to be from other sources. In 2005, many media outlets, including 20/20, again focused on the story as the 10th anniversary of the disappearance approached.

In early June 2008, photocopies of the 84 pages of Huisentruit's personal journal were anonymously mailed to a local newspaper. The Mason City Globe Gazette received the material in a large envelope with no return address and a June 4 postmark from Waterloo, Iowa. The original journal has been in the possession of law enforcement since the investigation of Huisentruit's disappearance began. Within days, Mason City Police reported that the sender had come forward and then identified her as the wife of the former Mason City Police Chief. Although noting that the former chief had taken a copy of the journal home when he left office, the police gave no motive for his wife sending the copy to the newspaper.

The FBI, the Mason City Police Department, the Iowa Division of Criminal Investigation, and MAIS's investigators are all still actively working on Huisentruit's disappearance, and the television show Nancy Grace: America's Missing spotlighted her case on February 23, 2011, and again on December 6, 2013.

In May 2015, all 100 members of the Iowa State House of Representatives signed a letter asking for the City of Mason City to declare June 27, 2015, as Jodi Huisentruit Day in honor of her memory and that of all victims in unsolved cases.

In December 2016, retiring Iowa State Representative John Kooiker of Sioux County, Iowa, described his experience with the case as a member of the Iowa State House Public Safety Committee and suggested a cover-up by Mason City officials. His opinion piece was published in The N'West Iowa Review.

As of February 2018, Huisentruit has not been found, neither have remains been identified as hers.