Jean-Pierre Bemba was born on November 04, 1962 in Équateur, Congolese, is Politician. Jean-Pierre Bemba is a political leader of the Democratic Republic of Congo who was involved in a violent power struggle. He is currently undergoing trial in the International Criminal Court for war crimes. He was so hell bent on seizing the power that he founded a rebel group to achieve his objective. He was ultimately able to coerce the government of the Democratic Republic of Congo into a power-sharing agreement and was made one of the four vice presidents in the transitional government. From an early age, he led a very privileged life amongst peers who are severely disadvantaged. His father was not only an extremely successful businessman and self-proclaimed millionaire but also had ties with the reigning dictator Mobutu Sese Seko. When his country had a shift in power Bemba was openly and violently opposed. In response he formed a militant group. His violence eventually coerced his government into forming an agreement and allowing for power-sharing. When presidential elections came around, however, he was not chosen to lead the country. Again violence erupted and eventually his violent supporters caused such a bloody protest that he was escorted out of the country by the United Nations’ forces. A very short time later he was arrested for international war crimes as well as crimes against humanity. Currently, he is still detained and his trial is still ongoing. His first trial was thrown out when Bemba again used intimidation, threats, and bribes to falsify witness testimony in his favor.
Jean-Pierre Bemba is a member of War Criminals 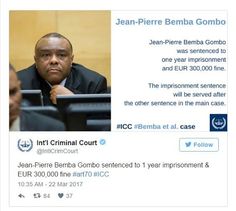 The MLC movement started in the Orientale Province of the DRC in 1998. Little by little, the movement moved into the Équateur province, and established a permanent base in Gbadolite.

In 2002, President Ange-Félix Patassé of the Central African Republic invited the MLC to come to his country and put down a coup attempt. Human rights Activists accused MLC fighters of committing atrocities against civilians in the course of this conflict.

On November 27, 2006, the Supreme Court of the DRC rejected the fraud charges brought by Bemba, and confirmed Kabila as the new elected Congolese President. A day later, Bemba said that he disagreed with the court's decision, but that "in the greater national interest and to preserve peace and to save the country from chaos and violence", he would participate in the system by leading the political opposition. He did not attend Kabila's swearing-in ceremony on December 6. On December 8, the MLC announced that Bemba would run for a Senate seat from Kinshasa in the January 2007 senatorial election, and he succeeded in winning a seat.

In March 2003, Central African President Ange-Félix Patassé was ousted, and the government that replaced him pressed charges against Patassé and Bemba in September 2004. International arrest warrants were issued, but because the new government was unable to have Bemba arrested, the matter was referred to the International Criminal Court (ICC). On May 22, 2007, ICC prosecutor Luis Moreno-Ocampo decided to open investigations into crimes committed in the Central African Republic.

On May 24, 2008, Bemba was arrested near Brussels. He was surrendered to the ICC on 3 July 2008 and transferred to its detention centre in the Hague. He was the only person arrested in connection with the ICC's investigation in the Central African Republic. The Supreme Court of the Central African Republic found no basis to pursue cases against Bemba and former CAR President Ange-Félix Patassé.

On 2 December 2009 the ICC ruled that Bemba was a FLIGHT risk and must remain in custody until his trial.

On 28 September 2016, Bemba served the ICC appeals chamber with an appeal against his 18-year conviction citing numerous procedural and legal errors in the judgment, and alleging a mistrial. On 4 May 2017, he also filed an appeal against his conviction for interfering with witnesses, alleging factual and legal errors on the part of the trial chamber, and illegal investigative activity by the ICC Office of the Prosecutor. The appeal judgements in both cases are pending.