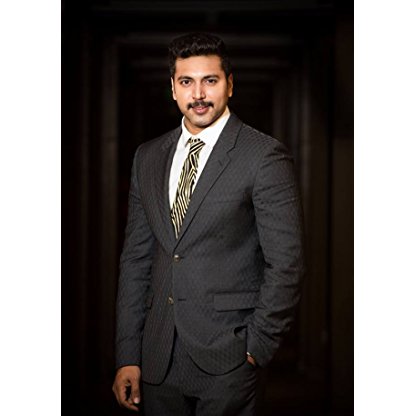 Jayam Ravi was born on September 10, 1980 in  Madras, Tamil Nadu, India, India, is Actor, Music Department, Soundtrack. Ravi was born to Tamil parents, editor Mohan and Varalakshmi Mohan. He has two siblings, his elder brother M. Raja is a noted film director, with most of his films featuring Ravi in the lead role, while his sister, Roja Mohan, is a dentist. He completed his schooling at Jawahar Vidyalaya in Ashok Nagar, Chennai. He studied dancing under the bharatnatyam dancer Nalini Balakrishnan and performed his arangetram at the age of 12. After completing his degree in Visual communication from Loyola College, Chennai,he decided to get into the film industry. He has also undergone training in acting at the Kishore Namit Kapur Institute in Mumbai. He is a martial arts expert and a trained bharatanatyam dancer. Prior to acting, Ravi had been an assistant director to Suresh Krishna in the 2001 film Aalavandhan.
Jayam Ravi is a member of Actor

During his childhood, Ravi acted as a child actor in two Telugu films; Bava Bavamaridi and Palnati Pourusham, which were produced by his father. Jayam Ravi made his acting debut in the action-masala film Jayam, produced by his father and directed by his brother Mohan Raja. It was a remake of the 2002 Telugu film of the same name. His next venture was the sentimental drama M. Kumaran Son Of Mahalakshmi (2004), the remade version of the Telugu film Amma Nanna O Tamila Ammayi, in which he starred alongside Asin Thottumkal. Ravi's performance was widely positively received; a critic from Sify wrote that he delivered a performance that "makes you want to see more of him", while The Hindu's Malathi Rangarajan cited that he came out with an "appreciable portrayal throughout." The film, considered a family entertainer, received the Tamil Nadu State Film Special Award for Best Film and fetched Ravi himself the Tamil Nadu State Film Award for Best Actor. It also emerged a high financial success.

His next release, Daas (2005), another action-masala flick, and his first original film following two remakes, featured him as a football player. The film took an even bigger opening than his previous ones and was declared a hit as well. He garnered positive remarks from critics, with Sify's reviewer claiming that Ravi was a "hundred percent convincing as an action hero," further labelling his performance as "impressive." Mazhai, a remake of the Telugu film Varsham, was his other release that year, which was "lukewarm" at the box office. In 2006, he starred in Saran's Idhaya Thirudan, which was a box office bomb, following which, he acted in Unakkum Enakkum (initially released and promoted as Something Something Unakkum Enakkum), again under his brother's direction in another remake of a Telugu film. Ravi portrayed a rich, happy-go-lucky NRI from London, who has to live and fight for his love in dire conditions in a rural milieu. The film, which featured Trisha Krishnan alongside Ravi, became a high critical as well as financial success, emerging one of the highest-grossing and most-profitable films of the year. The N. Linguswamy-produced Deepavali under Ezhil's direction became his only 2007 release.

In 2008, Ravi appeared in three films. Following a cameo appearance in Velli Thirai, he acted in the family drama Santhosh Subramaniam, once again under his brother's direction in a remake. In the Tamil version of the 2006 Telugu film Bommarillu, starring opposite Genelia D'Souza, he played the role of a young man, whose choices and wishes are continually subdued by his father. Ravi received a nomination for the Best Tamil Actor Award at the 56th Filmfare Awards South. Next, he starred in the action thriller Dhaam Dhoom, directed by cinematographer-director Jeeva, who died in the midst of the film's shooting in Russia. Completed by Jeeva's assistant Manikandan, his wife Aneez Tanveer and his guru P. C. Sreeram, Dhaam Dhoom released in mid-2008 in which he portrayed Gautham Subramaniyam, a man accused in a murder he did not commit. His performance was met with favourable reviews from critics, with Sify's reviewer writing that he was "simply amazing in his role", labelling the film as an "out and out Jayam Ravi movie", while Indiaglitz noted that Ravi was "probably the perfect choice to play the character".

In 2009, he starred in the action film Peranmai, directed by S. P. Jananathan, in which he enacted the role of Dhruvan, a tribal forest officer. In his next film Thillalangadi (2010), he paired up with his brother for the fifth time to appear in a remake of a Telugu work. Thillalangadi, the Tamil version of the 2009 film Kick, opened to average grossing and could not repeat the success of its original version. In 2011, he played a playboy character in choreographer-turned-director Prabhu Deva's romantic musical Engeyum Kaadhal, which also fetched mixed reviews. In 2013, he acted in the gangster-thriller Aadhi Bhagavan under the direction of Ameer. The film opened to mixed to negative reviews from critics and was declared a below average grosser at the box office. His next film Nimirndhu Nil, released in March 2014. It received mixed reviews, but was a commercial success.

Ravi's parents are the veteran film Editor Mohan and Varalakshmi Mohan; he was born in Tirumangalam, Madurai. He has two siblings; his elder brother Mohan Raja is a film Director, with most of his films featuring Ravi in the lead role, while his sister Roja is a dentist. He completed his schooling at Jawahar Vidyalaya in Ashok Nagar, Chennai. He studied dancing under the Bharatnatyam Dancer Nalini Balakrishnan and performed his arangetram at the age of 12. After completing his degree in Visual Communication from Loyola College, Chennai, he decided to get into the film industry. He also then trained in acting at the Kishore Namit Kapur Institute in Mumbai. Before debuting as an actor, Ravi had been an assistant Director to Suresh Krishna for Aalavandhan (2001), starring Kamal Haasan. He has been married to Aarti, daughter of noted television Producer Sujatha Vijayakumar since 2009. They have two sons: Aarav (born on 29 June 2010) and Ayaan (born August 10, 2014). Aarav has played a small role in his film Tik Tik Tik.

In 2015, Ravi appeared in four films: Romeo Juliet, Sakalakala Vallavan, Thani Oruvan and Bhooloham. His first film in 2015 was the Lakshman directorial romantic comedy Romeo Juliet and he was paired with Hansika Motwani for the second time. The film received an average reviews from critics. His next was Suraaj's comedy film Sakalakala Vallavan. The film opened to negative reviews and was a commercial failure. He again paired with his brother Mohan Raja in his direct film Thani Oruvan. His next film was Bhooloham, which was a commercial success.

In 2016, his only release was the zombie-thriller Miruthan. The film received positive to mixed reviews from critics. Ravi's performance was appreciated. In 2017, he appeared in the fantasy-thriller Bogan, paired opposite to Hansika Motwani for the third time. Next,released an adventurous A. L. Vijay directorial Vanamagan as a jungle man, Shakti Soundar Rajan's Tik Tik Tik and the magnum opus Sangamithra. 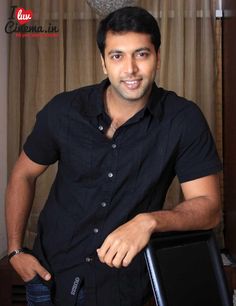