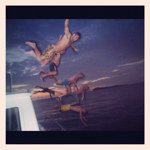 He started his amateur career playing for Wonthaggi's youth team.

He became the second youngest player on Collingwood's Premiership team in 2010 at the age of 19.

His uncle, John Blair, played in the Victorian Football League.

He became teammates with Dale Thomas on Collingwood FC in 2010.