Gian Villante was born on August 18, 1985 in Wantagh, New York, United States, is Mixed Martial Artist. Gianpiero Villante, known popularly as Gian Villante, is an American mixed martial artist. He currently fights for Ultimate Fighting Championship in the light heavyweight division. Born in Wantagh, New York, he used to take part in New York State Championships in his early years. During his junior year, he stood at the third position in the Championship. Also an avid footballer, he had won the Thorpe Award while playing for MacArthur High School. Later, he started training at MMA, and shortly after, he made his MMA debut. Eventually he also made his debut at the Ring of Combat. During his fighting career at the UFC, he has won the Fight of the Night championship three times. He also won the Ring of Combat Heavyweight Championship twice. He signed a deal with Strikeforce in 2011, after which he faced Chad Griggs in a Heavyweight Grand Prix Reserve Bout. However, he lost the fight. Later, at the ‘Strikeforce Challengers: Gurgel vs Duarte’, he won his first fight at the Strikeforce after defeating Keith Berry.
Gian Villante is a member of Sportspersons 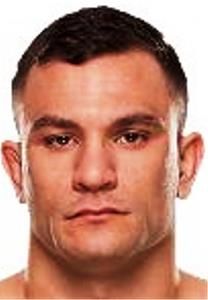 Villante attended MacArthur High School (Levittown, New York) and was part of the Class of 2003. During his junior year, he placed third in the New York State Wrestling Championships. He followed this up his senior year by winning the New York State Championship at the 215 pound weight class. Villante was equally accomplished in football, in which he received the 2002 Thorpe Award winner as the top football player in Nassau County, also the Bill Piner Award as the top linebacker in Nassau County and was named to the High School Heisman All-Star team. Villante drew interest from major Division I schools, such as Penn State and Michigan State. Villante chose to stay home and committed to Hofstra University. Villante attended Hofstra University from 2003-2007 where he continued his highly successful football and wrestling careers. Villante started his first game against Marshall University, as a true freshman, at middle linebacker. Gian kept his starting role the rest of his freshman year. The following season Villante was named a 2004 1st Team Defensive I-AA All-American by The Sports Network. He was regarded as a potential NFL linebacker prospect. The New York Giants, New York Jets, Indianapolis Colts, and Philadelphia Eagles all expressed interest in Villante. Villante wrestled for Hofstra where he became close with NCAA All-American Wrestler and Future UFC Middleweight Champion Chris Weidman.

Villante made the decision to drop back down to light heavyweight. In his next bout, Villante would take on undefeated prospect Lorenz Larkin on June 24, 2011 at Strikeforce Challengers: Fodor vs. Terry. After repeatedly taking down Larkin and easily taking the first round, Villante appeared to be suffering from his dramatic weight cutting. Villante began to tire and eventually Larkin went on to win a unanimous decision. Questions began to swirl as to whether or not Villante could effectively complete a Three Round Fight. He was also criticized for not sticking to a wrestling game plan.

Villante's next fight was against Trevor Smith on the preliminary card of Strikeforce: Rockhold vs. Jardine on January 7, 2012. Gian quickly attacked Smith catching a leg strike four seconds in. After landing several clean punches and knees on the ground, both stood up. The two trade strikes for about thirty seconds, when Villante once again caught a Smith kick and took him down. Villante held onto the leg and began landing numerous unanswered right hands, prompting Referee Kim Winslow to stop the fight at 1:05 of the first round.

For his UFC debut, Villante faced fellow promotional newcomer Ovince St. Preux on April 27, 2013 at UFC 159. The fight ended in unusual fashion as St. Preux accidentally poked Villante in the right eye with his thumb and Referee Kevin Mulhall immediately called an end to the fight after Villante indicated that he could not see. As a result of the injury, the fight went to the judges' scorecards and St. Preux won a majority technical decision (30–28, 30–29, 29–29).

Villante was expected to face Corey Anderson on December 6, 2014 at UFC 181. However, Villante pulled out of the fight citing an injury. Anderson remained on the card against Justin Jones.

Villante faced Anthony Perosh on November 15, 2015 at UFC 193. Villante won the fight via knockout in the first round.

Villante was briefly linked to a bout with Marcos Rogério de Lima on November 12, 2016 at UFC 205. However, Villante pulled out of the fight on September 21 citing a minor injury and the bout was scrapped. In turn, Villante is expected to face Patrick Cummins the following month on December 9, 2016 at UFC Fight Night 102. Subsequently, Cummins pulled out of the fight on December 2 citing a staph infection. He was replaced by promotional newcomer Saparbek Safarov. Villante won the fight via TKO in the second round. Both participants were awarded Fight of the Night for their performance.

A rescheduled bout with Patrick Cummins eventually took place on July 22, 2017 at UFC on Fox 25. Villante lost the back-and-forth fight via split decision.