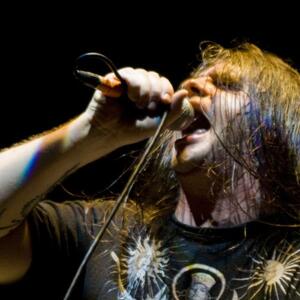 He is best known for being the front man for the band Cannibal Corpse as well as he bands Paths of Possession and Serpentine Dominion. Fisher first recorded two albums with the band Monstrosity. He replaced Chris Barnes as the vocalist in Cannibal Corpse in 1995. He uses the death growl extended vocal technique. From 1996 to 2017 he was featured on 10 albums by Cannibal Corpse and has also been featured on albums by Paths of Possession, Voodoo Gods, Dethklok, Suicide Silence, Job for a Cowboy, Suffocation, and more. Fisher has been featured on the animated series Metalocalypse and has voiced the role of the Metal Masked Assassin. He was also featured as a non-player character Gorge the Corpsegrinder in the video game World of Warcraft: Wrath of the Lich King.