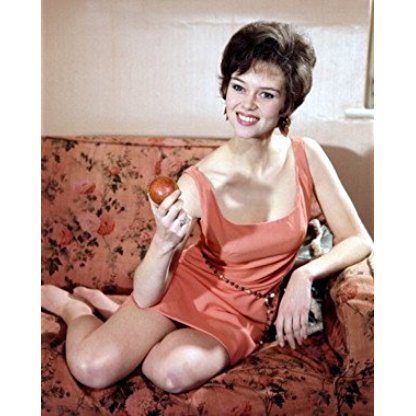 Gabrielle Drake was born on March 30, 1944, is Actress. Gabrielle Drake was born March 30, 1944 in Lahore, Pakistan. Her father worked in an import/export company or as an engineer and she spent her first 8 years travelling around Burma, India, and the Orient. The family returned to England when Gabrielle was eight years old, after which they moved back near Stratford-upon-Avon. She was educated at Wycombe Abbey School for Girls in High Wycombe. After leaving school, she spent some time in Paris as an au pair girl looking after a family with four children. She then trained for several years at the Royal Academy for Dramatic Arts, then she joined a group of other recently graduated students to form the Everyman Theatre in Liverpool.Gabrielle stayed at the Everyman for three years and then became the youngest acting member during the reopening season of the famed Malvern Theatre Company. Afterwards she joined the Birmingham Repertory Company and perfected her craft at Manchester's Royal Exchange, the Bristol Old Vic, the New Shakespeare Company and The Young Vic in productions as diverse as "The Cherry Orchard", "Titus Andronicus", "A Phoenix Too Frequent" and "Comedy of Errors".Gabrielle made her television debut in Intrigue (1966) and then guested in "The Hidden Tiger", an episode of The Avengers (1961). She went on to appear in guest roles on Coronation Street (1960), The Saint (1962), The Champions (1968), Journey to the Unknown (1968), and Virgin of the Secret Service (1968) before landing the role of Lt. Gay Ellis in Gerry Anderson's UFO (1970). Then she made her feature film debut co-starring in Crossplot (1969), and also appeared in Connecting Rooms (1970).After completing work on UFO, she appeared in a series of sex comedy films such as There's a Girl in My Soup (1970), Suburban Wives (1972), Au Pair Girls (1972) and Commuter Husbands (1974), but was also much seen on television, in particular as Jill Hammond in The Brothers (1972) which made her a household name.
Gabrielle Drake is a member of Actress 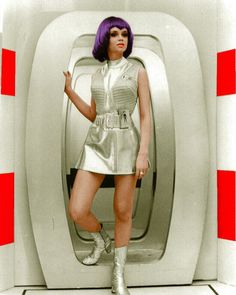 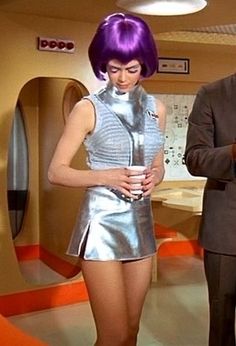 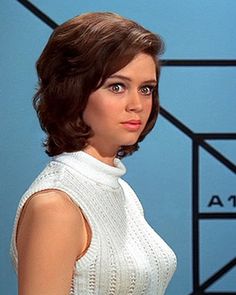 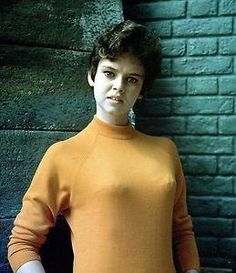 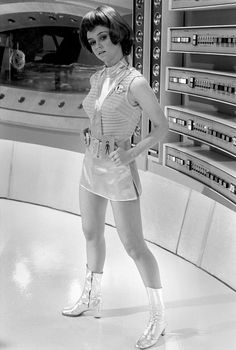 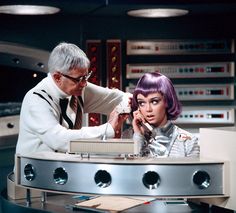 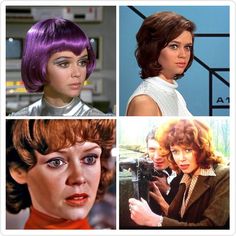 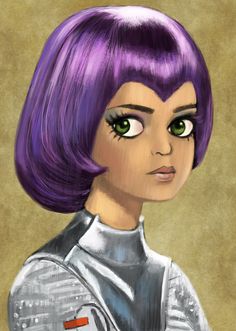 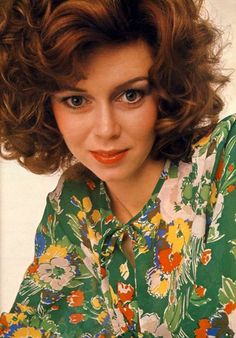 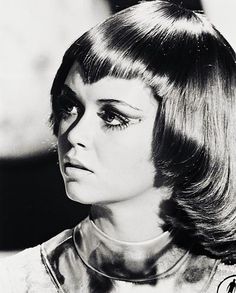 Until then, life was fairly easy out east. There were lots of servants ... not that I remember having a spoilt childhood. Then suddenly we were back in England and in the grips of rationing. And yet, we were lucky in a way. We came back with my nanny who knew far more about England than mummy did. I remember the two of them standing over the Aga with a recipe book trying to work out how to roast beef, that sort of thing!

On the ship travelling to Britain she appeared in children's theatrical productions, later saying of herself "I was a dreadful exhibitionist." She attended Edgbaston College for Girls in Birmingham, Wycombe Abbey School, Buckinghamshire and the Royal Academy of Dramatic Art (RADA) in London. She has had a long stage career beginning in the mid-1960s, and has regularly appeared in television dramas.

Drake made her stage debut in 1964, during the inaugural season of the Everyman Theatre, Liverpool, playing Cecily in The Importance of Being Earnest. In 1966, she joined the Birmingham Repertory Company and played Queen Isabella in Marlowe's Edward II. She also had roles in Private Lives (with Renee Asherson), The Simpleton of the Unexpected Isles (with Linda Marlowe and Patrick Mower), Twelfth Night and Inadmissible Evidence. The following year, she was Roxanne in Cyrano de Bergerac at the Open Air Theatre, Regent's Park. In the 1974-5 season at the Bristol Old Vic, she played in Cowardy Custard, a devised entertainment featuring the words and music of Noël Coward. In 1975, she appeared as Madeline Bassett in the original London cast of the Andrew Lloyd Webber and Alan Ayckbourn musical Jeeves. She also appeared in French Without Tears at the Little Theatre, Bristol. In 1978, she played Lavinia, opposite Simon Callow in the title role, in Shakespeare's Titus Andronicus, directed by Adrian Noble, at the New Vic, Bristol. She also appeared at the Bristol Old Vic in that year, in Vanbrugh's The Provok'd Wife.

Her early television appearances include The Avengers (1967), Coronation Street (as Inga Olsen in 1967) and The Saint (1968). In 1970, she auditioned for the part of Jo Grant in Doctor Who, reaching the final shortlist of three, but did not get the part.

In the early 1970s Drake was associated with the boom in British sexploitation movies, repeatedly appearing nude or topless. She played a nude artist's model in the 1970 film Connecting Rooms, and was one of Peter Sellers' conquests in the film There's a Girl in My Soup. She also played one of the lead roles in the sex comedy Au Pair Girls (1972) and appeared in two Derek Ford films, Suburban Wives (1971) and its sequel Commuter Husbands (1972), in which she played the narrator who links the disparate episodes together.

In 1971 Drake appeared in a short film entitled Crash!, based on a chapter in J. G. Ballard's book The Atrocity Exhibition. The film, directed by Harley Cokeliss, featured Ballard talking about the ideas in his book. Drake appeared as a Passenger and car-crash victim. Ballard later developed the idea into his 1973 novel Crash. In his draft of the novel he mentioned Drake by name, but references to her were removed from the published version. In 2009, Ballard appeared on the BBC documentary series Synth Britannia and played Gary Numan's song "Cars". He interspersed clips of Drake from Crash! with Numan's 1979 video. A reviewer in The Scotsman commented that the presence of Drake "brought serious glamour to urban alienation".

Her brother was the musician Nick Drake. She has consistently helped to promote his work since his death in 1974.

She has made regular appearances at the Royal Exchange Theatre, Manchester, since her debut there in a non-pantomime version of Cinderella, written by Trevor Peacock, in 1979. That same year, she co-starred with Sorcha Cusack and Susan Penhaligon in Caspar Wrede's production of The Cherry Orchard. In 1986, she was Madame Gobette in the British premiere of Maurice Hennequin's Court in the Act, which subsequently played at the Yvonne Arnaud Theatre, Guildford, and the Theatre Royal, Bath, before transferring to the Phoenix Theatre in London (1987). Other roles at the Royal Exchange include Mrs Erlynne in Lady Windermere's Fan (1996); Anna in The Ghost Train Tattoo (2000); Fay in Loot (2001); Lady Bracknell in The Importance of Being Earnest (2004); and The Comtesse de la Briere in What Every Woman Knows (2006). At the same theatre in 2001, Drake replaced Patricia Routledge as Mrs Conway during the rehearsal period for J. B. Priestley's Time and the Conways, when Routledge was forced to withdraw from the production due to illness.

She lives in Wenlock Abbey in Much Wenlock, Shropshire with her husband of over 40 years the South African-born Artist Louis de Wet. The couple bought the house in 1983. She and her husband have renovated their home over several years as an artistic project. In 2004 he described it as "the most beautiful building site in the world". Drake was the Producer of In the Gaze of the Medusa, a 2013 film by Gavin Bush about the renovation project and her husband's designs for the house.

She was directed by Mike Ockrent in Look, No Hans!, alongside David Jason, during the 83-84 season at the Theatre Royal, Bath. She made a second appearance in The Importance of Being Earnest at the Royalty Theatre, London, in a production directed by Donald Sinden, which also starred Wendy Hiller, Clive Francis, Phyllida Law and Denis Lawson (87-88). In 1988, she played Fiona Foster in a revival of Ayckbourn's How the Other Half Loves, first at the Greenwich Theatre, then at the Duke of York's Theatre. During the 1990-91 season at the Theatre Royal, Bath, she played in Risky Kisses with Ian Lavender. She was in the Mobil Touring Theatre's official centenary production of Charley's Aunt in 1991, with Frank Windsor, Patrick Cargill and Mark Curry. In 1993, she was Monica in Coward's Present Laughter at the Globe Theatre, London, in a revival directed by and starring Tom Conti. She co-starred with Jeremy Clyde in the 1995 King's Head Theatre tour of Cavalcade, directed by Dan Crawford. In 1999, she was Vittoria in Paul Kerryson's production of The White Devil at the Haymarket Theatre, Leicester. She also toured with the Oxford Stage Company in that year, as Hester Bellboys in John Whiting's A Penny for a Song, alongside Julian Glover, Jeremy Clyde, and Charles Kay. She played Mrs Malaprop in the 2002 touring production of The Rivals with the British Actors' Theatre Company, whose artistic Director, Kate O'Mara, was Drake's co-star in the TV series The Brothers.

Elsewhere, she has appeared in her one-woman show, Dear Scheherazade, as the 19th century Writer Elizabeth Gaskell (2005, 2007, 2010). At the Chipping Campden Literature Festival in 2011, she and Martin Jarvis read extracts from the letters and diaries of Robert and Clara Schumann in the recital, Beloved Clara. She had appeared in the same piece the previous year, again with Jarvis and the Pianist Lucy Parham, at the Wigmore Hall in London.

Drake has helped to ensure the public renown of her brother Nick Drake and her mother Molly Drake. She can be heard accompanying her brother Nick on a number of songs that he recorded privately, and which have since been released on the album Family Tree. After the release of songs written and performed by her mother, she said "Her creativity was a personal thing, and she was lucky to be able to develop it in an environment where that side of her was totally accepted. Indeed, my father encouraged it. He was so proud of her. On one occasion, he even made the 20 mile drive to Birmingham to get four songs pressed onto a disc." In 2014 she published Nick Drake: Remembered for a While, a memoir of her brother. In April 2018, Gabrielle collected the Hall of Fame Folk Award 2018 on her brothers behalf in Belfast.