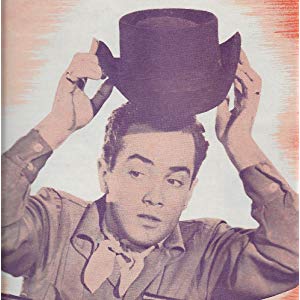 A promising post-war musical entertainer from the bandstand as well as in late 40s films, singer Freddie Stewart is a name that slips by most. Born Morris Joseph Lazar on March 25, 1921, in New York City, his father was a cantor.
Freddie Stewart is a member of Actor

A promising post-war musical entertainer from the bandstand as well as in late 40s films, singer Freddie Stewart is a name that slips by most. Born Morris Joseph Lazar on March 25, 1921, in New York City, his father was a cantor. Freddie was forced to drop out of school while relatively young and work as a clerk to help support his family. His musical talents were noticed early and he found work in the Catskills resort area where he introduced himself with a more suitable marquee name -- Freddie Stewart. By 1940 he had moved up in the musical field as a tenor vocalist with Clyde McCoy's Orchestra, which led to his own radio show, "Freddie Stewart Sings," in New York.

A compact, highly personable young man with wavy hair and an appealing, boyish enthusiasm, Hollywood's ears eventually caught the sound of this young New York talent, and the powers that be encouraged him to move West. Following a brief singing spot in Columbia's She's a Sweetheart (1944) which starred Larry Parks, no other offers came in so Freddie accepted a steady job with the Tommy Dorsey Orchestra, hoping to attain at least a measure of the success his idol Frank Sinatra had found. Following this period he signed with the small "Poverty Row" studio Monogram and starred in a succession of eight bobbysoxer musicals featuring a main staple of players including June Preisser (as his love interest), Noel Neill of "Superman" fame (playing June's sister), and Frankie Darro (as his nemesis), among others. Billed as the "Teenagers" in the show, the cast, most in their late 20s, were pretty long in the tooth to be playing collegiates much less high schoolers. Despite the flimsy plots and frivolous nature, the tunefests, which began with Junior Prom (1946), and ended with Music Man (1948) succeeded as breezy escapist fare and proved popular enough as second features to make money for Monogram. Freddie usually had a solo or two in each picture. The youthful romantic lead, who was only 5'6" tall, found little waiting for him after the demise of the series. Audiencegoers were looking for Hollywood he-men to idolize now. He didn't fit the bill and promptly retired from films.

Freddie went out on the road in both Europe and the U.S. and at one time fronted his own night club in Miami Beach called "Freddie Stewart's Matchbox," but it soon folded. He kept singing for years with no major film or TV comeback happening for him. Quietly retired, he had been divorced three times by the time he died on August 15, 2000, in his Southern California home. He was survived by a daughter.