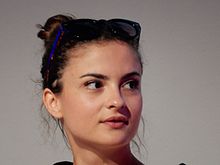 Eva Josefíková was born on February 03, 1990. Eva Josefiková was born in Uherske Hradiste where she studied at the local gymnasium. She started her theatrical career in 1999 as a student of literature and dramatic studies at Elementary school of Art at Uherske Hradiste. She was an active member of "Dohrali jsme" (That's a wrap) theatrical group, playing among the others the role of Viktorka in the adaptation of Bozena Nemcová's Babicka (Grandmother) or Adele from Frederic Garcia Lorca's House of Bernarda Alba. She is now in a fourth year of her dramatic studies at Theatre Faculty of the Academy of Performing Arts in Prague (DAMU). Eva Josefikova appeared as a guest in Czech National Theatre as Barunka in the Grandmother and also in the End of Carnival, both directed by J. A. Pitinsky. She took the role of Nina Zarecna in Czechov's Seagull in autumn of 2011 at Estates Theatre and she plays several roles in Enron, both directed by Michal Docekal. She is a member of "Tygr v tisni" (Tiger in Need) theatrical company from 2011. She could be seen in Disk theatre as Lilly Cahill in S. Stephens Punk Rock, directed by I. K. Kubak. Eva Josefiková played in czech movies (Devils Bride, Piko, Signal, I'll Wake Up Yesterday etc.). She also participates in student projects.