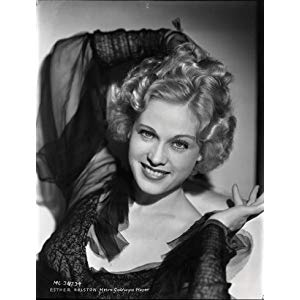 Projected as wholesome but fun-loving, Maine-born leading lady Esther Ralston enjoyed a prime silent age career and, at her peak, was packaged and publicized as "The American Venus" by none other than that of showman Florenz Ziegfeld Jr.
Esther Ralston is a member of Actress

Projected as wholesome but fun-loving, Maine-born leading lady Esther Ralston enjoyed a prime silent age career and, at her peak, was packaged and publicized as "The American Venus" by none other than that of showman Florenz Ziegfeld Jr. after appearing as a dazzling beauty queen in the film of the same name (The American Venus (1926)). A decade later, the blonde beauty's career, however, had tapered off.

Christened Esther Worth in 1902, Ms. Ralston endured a "born in a trunk" existence as the child of parents who graced the burlesque, carnival and vaudeville circuits. By the time she was 2, she had become a part of the family act (which included four brothers) with the billing now extended to "The Ralston Family with Baby Esther, America's Youngest Juliet."

Esther broke into silent films as a teen and, after several unbilled roles, went on to become one of filmdom's highest-paid silent stars in scores of dramas, comedies and westerns (the last mentioned notably opposite Hoot Gibson and Tom Mix). Outside of her "American Venus" lead, her more familiar earlier roles were as Mrs. Darling in the silent classic Peter Pan (1924) and as the Fairy Godmother in A Kiss for Cinderella (1925). Her lesser known younger brother Howard Ralston (1904-1992) also worked as an actor on the silent screen. They both had roles in the Mark Twain classic Huckleberry Finn (1920).

Appearing in close to 100 films over a nearly 30-year period of time, she made several of them for Paramount and MGM come the advent of sound, including her first talkie Sawdust Paradise (1928); the title role in The Case of Lena Smith (1929) a "lost" film directed by Josef von Sternberg; Betrayal (1929) starring Emil Jannings and Gary Cooper, and the romantic musical The Prodigal (1931) opposite Metropolitan opera star Lawrence Tibbett. She also found occasional favor in England, appearing opposite Basil Rathbone in After the Ball (1932) and Conrad Veidt in Rome Express (1932). After supporting roles in Tin Pan Alley (1940) and San Francisco Docks (1940), Esther retired from the big screen and thereafter appeared on stage and in radio soaps.

She earned her fortune from investments but eventually lost that fortune due to the stock market crash. Forced to find work outside of the world of entertainment, she was occasionally glimpsed on TV in the 1950s and early 1960s. In the ensuing years she found herself employed as a department store salesperson and talent executive.

The thrice-divorced actress (her first two were to actor/director George Webb and actor/singer Will Morgan) died in Ventura, California, on January 14, 1994, of a heart attack. She had three children from the totality of her marriages. She was given a star on the Hollywood Walk of Fame for her film work.