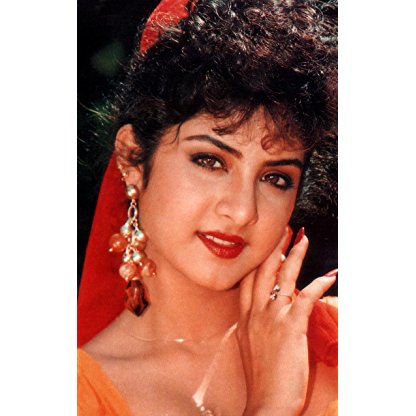 Divya Bharti was born on February 25, 1974 in  Bombay, Maharashtra, India, India, is Actress. Divya was born on February 25, 1974 to Meeta and Om Prakash Bharti.Opting for acting, she quit college, & landed a role in 'Bobbili Raja' (Telegu) in 1990 at just 16 years of age. This movie became a hit, and was dubbed into Hindi and released as 'Raampur Ka Raja'.Divya made her debut in Bollywood in 1992 'Dil Hi To Hai', then in a musical romance 'Dil Ka Kya Kasoor', but it was the multi-starer 'Vishwatma' that really got her noticed. Thereafter she acted in 13 more movies amidst speculations that she would be the next Sridevi.Her personal life was not as well chartered as her tinsel one, for she fell in love with Sajid Nadiadwala, married him secretly as her parents strongly disapproved, changed her religion from Hindu to Islam, and her name to Sana.Her life tragically came to an end on April 5, 1993 when she fell from the balcony of her 5th floor flat in Yari Road, Versova. Two of her movies 'Rang' and 'Shatranj' were released after her passing, and were dedicated to her memory. Her film-maker husband has also dedicated several of his films to her name.
Divya Bharti is a member of Actress 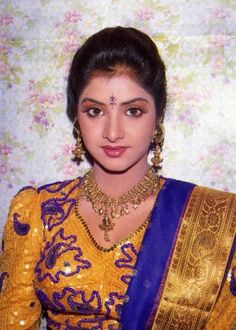 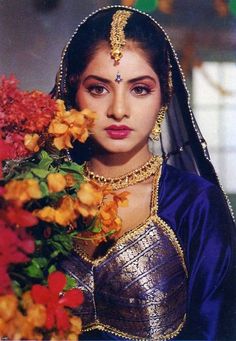 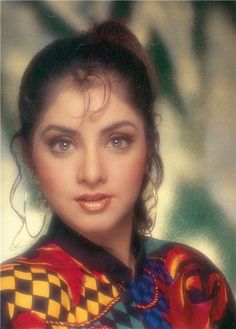 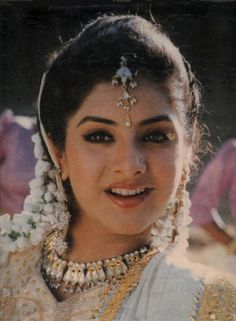 In 1988, Bharti was discovered by filmmaker Nandu Tolani. Upon seeing her, Tolani insisted on signing her for one of his films. At that time, Bharti was in the ninth standard (in ninth grade). She was originally scheduled to make her screen debut in Gunahon Ka Devta in 1988, but her role was cancelled. Kirti Kumar noticed Bharti at a video library, and thus was eager to sign her for his project Radha Ka Sangam opposite Govinda, as he was searching for a new face. Weeks later, Kumar met with Dilip Shankar and managed to release Bharti from her contract. After taking dancing and acting lessons for months to prepare for her role, Bharti was eventually dropped and replaced by Juhi Chawla. Though the reasons remain unclear, it was speculated that Kumar's possessiveness over Bharti and her childish nature were the cause of her replacement.

Bharti's career was stalled until D. Ramanaidu, Telugu film Producer, offered her Bobbili Raja opposite his son Daggubati Venkatesh. Without hoping for success after experiencing many failures in Bollywood, she commenced shooting in Andhra Pradesh for her screen debut. The film was released in the summer of 1990 and became a colossal hit. Bobbili Raja remains to this day one of the most popular Telugu movies. Bharti acted in only one Tamil film, Nila Penne opposite Anand. The film was critically and financially unsuccessful.

In box office ratings, she figured next to Vijayshanti. In 1991, Bharti had back-to-back hits, including Rowdy Alludu and Assembly Rowdy, opposite actors Chiranjeevi and Mohan Babu.

Bharti met Sajid Nadiadwala through Govinda at the shooting of Shola Aur Shabnam, and they were married on 10 May 1992.Divya got married to Sajid in the presence of her hairdresser Sandhya, the hairdresser's husband and a kazi at Tulsi apartments, Sajid's Versova residence. She converted to Islam and took a new name Sanah Divya died on April 5, 1993 at age 19. She fell from her 5th storey balcony from her window. The reason of falling was never established and several theories circulated in the media during that time, including falling under influence of alcohol, push by someone, suicide, and involvement of her husband and underworld mafia. The investigation was closed in 1998 by Mumbai police and the reason of death was stated as accidental death. She was cremated on 7 April 1993 at the Vile Parle crematorium, Mumbai.

Bharti died on 5 April 1993, aged 19, from head injuries sustained after falling off the balcony of her fifth-floor apartment at Tulsi Buildings in Versova, Mumbai.

She was more than halfway through the filming of Laadla at the time of her death and the film was reshot with Sridevi replacing her. She was replaced in several films she had signed such as Mohra, Kartavya, Vijaypath and Andolan. Some movies which she had signed for were subsequently shelved, such as Parinaam with Akshay Kumar, Kanyadaan with Rishi Kapoor.Bollywood legend Dev Anand made a movie chargesheet based on her death and the mystry surrounding it which was released on 30th september 2011.