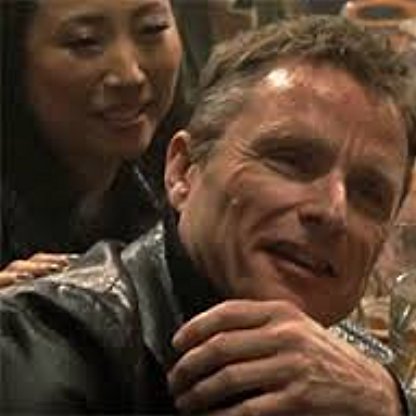 America, it shouldn't be forgotten, is a country founded by Puritans. Although a lot of this morality was outdated when it was first enforced, a curtain of morality still hangs over this country. It's a chain on the American Psyche. There's this idea here that all archetypes have to fulfill an absolutely ludicrous moral code.

Born John Dikran Utidjian in London, England, Dikran grew up in the Middle East, the Caribbean and the USA as his family followed his father's medical career. After spending his teen years in Pittsburgh, Pennsylvania, he moved to London in the mid-70s to pursue his interests. Originally trained for a career in ballet, in 1976 he became lead vocalist for the ska band Madness when they first formed as the North London Invaders. At this time he took the stage name Dikron Tulane, slightly changing the spelling of his middle name and adopting the name of Tulane University as his new surname. However, when he was accepted at the London Drama Centre, where he studied to become an actor from 1977–80, he changed the spelling of his name to Dikran Tulaine.

Tulaine worked in the British theatre and television during the 1980s, at times touring in Paris, Croatia, Greece and the United States.

In 1982, Tulaine worked at the Citizens Theatre in Glasgow, Scotland. In 1983 he appeared as part of the Second Company in all three parts of Shakespeare's Henry VI, as part of BBC Television Shakespeare, a series of the complete works as known at the time.

In 1985-86, he performed at the Royal National Theatre as part of the McKellen-Petherbridge Group, founded by Ian McKellen and Edward Petherbridge. As part of the group, he appeared in Chekov's The Cherry Orchard, Sheridan's The Critic, and Webster's The Duchess of Malfi in repertory.

In the early 1990s, Tulaine relocated to Atlanta, Georgia, in the US to work with the Atlanta Shakespeare Company, where he stayed for about 8 years, acting and directing. In the early 1980s, Tulaine began acting in film and television, and eventually he moved to New York City, New York, to increase his career opportunities. Besides working in film, he continues to be active in theater and as a performance Artist.

Margaret Jefferson quotes Tulaine on morality in her 2004 review of Brecht's Mother Courage and Her Children.

Tulaine also does "voice-over" work and reads for audiobooks, releasing The Iliad in 2012 and Drinking Midnight Wine in 2013.

In 2015 he played the role of Lech Choinski in "Payback" the 20th episode of the 5th season of the CBS crime drama Blue Bloods.