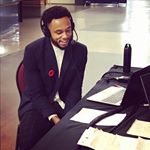 Wide receiver who made his NFL debut in 2012 for the Houston Texans.

He played at Ohio State University, before being selected in the 3rd round of the 2012 NFL draft.

He was suspended for multiple games while at Ohio State due to off-field controversies.

He was born and raised in Alliance, Ohio.

At Ohio State he caught passes from quarterback Terrelle Pryor.