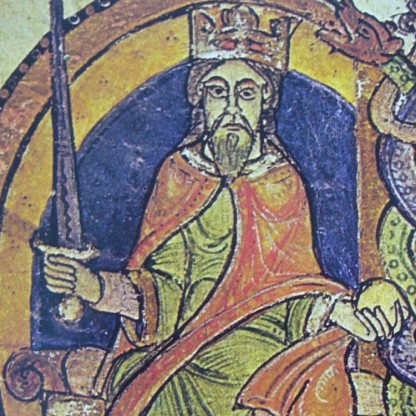 ✎ About David I of Scotland

David I of Scotland Net Worth

David I of Scotland was bornon 1084 in Scotland, Scottish, is Ruler. David I was a 12th century king who ruled over Scotland from 1124–1153. He was born as the youngest son of Malcolm III of Scotland and Margaret of Wessex, and in spite of being a prince his early life was fraught with difficulties. His father and a brother were killed during an invasion of Northumberland when David was a young boy and life dealt another blow to him when his mother expired shortly afterwards. His uncle Domnall Bán took over the kingdom of Scotland and sent David and his surviving brothers into exile. David, then went to live with brother-in-law, King Henry I of England. Years later, following several political upheavals in Scotland, David finally became the King of Scotland with the support of Henry I. His reign saw many social, political and religious changes take place in the country, and he is considered to be one of the most significant rulers to have ever ruled over the Kingdom of Scotland. Medieval Scotland underwent a radical change during his regime, leading modern scholars to term the changes which took place in Scotland while he was the king as ‘Davidian Revolution’. He was especially well-known for founding monasteries and for implementing the ideals of Gregorian Reform
David I of Scotland is a member of Historical Personalities

Some David I of Scotland images 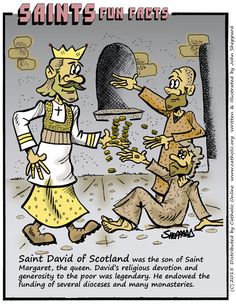 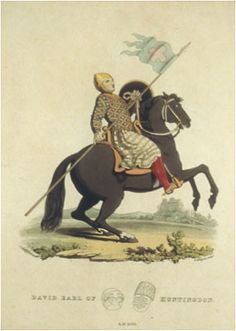 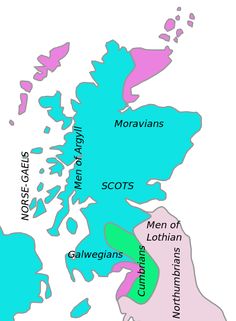 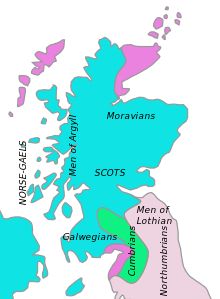 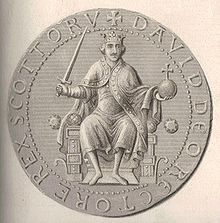 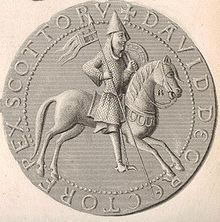 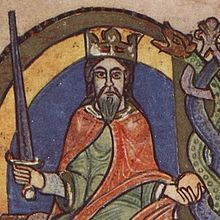 In the modern period there has been more of an emphasis on David's statebuilding and on the effects of his changes on Scottish cultural development. Lowland Scots tended to trace the origins of their culture to the marriage of David's father Máel Coluim III to Saint Margaret, a myth which had its origins in the medieval period. With the development of modern historical techniques in the mid-19th century, responsibility for these developments appeared to lie more with David than his father. David assumed a principal place in the alleged destruction of the Celtic Kingdom of Scotland. Andrew Lang, in 1900, wrote that "with Alexander [I], Celtic domination ends; with David, Norman and English dominance is established".

In the 20th century, several studies were devoted to Normanisation in 12th-century Scotland, focusing upon and hence emphasising the changes brought about by the reign of David I. Græme Ritchie's The Normans in Scotland (1954), Archie Duncan's Scotland: The Making of the Kingdom (1974) and the many articles of G. W. S. Barrow all formed part of this historiographical trend.

The lands in question consisted of the pre-1975 counties of Roxburghshire, Selkirkshire, Berwickshire, Peeblesshire and Lanarkshire. David, moreover, gained the title princeps Cumbrensis, "Prince of the Cumbrians", as attested in David's charters from this era. Although this was a large slice of Scotland south of the river Forth, the region of Galloway-proper was entirely outside David's control.

In the 1980s, Barrow sought a compromise between change and continuity, and argued that the reign of King David was in fact a "Balance of New and Old". Such a conclusion was a natural incorporation of an underlying current in Scottish historiography which, since william F. Skene's monumental and revolutionary three-volume Celtic Scotland: A History of Ancient Alban (1876–80), had been forced to acknowledge that "Celtic Scotland" was alive and healthy for a long time after the reign of David I. Michael Lynch followed and built upon Barrow's compromise solution, arguing that as David's reign progressed, his kingship became more Celtic. Despite its subtitle, in 2004 in the only full volume study of David I's reign yet produced, David I: The King Who Made Scotland, its author Richard Oram further builds upon Lynch's picture, stressing continuity while placing the changes of David's reign in their context.

Although avoiding stress on 12th-century Scottish "barbarity", the Lowland Scottish historians of the later Middle Ages tend to repeat the accounts of earlier chronicle tradition. Much that was written was either directly transcribed from the earlier medieval chronicles themselves or was modelled closely upon them, even in the significant works of John of Fordun, Andrew Wyntoun and Walter Bower. For Example, Bower includes in his text the eulogy written for David by Ailred of Rievaulx. This quotation extends to over twenty pages in the modern edition, and exerted a great deal of influence over what became the traditional view of David in later works about Scottish history. Historical treatment of David developed in the writings of later Scottish historians, and the writings of men like John Mair, George Buchanan, Hector Boece, and Bishop John Leslie ensured that by the 18th century a picture of David as a pious, justice-loving state-builder and vigorous maintainer of Scottish independence had emerged.

Since Robert Bartlett's pioneering work, The Making of Europe: Conquest, Colonization and Cultural Change, 950–1350 (1993), reinforced by Moore's The First European Revolution, c.970–1215 (2000), it has become increasingly apparent that better understanding of David's "revolution" can be achieved by recognising the wider "European revolution" taking place during this period. The central idea is that from the late 10th century onwards the culture and institutions of the old Carolingian heartlands in northern France and western Germany were spreading to outlying areas, creating a more recognisable "Europe". Scotland was just one of many "outlying" areas.