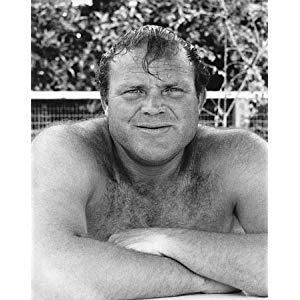 Dan Blocker is one of the true television immortals, having played Hoss Cartwright -- the heart and soul of Bonanza (1959) -- for 13 seasons, before his untimely death in 1972 at the age of 43. "Bonanza" was the most popular TV series of the 1960s, ranked #1 for three straight seasons (1964-65 through 1966-67) and spending a then-unprecedented nine seasons in the Top 5.
Dan Blocker is a member of Actor

Dan Blocker is one of the true television immortals, having played Hoss Cartwright -- the heart and soul of Bonanza (1959) -- for 13 seasons, before his untimely death in 1972 at the age of 43. "Bonanza" was the most popular TV series of the 1960s, ranked #1 for three straight seasons (1964-65 through 1966-67) and spending a then-unprecedented nine seasons in the Top 5. After Blocker's death, "Bonanza" -- still in the Top 20 with Hoss after being #8 the previous year -- didn't last another entire season.

The character of Hoss was conceived as a stereotype: The Gentle Giant. The 6'4", 300 lbs. Blocker filled Hoss's cowboy boots and ten-gallon hat admirably but brought something extra to the role, a warmth and empathy that helped ground the show. Personal accounts of Blocker testify to the fact that the man was gregarious and friendly to everyone. He brought that upbeat personality to the character of Hoss.

Hoss originally had been conceived as dull-witted, but ironically, Dan Blocker's professional acting career was assured after he moved his family to California so he could pursue a PhD at U.C.L.A. A native of West Texas, he reportedly was discovered while making a call in a phone booth while outfitted in Western garb, including a straw cowboy hat, his standard dress being a native son of Texas, soon after arriving in California. Even after being cast in "Bonanza", he intended to complete his PhD, but the great success of the series made that impossible, due to the work load of 30+ episodes per year necessitating a 7AM-9PM work schedule five days a week.

Donny Dany Blocker made his debut on December 10, 1928 in De Kalb, Texas, weighing in at 14 lbs. He reportedly was the biggest baby ever born in Bowie County. By the age of 12, he already was 6' tall and weighed 200 lbs. (Towards the end of "Bonanza", he reportedly had ballooned past his stated weight of 300 to as much as 365 lbs.) A "TV Guide" story after his death reported that back in Texas, the young Dan once lifted a car off of a man after it slid off a jack and pinned him under the auto.

"My daddy used to say that I was too big to ride and too little to hitch a wagon to," Blocker said, "no good for a damn thing."

His father Ora Blocker was hurt by the Great Depression that began the year after his son Dan's birth. He moved his family to O'Donnell, which is just south of Lubbock, where he ran a grocery store. His "no good" son went to the Texas Military Institute, and in 1946 started his undergraduate work at Hardin-Simmons University (Abilene, Texas), where he played football. It was there he fell in love with acting when he was recruited by a girlfriend to play a role in campus production of Arsenic and Old Lace as they needed a strong man to lift the bodies that the spinster aunts had dispatched up from the cellar.

After graduating in 1950 with a degree in English, Blocker went east where he did repertory work in Boston. A 1960 "TV Guide" article says that he appeared on Broadway in the 1950-51 production of King Lear, which starred Louis Calhern. The draft soon ended his apprenticeship, and he served in the Army in the Korean War, making sergeant.

After being demobilized in 1952, he attended attended Sul Ross State Teacher's College (Alpine, Texas), earning a master's degree in dramatic arts. He taught English and drama at a Sonora, Texas high school before moving to Carlsbad, New Mexico, where he taught sixth grade. He then moved his family to California, where he again taught school while preparing for his PhD studies.

Blocker picked up bit parts in television, making his debut as a bartender in The Sheriff of Cochise (1956). His career rise was steady and rapid, and he appeared on many Westerns, including Gunsmoke (1955), Have Gun - Will Travel (1957), The Rifleman (1958), and Maverick (1957). He claimed his turn as Hognose Hughes on "Maverick", the comic Western starring James Garner, was the seminal role of his career. As Hoss, Blocker would often star in light-hearted episodes on "Bonanza".

He was cast in the recurring role of "Tiny" Carl Budinger in the short lived Western series, Cimarron City (1958). Its cancellation after one season made him available for "Bonanza", which was "Cimarron City" creator David Dortort's next project. He had previously appeared on Dortort's Western series, The Restless Gun (1957).

"Bonanza" debuted in September 1959 on Saturdays at 7:30PM on N.B.C., which was owned by R.C.A., opposite the popular Perry Mason (1957), the #10 rated show for the 1959-60 season. The new Western was shot in color, and R.C.A. made color TV sets and saw the program as a good advertisement for its wares. The company sponsored the first two seasons of the show, and the sponsorship and R.C.A.'s ownership of N.B.C. was likely why it wasn't canceled after its shaky first season, when it placed #45 in the ratings for the 1959-60 season. The following year, it cracked the top 20 at #17, but it wasn't until it was shifted to Sundays at 9PM in the 1961-62 season that it became a ratings phenomenon, coming in at #2. It was the first of nine straight seasons in the top 5.

Once "Bonanza" was ensconced as America's favorite Western, Blocker and his three co-stars, Lorne Greene, Pernell Roberts and Michael Landon were paid an extremely handsome salary that eventually rose to approximately $10,000 per episode each by the time Roberts quit after the sixth season, its first at #1. Commenting on Roberts' departure, Landon said, "After he left we took one leaf out of the dining room table and we all made more money because we split the take three ways instead of four." Salary, royalties from Bonanza-related merchandise and business ventures (Blocker started the Bonanza Steak House chain in 1963), and an eventual $1-million payout from N.B.C. to buy out the residual rights of each of the three remaining stars made them all rich.

"Bonanza" made Dan Blocker a very wealthy man, but more importantly, it made him a television immortal. The series continues to be re-run in syndication 40 years after Hoss exited the stage.